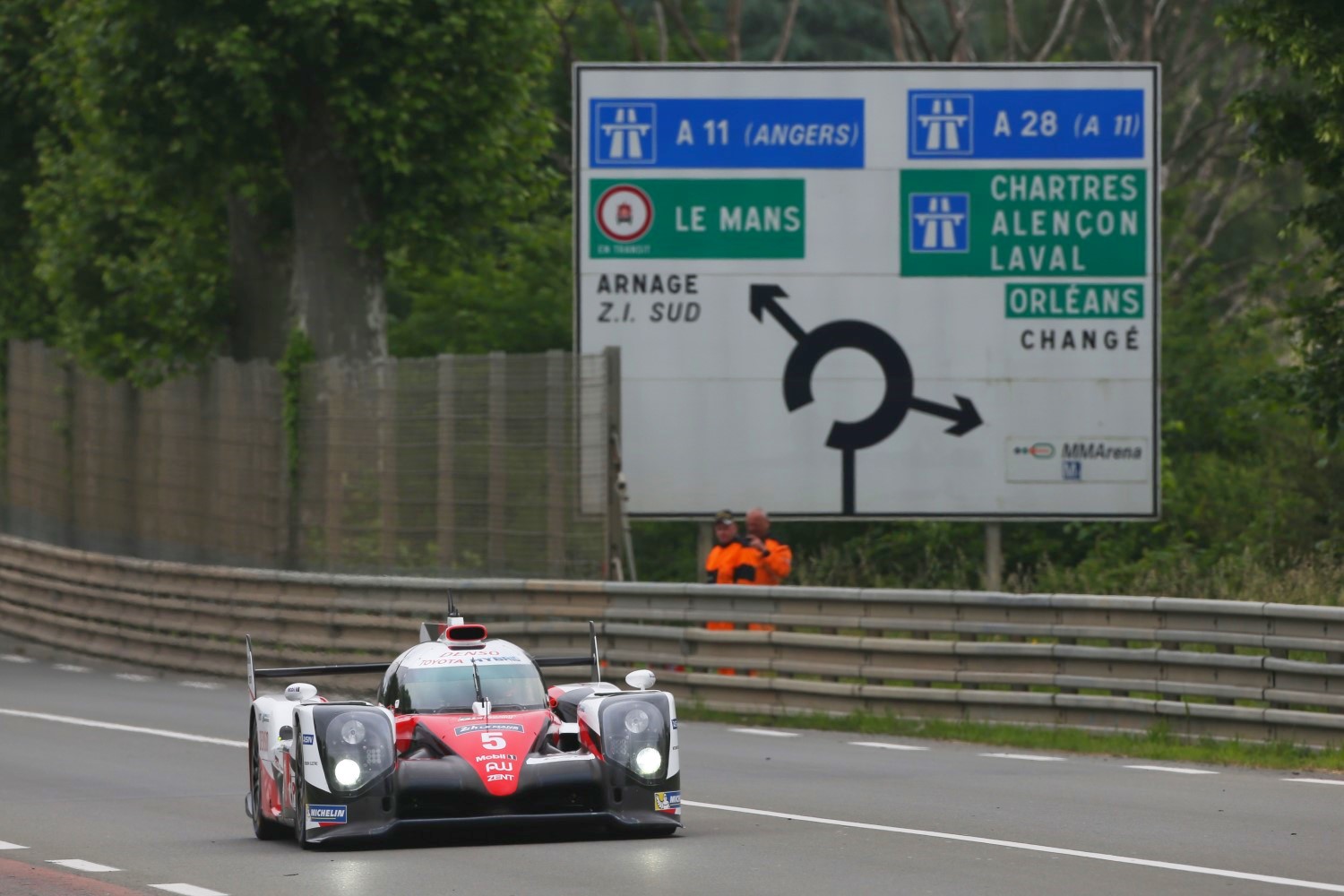 TOYOTA GAZOO Racing is prepared and positive ahead of the 84th running of the legendary Le Mans 24 Hours, the highlight of the 2016 FIA World Endurance Championship (WEC) season.

TOYOTA enters Le Mans for the 18th time, having made its debut in 1985, and travels to France looking for its fifth podium finish at the Circuit de la Sarthe, having recorded a best result of second four times.

In the driving seat of the #5 TS050 HYBRID will be 2014 World Champions Anthony Davidson and Sebastien Buemi joined by Kazuki Nakajima, who set the pole position time at Le Mans two years ago. The #6 car features three-time Le Mans pole winner Stephane Sarrazin alongside Mike Conway and Kamui Kobayashi.

The battle with former winners Audi and Porsche sees the new-for-2016 TS050 HYBRID compete at Le Mans for the first time. The 1,000hp prototype has been optimized specifically for this race and features significant upgrades compared to the TS040 HYBRIDs which finished sixth and eighth last year.

Intense development of the new 2.4litre, V6 turbo engine at Higashi-Fuji technical center in Japan has delivered an efficient and powerful powertrain when combined with the battery-based 8MJ hybrid system.

[adinserter name="GOOGLE AD"]In parallel, a new chassis has been developed for 2016 at TOYOTA Motorsport GmbH in Cologne, with almost all parts redesigned and optimized for weight and performance. A low downforce aerodynamic package will make its race debut at Le Mans following a successful test at the Circuit de la Sarthe last weekend.

TOYOTA travels to Le Mans determined to build on the race-winning pace shown in the last WEC race at Spa-Francorchamps, where the TS050 HYBRIDs looked on course for victory until engine problems struck. Thorough investigation of the data has established that the issue was specific to the Spa circuit, caused by the car ‘bottoming’ through the undulating Eau Rouge corner.

Despite the disappointing end result in Belgium, the overall speed of the TS050 HYBRIDs has raised the team’s hopes for Le Mans, where it expects to challenge at the front, inspired by the goal of winning the race for the first time.

The official test on 5 June raised hopes of a closely-fought race. The fastest TS050 HYBRID recorded a lap 2.124secs faster than the best TOYOTA time from the 2015 test, despite a 10% reduction of fuel consumption required by regulations. Both cars demonstrated reliability, completing a total of 177 laps, 2412km.

Endurance is equally important as performance at Le Mans, which features almost 35 hours of driving until the checkered flag waves, starting on Wednesday 15 June with a four-hour practice session at 16.00 before 120 minutes of qualifying begin at 22.00.

Qualifying continues on Thursday with another pair of two-hour sessions (19.00 & 22.00). The starting grid is decided by the fastest single lap from any of the qualifying sessions.

The traditional drivers’ parade in the city center on Friday afternoon gives fans a unique chance to get up close to the drivers before race weekend, which begins with a 45-minute warm-up at 09.00. The race starts at 15.00 on Saturday.

Toshio Sato, Team President: “Le Mans is the highlight of our year and it has been the focus of most of our hard work in pre-season. We were able to confirm the strong potential of the car in Spa and based on this, and the fact we have developed our TS050 HYBRID particularly with Le Mans in mind, I am excited to see how it performs. But this race is about much more than the car itself; it is a very demanding race for the whole team, including the drivers. In such difficult conditions it is important to give our best possible performance and avoid mistakes; then we will see what result we can achieve. Of course, our ultimate target, like all the LMP1 manufacturers, is to win and we are ready to fight. We will approach this goal at the end of this long race by working with maximum determination and concentration for the entire 24 hours."

Anthony Davidson (TS050 HYBRID #5): “I can’t wait to get the whole process of the Le Mans 24 Hours underway once again this year. It’s the one race we drivers all want to win and it’s what we work towards during the hard winter months of testing. It is such a special event and I have been lucky enough to stand on the podium twice and that’s an experience you never forget. It’s fair to say it has been a challenging start to the year for car #5, particularly the last race at Spa when we were on our way to the win until a technical problem, but that only makes me even more determined for Le Mans. There’s no better place to turn around our season."

Sebastien Buemi (TS050 HYBRID #5): “I am really motivated for Le Mans as usual. It is a fantastic track and it’s always amazing to be there for race week. Unfortunately it only happens once a year so you really need to soak up the atmosphere and enjoy this special event. We had a positive test day with our new TS050 HYBRID, which is a big step forward compared to last year’s car, so I think we can be in the fight this year. The car feels good and we have seen at Spa that we are able to compete at the front. There’s still a lot of work to do in practice and qualifying to get the most out of our car, but the first signs are positive."

Kazuki Nakajima (TS050 HYBRID #5): “Le Mans is an impressive event. I remember the first time I raced there in 2012, the scale of the race and the atmosphere, especially before the start, was unbelievably exciting. It was something I had never experienced in motorsport. I remember watching the race on TV, especially in 1998 and 1999 when the TOYOTA TS020 raced, so to experience it myself is always special. I very much enjoy the circuit, which is really challenging for a driver. The cars reach high top speeds on the long HunaudiÃ¨res straight and there are many fast corners so it’s really fun to drive. I’m ready and looking forward to the week."

Stephane Sarrazin (TS050 HYBRID #6): “This race is just amazing; a special event on a special track. It is the longest circuit of the season with the most history and as a French driver it’s a great experience. We work all year to be in good shape for Le Mans. When we are doing 30-hour endurance tests, it is to be ready for this race. This year we are more a challenger than favorite but maybe that’s a good position to be in. We took a big step with the TS050 HYBRID; the car is really competitive and we showed at Spa that we can lead a race and challenge for victory. I think it will be an exciting race this year and I am confident we can fight."

[adinserter name="GOOGLE AD"]Mike Conway (TS050 HYBRID #6): “We approach Le Mans with a lot of anticipation this year. It is a magical event with all its history and it’s the one race you focus on at the start of every year; it comes around very quickly. There are more unknowns this year and we are eager to know exactly where we stand. Even after all the thousands of kilometers we’ve done already, until we do long stints in practice and then flat-out qualifying runs, we don’t know exactly how we compare. The performance steps from all the LMP1 manufacturers have been really impressive in the last year or so. We know we are close; we will find out where we stand very soon."

Kamui Kobayashi (TS050 HYBRID #6): “We all enjoy this event and look forward to it from the start of the year. I was surprised when I first drove this track because the lay-out is fantastic and compared to other street circuits the surface is relatively smooth, with good grip. The Le Mans 24 Hours is a truly world-famous race so to be competing there makes me proud. There are a lot of races in the world, and I’ve raced on many tracks, but Le Mans really stands out. It would be amazing to win the race as a Japanese driver in a Japanese team, especially in my first Le Mans with TOYOTA. Probably we are not the favorites this year but we are close and I think we can challenge."