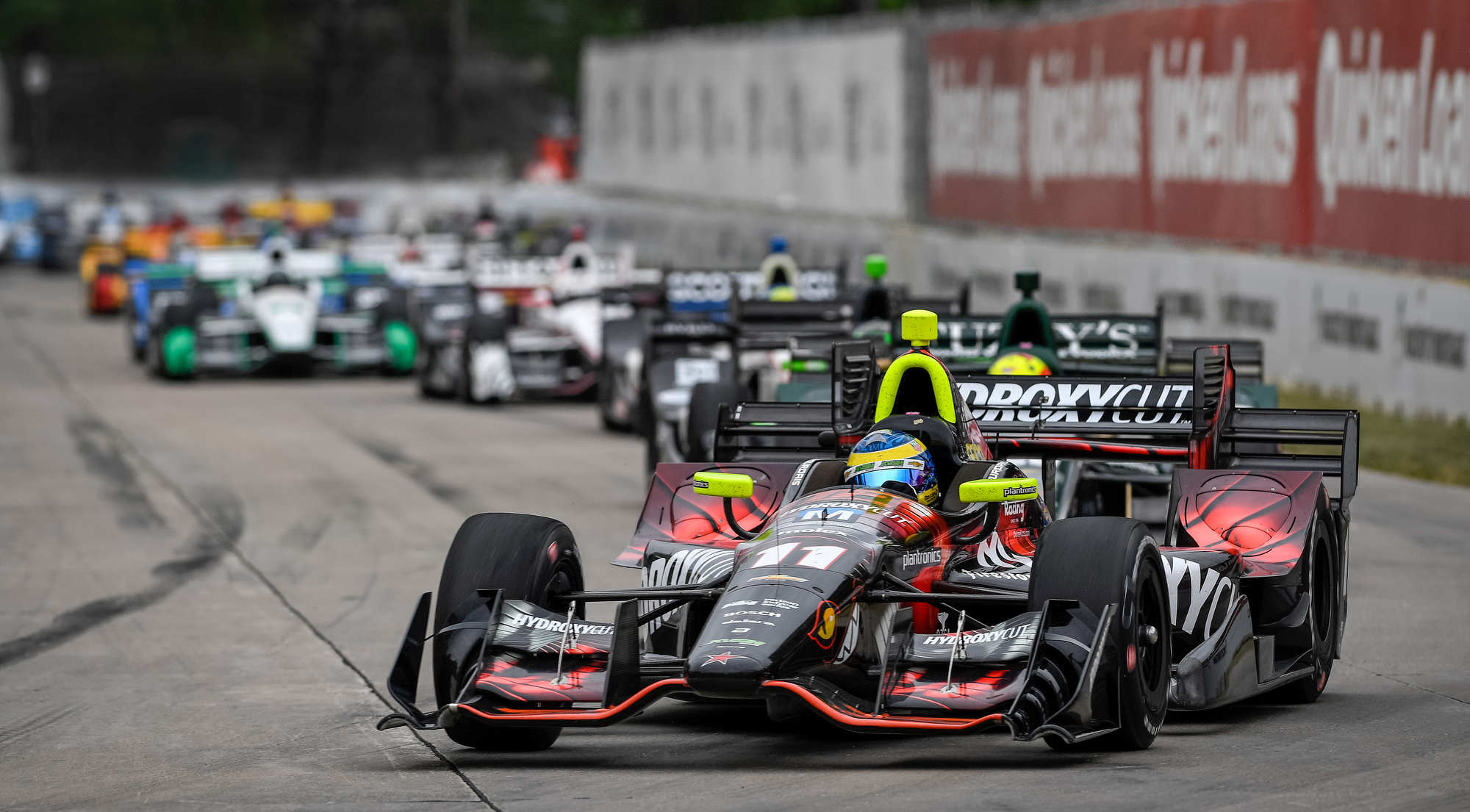 After a rather festive month reveling in the pomp and circumstance of the 100th installment of The Greatest Spectacle in Racing, a sense of normalcy returned to the Verizon IndyCar Series this weekend in Detroit. And while I wouldn't say we learned anything particularly new, the Chevrolet Belle Isle Detroit Grand Prix Presented by Quicken Loans did provide some important reminders.

On Saturday in Chevrolet Dual 1, Sebastien Bourdais executed clever strategy by team owner Jimmy Vasser to score his 35th career victory and first of 2016. Although what could be described as something of an invisible start to 2016, the four-time Champ Car titlist reminded us Saturday that he remains as good as anyone on his day.

Sunday in Dual 2, Will Power did what Will Power often does: drives his best when you expect it least. Power, of course, had been in the midst of what was for him an extended slump without scoring a victory in more than a year. Further, after Saturday's race, the Aussie incurred the criticism of his teammate Juan Pablo Montoya who noted that Power was “desperate" and that said desperation was affecting his driving.

You might remember Power has responded similarly to such criticism before. In 2013 at Fontana Ed Carpenter noted that Power had done what everyone expected him to do the year before by crashing with the series championship at stake. The Aussie then scored what he called his “most satisfying" win edging Carpenter for the win.

And there were other reminders this weekend in Detroit. We'll elaborate on those topics and more in our 2016 Detroit Postscript using a statement/elaboration format.

I've elaborated on Pagenaud's performance so far in 2016 at great length (Barber Postscript, Indy GP Postscript. The Frenchman followed two second-place finishes to open the season with three consecutive wins prior to the Indianapolis 500. A rather forgettable day at Indy, in which he incurred three pit-road penalties, resulted in a 19th place finish.

However, Pagenaud quickly re-established his dominance in Detroit winning pole and leading the first 40 laps. While he ran out of fuel on the final lap and finished 13th, Pagenaud won pole again for Sunday's race, again led the first 40 laps, and this time came home second.

While four-time series champion Scott Dixon remains a manageable 80 points adrift of the Frenchman, don't let the fact Pagenaud didn't win this weekend fool you: he was the fastest man in the field – again!

Yes, there is a long way to go in the championship, a lot can happen. Just know if Pagenaud isn't showing any signs of backing up.

Currently, Helio Castroneves is the greatest threat to Pagenaud

As previously mentioned Dixon sits second in the standings, with a manageable gap. We've also seen Dixon and Chip Ganassi Racing pull this stunt before. I was at Iowa three years ago, when Team Ganassi endured an absolutely miserable weekend. In one of the qualifying heats the Friday before the race I was standing in turn 1 when Ana Beatriz absolutely blew past Dario Franchitti and began gapping him shortly thereafter. None of the Ganassi cars qualified or finished that weekend in the top-10, and there was visible frustration on the faces of both Franchitti and Dixon.

[adinserter name="GOOGLE AD"]You may also remember that after that race, Team Ganassi headed off to Sebring and seemingly found whatever they were lacking in Iowa. Dixon, Charlie Kimball, and Franchitti finished 1-2-3 at the next race in Pocono. Dixon then swept the doubleheader the following weekend in Toronto, and just like that Dixon championship campaign No. 3 had begun.

To summarize, I know better than to discount Dixon, managing director Mike Hull and Team Ganassi. Heck, their current relative lack of form (the team has two podium finishes in 2016 compared to 13 for Penske) could all be part of some master plan or Jedi mind trick.

That said, if we are to go off current form it is Helio Castroneves and not Dixon who seems to be the greatest threat to Pagenaud. While people don't usually associate bad luck with the Brazilian, let's consider Castroneves' 2016 so far.

To summarize, in addition to his contact at Indy, Castroneves has had 3 legitimate chances at victory, in which he was not passed once on track nor committed a driver error of any kind, taken away from him.

Yes, Pagenaud has clearly been the best driver on the circuit in 2016 thus far. But No. 2 has been Castroneves. And you have to think some good fortune will be coming Castroneves' way soon.

Narratives, whether real or perceived, can be very powerful. And while I'm not in the business of telling people what to think, a narrative has emerged surrounding the event in Detroit that I don't believe is entirely fair.

Essentially, the thinking goes something to the effect of: Belle Isle, the tiny island in the middle of the Detroit River which hosts the Verizon IndyCar Series doubleheader event annually, is a Mickey Mouse street circuit in a less than desirable city and generally a miserable follow-up to the Indianapolis 500. An exciting oval track, according to many, would be the better follow-up to the series' showcase event.

And yes, no one is mistaking Belle Isle for Spa or Monza, or Detroit for Long Beach. As for an oval, Milwaukee was of course, the follow up to Indy for decades, but let's face facts: the Indy-Milwaukee back-to-back hasn't been a thing for two decades now. While there's great history at Milwaukee the event has simply not drawn a good enough crowd in recent years.

People will suggest other ovals such as Kentucky and Fontana. Obviously, last year's Fontana race was a thriller for the ages, but also something of a perfect storm that would not have been replicated. Also, such thinking presumes there is an oval available that could conduct a viable event. Unfortunately, 5000 people in the grandstands as we saw at Fontana makes the event non-workable from a business standpoint.

Of course, the prospect of 5000 people showing up isn't an issue in Detroit. The event announced 95,000 over three days, which by my math would be more than double Milwaukee and Fontana combined last year.

As for Belle Isle, improvements on the island in recent years have long rendered the old ‘Hell Isle' moniker, so 2001. Improvements are expected to continue to Belle Isle, that should help the racing, which in my opinion is already pretty good, improve in the coming years.

Yes, note the Penske group is making ongoing investments in the race.

Further, if you've ever been to the event you know that the City of Detroit is very welcoming to IndyCar. The city, it's residents, the event organizers and volunteers want IndyCar, and view the series as a partner in helping Detroit rebuild. And we all know IndyCar is not viewed in this fashion everywhere.

Look, I get Belle Isle isn't perfect. And when applying the ‘relative to the Garden of Eden' standard, it doesn't match up. However, instead of constantly focusing on what the event isn't, a little focus on what the event is, might actually reveal that IndyCar doesn't need a good follow-up to the 500; it already has one.

Conor Daly scored a career-best finish of second in Dual 1 this weekend. While Daly needs to improve his qualifying, he and Dale Coyne Racing have found themselves out front on three occasions in 2016, with legitimate chances to score top-5 results. And the popular American has two finishes of 6th and one second in the last four races.

Do these numbers mean anything to you: 11, 19, 21, 19, 20, 16, 22, 19? Those are Jack Hawksworth's 2016 finishes. Although the likable Brit has some strong qualifying efforts, a year-and–a-half into his tenure with A.J. Foyt Racing, the results simply are not there. And I can't imagine a certain grumpy not-exactly-known-for his patience Texan doesn't have Hawksworth on a short leash right now.

Continuing on the theme of numbers allow me to present the following: 15, 21, 19, 21, 19, 22. Those would be Marco Andretti's 2016 qualifying results on road and street courses. This is a category that of course, has long been an Achilles Heel for the third-generation IndyCar driver, which continues to be a problem in year 11 of his IndyCar career. Andretti currently sits 17th in the standings, after finishing 9th Sunday in Dual, his first top-10 of the season 2. And right now, you'd be hard-pressed to find a metric with Andretti that points anywhere in a positive direction.

Really quick, allow me to say I 100% agree with Will Power's sentiment regarding the Virtual Safety Car. Obviously, the details in executing the VSC would need to be ironed out by INDYCAR, but in the basic interests of fairness, this is something the series should absolutely explore.