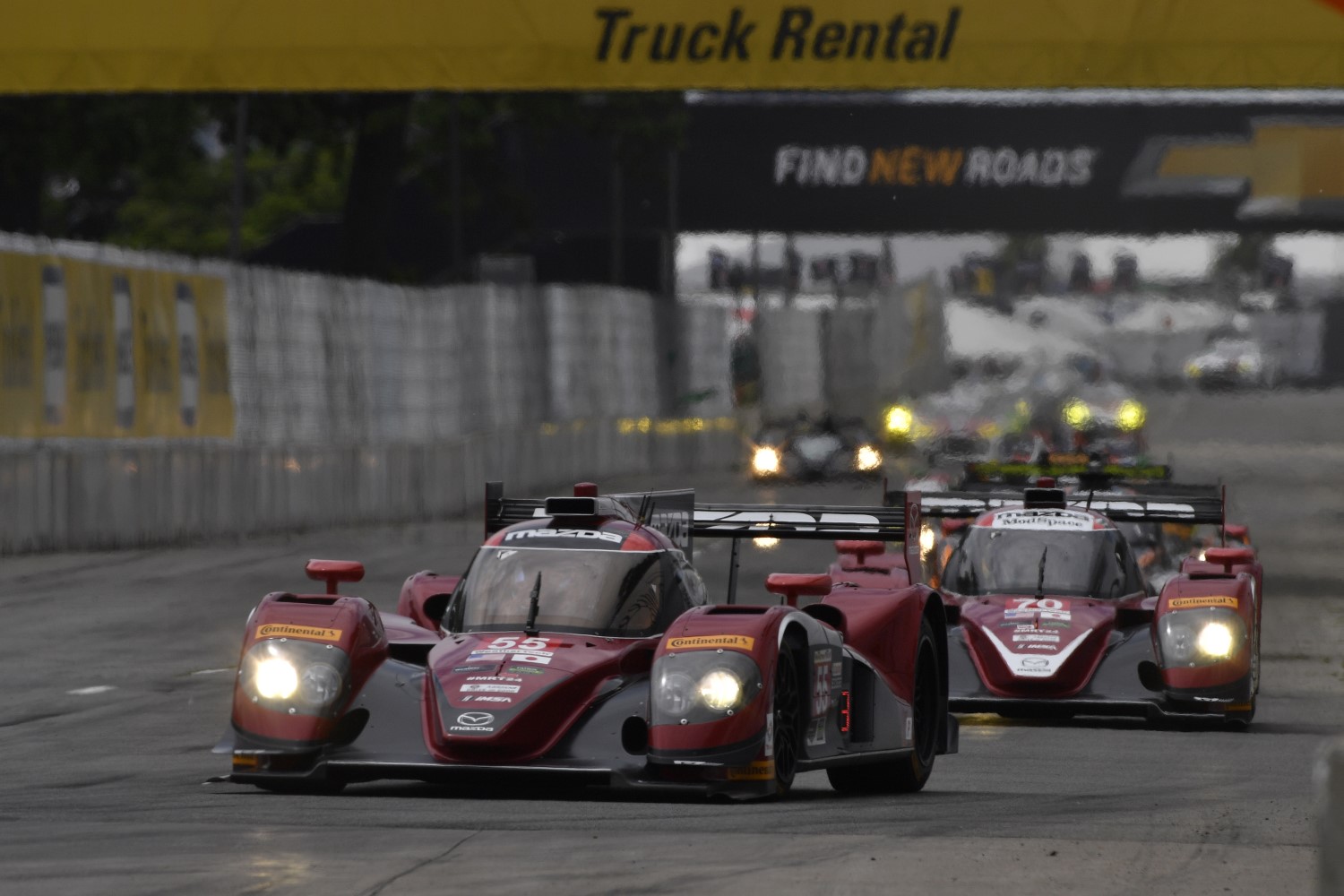 The bad news: Neither the No. 55 or the No. 70 car felt particularly comfortable on the tight, very bumpy street course, and the No. 70 had to undergo an engine change and had a spin in the Saturday morning warm-up session.

"I think everyone's a little in shock right now, that we would get our first podium here in Detroit of all places. That really does say something for Mazda saying ‘Never Stop Challenging.' We didn't have the pace initially in the weekend but the team got together and gave us a great race car. It was great in traffic and on a long stint on tires. We let everyone else make mistakes and ended up third. It's a big confidence booster leading into the rest of the season."

[adinserter name="GOOGLE AD"]The two Mazdas dominated at their home track, Mazda Raceway Laguna Seca, the last WeatherTech Championship race, but minor problems compounded over the course of the day to rob the team of decent finishes. The Mazda chassis is built to be better on smooth, flowing courses like Laguna Seca and, fortunately for the team, the next race on the schedule at the newly-repaved, 3.4-mile Watkins Glen International, where the Sahlen's Six Hours of the Glen will be held June 30-July 3.

"Today was all about managing what we had and we just needed to get across the finish line," said Joel Miller. "We let our competition beat themselves and we just stuck to our game. We're ready to put this one behind us and go on to Watkins Glen."

THE VIPER STRIKES: The No. 33 Viper Exchange/Gas Monkey Garage Dodge Viper GT3-R of Jeroen Bleekemolen and owner-driver Ben Keating hasn't been a major factor in the GT Daytona results this season, but that changed at Detroit with a convincing 2.489-second victory over the No. 73 Park Place/Justice Brothers Porsche 911 GT3 R.

It's a little surprising, as the big V-10 Viper might seem more at home on longer, faster courses, but that's how close the competition is in the GT Daytona class.

It was the team's first victory since last September. And for Keating, who owns the world's largest volume Viper store, it was especially gratifying. "It's a huge deal winning with the Viper in its hometown," Keating said. "I have a lot of great relationships with all the Viper people at the Conner Avenue plant where they are hand-built right here in Detroit. There were a lot of emotional people who take a lot of pride in the Vipers."

Keating, by the way, was one of nine IMSA drivers who boarded a private jet bound for France to participate in Sunday's 24 Hours of Le Mans test day. Several other drivers and team members, including Saturday's winner – brothers Jordan and Ricky Taylor, drivers of the No. 10 Konica Minolta Wayne Taylor Racing Chevrolet Corvette Daytona Prototype – made it to Le Mans via commercial flights.

SAIL AWAY: At the Mobil 1 Twelve Hours of Sebring, Ben Keating activated a relationship with the Gas Monkey Garage, owned by Richard Rawlings, star of the TV show "Fast ‘n Loud," and of multiple Dodge performance car commercials.

Keating and Rawlings announced at Detroit the "Cruisin' with the Monkey" vacation trip, scheduled for March 19-26, aboard the Holland America ship Nieuw Amsterdam. It leaves from Fort Lauderdale, and ports include Key West, Cozumel and the Cayman Islands. Prices, for double occupancy, range from $1,699 to $4,799, plus $230 per person in taxes and fees. There's room for 2,000 fans. The website is CruisinwiththeMonkey.com.

THIRD OF FOUR TPNAEC RACES COMING UP: Within the WeatherTech Championship titles themselves is a special competition – the Tequila Patron North American Endurance Cup, awarding the driver and teams that perform best at the four longest races – Daytona, Sebring, Watkins Glen and Petit Le Mans at Road Atlanta.

Daytona and Sebring are in the books, and the Sahlen's Six Hours of the Glen is coming up next in the WeatherTech Championship schedule. In drivers' points, the lead in Prototype is a tie, held by Scott Sharp, Johannes van Overbeek, Pipo Derani and Ed Brown of the Tequila Patron ESM Honda-powered Ligier, tied with Joao Barbosa, Christian Fittipaldi and Filipe Albuquerque of the No. 5 Action Express Mustang Sampling Chevrolet Corvette DP – all with 26 points each.

In manufacturers' points, Honda is one point ahead of Chevrolet, 32 to 31.

TAKING A CHANCE: The No. 5 Action Express Mustang Sampling Corvette DP was the fastest qualifier for the Prototype class, but while trying to get one more tenth off his time, Christian Fittipaldi spun the car in the closing minutes of the session. No big deal, but teams are required to start the race on the tires they qualified on, with the rules allowing only one tire to be changed.

Fittipaldi flat-spotted three of the tires, though, so he had a decision to make: Change one, and start the race up front on two flat-spotted tires, or change all four, and start in the back.

He chose to start in the front. "I wasn't sure what to expect after the spin," said Fittipaldi. "I flat-spotted three tires big time. We managed to change one because you can do that in the rules. Then we babied the other two. The car was awesome to drive on right-hand corners. It was a little bit harder to drive on left-hand turns."

It worked out OK: He and co-driver Joao Barbosa finished second, and are now tied for the points lead.