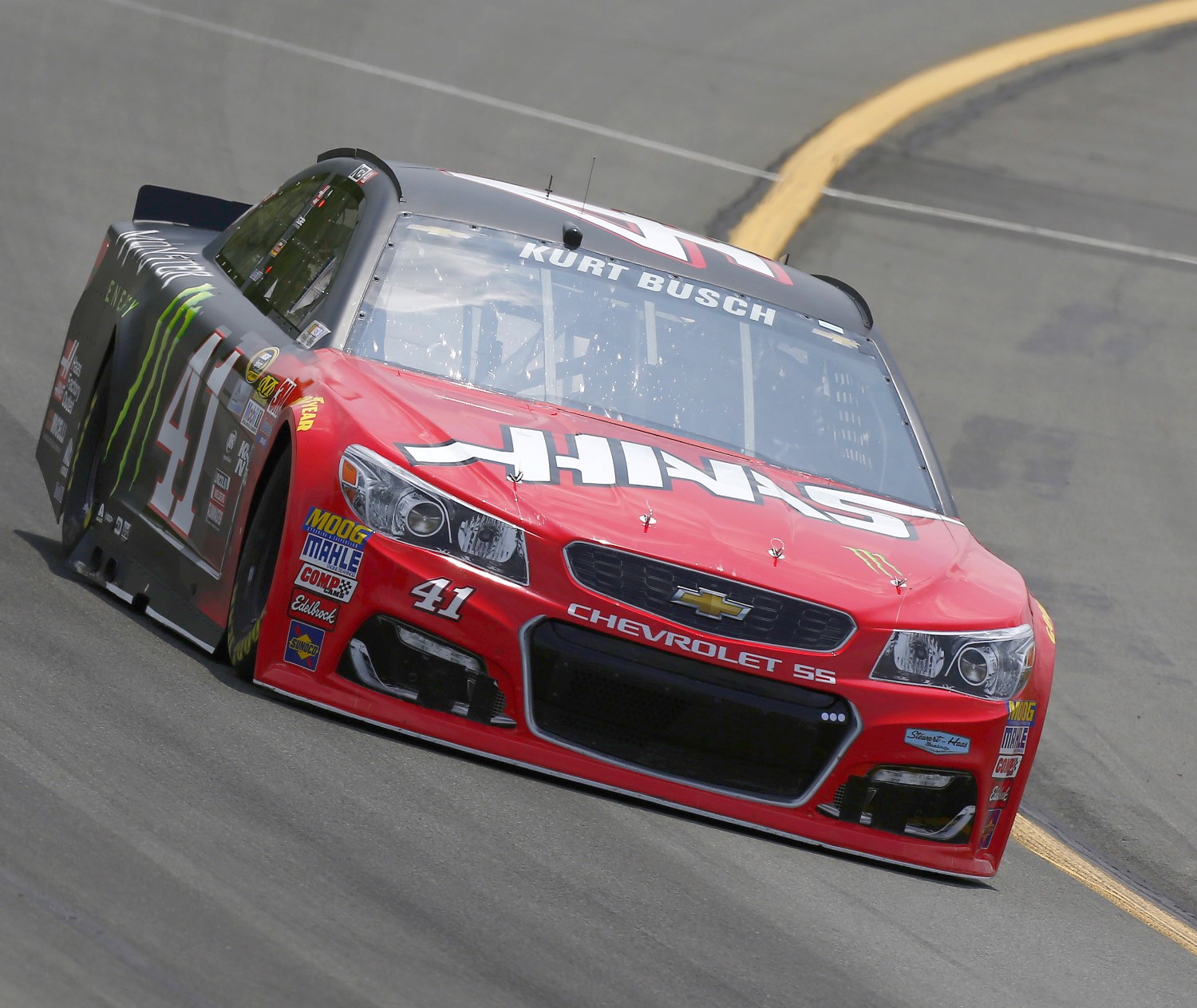 Stewart-Haas Racing's Kurt Bush nabbed his first win of 2016 in his Chevy by holding off the Hendrick Chevy of Dale Earnhardt Jr. and the Penske Ford of Brad Keselowski.

Rookie Chase Elliott and Joey Logano rounded out the top-5.

Monitoring a dwindling fuel tank and powerful cars in his rearview mirror, Kurt Busch held off Dale Earnhardt Jr. and Brad Keselowski for his first win of the 2016 season in Monday's Axalta "We Paint Winners" 400 at Pocono Raceway.

Busch took the lead at Lap 128 and immediately began playing a fuel-milege game — even shutting off the engine — as all the leaders worked to conserve fuel.

"It's going to be a game over who can go the fastest and save the most," No. 24 crew chief Alan Gustafson said via in-car radio around Lap 134 of 160.

[adinserter name="GOOGLE AD"]Earnhardt stretched his No. 88 Hendrick Motorsports Chevrolet across the finishline for a runner-up finish, while polesitter Keselowski passed rookie Chase Elliott in the final 20 laps for third in his No. 2 Team Penske Ford. Elliott, who led 51 laps, finished fourth, while Joey Logano rounded out the top five in his No. 22 Team Penske Ford.

Keselowski ran into trouble early at The Tricky Triangle: The No. 2 Team Penske Ford was blackflagged at Lap 24 for unapproved body adjustments and thus, was forced to pit under caution and serve a pass-through penalty under green. The penalty caused Keselowski to drop back to 38th in the field.

Keselowski's teammate and outside polesitter Logano also encountered hurdles early in the 400-miler, as Ryan Newman hit the No. 22 from behind several times, crunching in Logano's bumper and causing him to fall back in the field momentarily.

Tony Stewart's day at The Tricky Triangle ended prematurely, as the No. 14 got loose at Lap 92, hit the wall and teammate Danica Patrick, who then collided with Landon Cassill. Stewart returned to the track after a trip to the garage, finishing 34th.

An early pit road incident along with a freaky lug nut bounce late in the race prevented Martin Truex Jr. from any opportunity of defending his Pocono title in Monday’s rain-delayed Axalta 400.

Truex, who was coming off a record-breaking victory in last week’s Sprint Cup Series race at Charlotte Motor Speedway, saw his fortunes take a turn in the wrong direction as the Furniture Row Racing driver fought back to post a 19th-place finish at Pocono Raceway’s 2.5-mile triangular track.

The first incident that halted Truex’s momentum came following a competition caution on Lap 15 of 160. Positioned in 12th place, Truex came down pit road for two right-side tires and it appeared he was going to leave pit road in the top-five.

But as he started to exit his pit stall, his right-front fender took a severe hit by the No. 83 car (Matt DiBenedetto), which also pushed Truex into the wall with more damage to the left-side of his No. 78 Furniture Row/Denver Mattress Toyota.

The incident forced Truex back to pit road for repairs. When the race restarted he was positioned in last place.

Truex kept battling back and was running 16th when a caution came out on Lap 117. Once again he came down pit road for two right-side tires and it appeared that he was going to restart somewhere in the top five.

But as soon as Truex got back on the track his right-rear tire blew. The unimaginable culprit was a flying lug nut from the old tire that landed behind the wheel, shearing off the tire’s inner stem valve.

“It was a fluke, but that’s the way it goes sometimes," said Truex. “We weren’t great, but had a shot at a much better finish than 19th. It was not the weekend we obviously wanted, but you just have to take what is given to you and move on. Michigan (next race) should be a good track for us and hopefully things will go much smoother."

YOU HAD GIVEN YOURSELVES A GRADE OF ‘A’ THIS SEASON, TODAY YOU WERE AN A+. HOW DIFFICULT WAS IT TO SAVE THE FUEL WHILE KEEPING THE LEAD? â€¨“It’s tough to balance everything and when you have a fast car and an interim crew chief and the way that the fuel mileage played out, I didn’t know if we were going to have enough fuel. But, thanks to everybody at Haas Automation, Monster Energy and Stewart-Haas. This is a wonderful win for us. We have been so close all year. It’s a matter of just putting it all together, pit crew, engine, thanks to Hendrick engines, and Chevrolet and everybody that works on these bodies, the chassis’ you name it. It’s just so much fun to drive and to be competitive and to be up front. Thanks a lot."

WHEN THEY TOLD YOU THAT THEY DIDN’T THINK YOU HAD ENOUGH FUEL IN THE TANK WHAT WAS GOING THROUGH YOUR MIND AND HOW DID YOU HAVE TO AMEND YOUR DRIVING FROM THERE? â€¨“I was like, whoa, how many laps shy are we? They said two. These are really long straightaways at Pocono and you have to manage saving fuel as well as maintaining lap time. So many thoughts can go through your head, but I just stuck with the checklist. I just stuck with saving fuel and watching the No. 88 (Dale Earnhardt, Jr.) behind us. Thanks to Gene Haas, Tony Stewart, everybody at Haas Automation, Monster Energy it’s our first win in the Cup Series for Monster, it’s awesome to be able to have the team week-in and week-out to be competitive and then to put it altogether today."

HOW MUCH DID YOU HAVE TO ADJUST ON THE CAR WITH THE RACE TRACK AFTER ALL THE RAIN WE HAD OVER THE WEEKEND? â€¨“It was a tough call. I didn’t think we would get the race in yesterday evening, but the track really would have been fast yesterday evening. Today, the sun came out kind of like a typical Sunday here in Pocono. We had to have the short run speed. I mean I had a restart that I executed perfectly to get the No. 24 and the No. 88. It is amazing how the team put me in position. I had to do my job to save fuel. Heck, there is still more Sunoco in the tank. Let’s keep going until we run out."

WHAT DOES THIS MEAN TO YOU? â€¨“Well it’s special anytime you win. For Tony Gibson (crew chief) to be out this week because of a lug nut issue we had to overcome a lot. Johnny Klausmeier our interim crew chief, our lead engineer, he stepped up and when you do that it makes you really feel about that team comradery, that team chemistry and that team effort."

HARD RACE TODAY IT LOOKED LIKE YOU HAD IT FOR AWHILE THERE, BUT STILL A REALLY SOLID RUN TODAY:

“Yeah, it was a good run for us. I should have been able to hold that No. 41 (Kurt Busch) off on that final restart. Me and the No. 24 (Chase Elliott) was racing pretty hard and it gave the No. 41 the opportunity to get a run on us. I should have been able to defend that a little bit better. If I could have got in front of him I don’t think he would have got by us. The car wasn’t all we hoped it would be, but it was good. They worked on it and improved it. We were real tight starting the day and we just kept freeing it up. We got it pretty decent at the end, but still not where we want to be. We will work on it and come back and try to do a little better job the next race here."

DESCRIBE HOW THE RACE UNFOLDED FOR YOU HERE THIS AFTERNOON: â€¨“I’m just really proud of the car we had today. What a fast NAPA Chevy and had a car that could compete for the lead all day. There were definitely times we were better than others. I wish once we had taken a couple of those green flags after the cautions we could have got going and ran some laps. That is not how the day unfolded, so we will take it and move on. Just try to be aware of the mistakes I made having a chance there at the end and not getting it done."

WHAT ARE YOU GOING TO LEAVE HERE TODAY WITH THE BIGGEST POSITIVE?

“I don’t know I feel like we had a car that could do it today. I wish I had been just a little more patient behind Dale (Earnhardt, Jr.). I felt like I made a big mistake there in the Tunnel (Turn) and it gave Kurt (Busch) a big run. Biggest thing is just learn and just be really proud that we had a super-fast car, a car that could lead all day and a group of guys that are willing to fight to try to get to Victory Lane."

‘I knew we were going to be close on fuel, so I just started saving a lot and hoping the other guys would run out and we’d have enough to make it to the end. So, I only gave up one spot there to the No. 21 (Ryan Blaney). We would have run 10th if I didn’t save as much. But, I had it in the Top 10 and could have been better than what I thought we’d finish; I think we were 11th and that’s still not bad. We were pretty tight off (Turn) 1 and especially off (Turn 3). So, my runs on the front stretch were terrible. Oh well, we kind of fought that in practice and we made it a little bit better for Turns 1 and 2; but in (Turn) 3 we were still bad.

We’ll go to Michigan next week with a different package."

WHAT DID YOU THINK OF THE RESTARTS WHEN THEY WERE FIVE AND SIX-WIDE SOMETIMES?

“It seemed like every other one would go my way. I’d get a good one and then I’d have a bad restart the next time. So, it’s just kind of how it all worked out. People get checked-up in the middle of (Turn) 1 and you could get runs or whatever. But all-in-all, restarts are always fun here. We probably had a little too many of them, I thought; but it was still good racing."

“The car was really solid today. It was fun to drive. It was good to drive all day long. I enjoyed that side of it. I think we can take something very similar to Michigan next week. To me, it’s a similar race track in a lot of ways and so hopefully that will still work next week as well. But I was really happy with our Farmers Insurance Chevy and the team today. The speeding penalty was just pushing the lights. I was running what I usually run and we might have just been a little aggressive, but we fought back from that."

WHAT HAPPENED? â€¨“Our brakes failed. We knew it was going to happen. We seen the No. 27 (teammate, Paul Menard) happen; we knew it was after Dover. That is the third time. Hopefully, we figure out how to fix it."