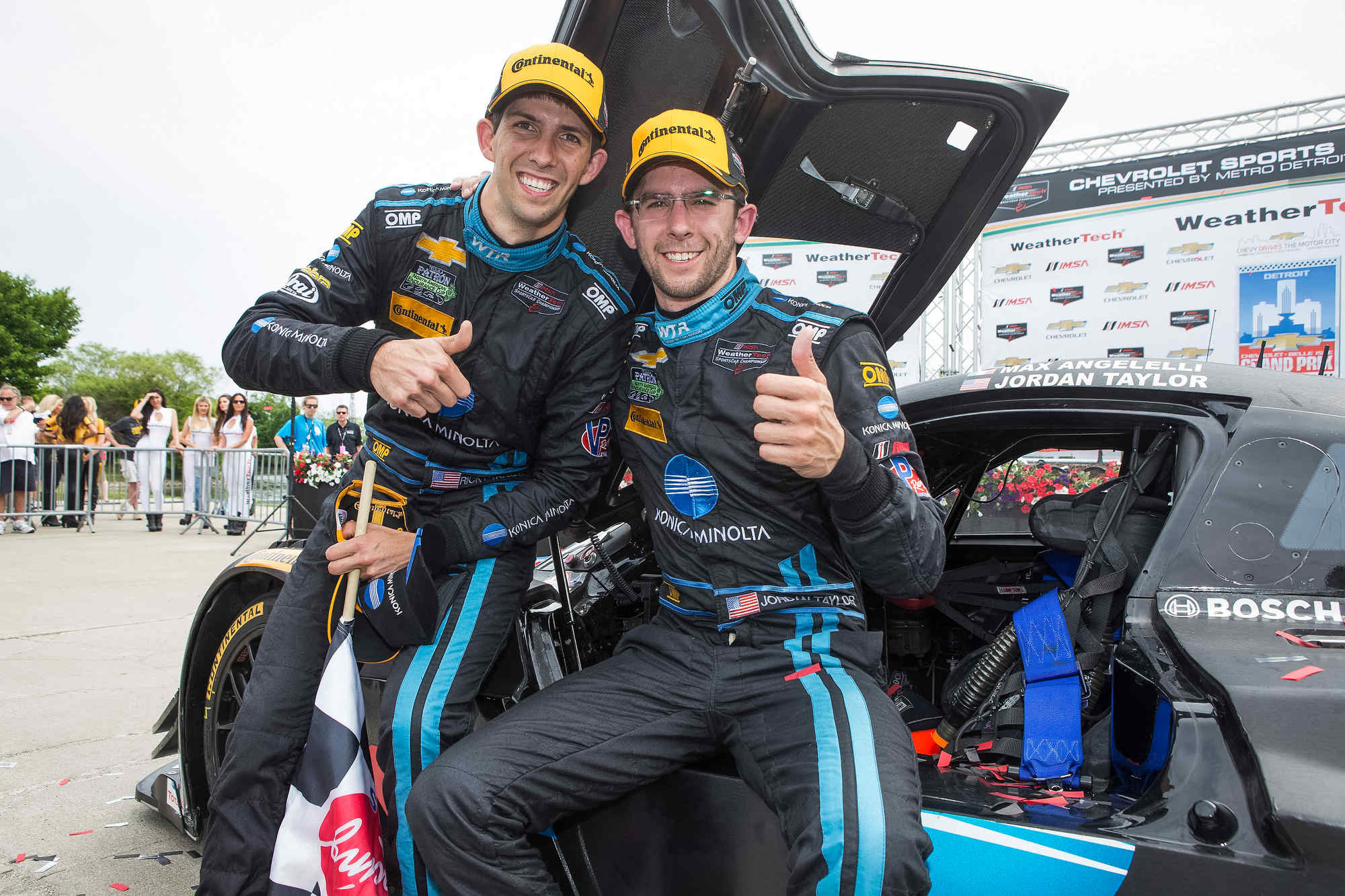 The Chevrolet Sports Car Classic Presented by the Metro Detroit Chevy Dealers could not have gone much better for Motor City fans – the top two Prototype cars were Chevrolet Corvette Daytona Prototypes, the top GT Daytona car was a built-in-Detroit Dodge Viper GT3, and overall places three through six were Prototype Challenge cars, which are all powered by Chevrolet V-8 engines.

Taking the victory was the No. 10 Konica Minolta Wayne Taylor Racing entry driven by brothers Ricky and Jordan Taylor. The team finished a comfortable 1.740 seconds ahead of the polesitting No. 5 Action Express Mustang Sampling Corvette DP of Christian Fittipaldi and Joao Barbosa.

Jordan Taylor said that the key to the win was a restart after a caution flag, where he and Barbosa both had to start behind slower cars. At the green flag Barbosa went to the right, but so did two of the slower cars.

“They blocked him, and I was able to slide around the outside," Jordan said. After that, it was just a matter of defending his position. The Taylor brothers like street courses – their only other win this year was the other street course race, at Long Beach.

[adinserter name="GOOGLE AD"]The No. 10 and the No. 5 are now tied for the championship lead, each with 151 points. The victory was made a little easier by an early crash of the other two Corvette DPs: The No. 31—which came into the race as the points leader – and the No. 90 got together after the No. 90 lost a rear wing, sending it into a tire barrier.

A surprising third overall, and first in class, was the No. 8 Starworks Motorsports ORECA FLM09, which races in the Prototype Challenge class, all using the same chassis and Chevrolet engine. Driver Renger van der Zande had the second shift driving, and his best lap times were only one second behind the Taylor brothers. Van der Zande shared the PC victory with co-driver Alex Popow.

Van der Zande said that he likes the Detroit track, despite its bumps and tight turns. “I’m very comfortable pushing it here on this track."

You have to go all the way down to seventh overall to find the third-place Prototype: The No. 55 Mazda of Tristan Nunez and Jonathan Bomarito. One bright spot: Getting a third-place finish in the Prototype class gives Mazda its first Prototype podium finish in the WeatherTech Championship.

In GT Daytona, the No. 33 ViperExchange.com/Gas Monkey Garage Dodge Viper GT3-R couldn’t have picked a better race for the team’s first win of the season. The Viper, said driver and team owner Ben Keating, is the only U.S. car in the class, “and it’s really a big deal for us to win in Detroit."

Co-driver Jeroen Bleekemolen drove the second stint, after smart pit strategy got them out front. On a tight, rough road course like Detroit, “The smallest mistake can take you out of the race," he said.

Second in GT Daytona was Joerg Bergmeister and Patrick Lindsey in the No. 73 Park Place/Justice Brothers Porsche 911 GT3 R, 1.359 seconds behind the Viper. Third was the No. 63 Scuderia Corsa Ferrari 488 GT3 of Christina Nielsen and Alessandro Balzan.

Interestingly, Keating said that drivers from all three GT Daytona cars that finished on the podium would be flying to Le Mans for testing the afternoon of the IMSA race here, arriving in Le Mans and 6 a.m. Other drivers, such as the Taylor Brothers, would be heading over on a commercial flight, arriving a little later.

Next up in the IMSA WeatherTech SportsCar Championship: Sahlen’s Six Hours at the Glen, a six-hour endurance race at the newly repaved Watkins Glen International circuit. It’s scheduled for June 30-July 3.

RICKY TAYLOR, WAYNE TAYLOR RACING NO. 10 KONICA MINOLTA CORVETTE DP – RACE WINNER: “We weren’t the fastest car for sure. I think the 5 and the 31 were stronger than us on speed. But we woke up this morning, and we said these are the kinds of races that we win sometimes; when you are not fastest and sometimes it comes together and you win the race somehow. I think the move of the race was definitely Jordan on that restart. We had one opportunity to overtake, obviously from second to first, and he made great work through the traffic on the restart and controlled the race from there. It’s a really good day for Chevrolet with a 1-2 finish."

JORDAN TAYLOR, WAYNE TAYLOR RACING NO. 10 KONICA MINOLTA CORVETTE DP – RACE WINNER: “It was kind of odd how we restarted in the middle of the pack. The first class leader was picked up by the pace car which wasn’t Prototype, so we were behind the GTD and P cars. I was behind (Joao) Barbosa, and the track went green and going through the kink I saw he wanted to go to the inside the PC cars. Both of them went to block each other so he got pinned in and I just kind of sailed around the outside on a clean line. I was able to get through a couple of GTD cars quicker than he did. From there I was just trying to manage the gap. They were definitely fast but I think in traffic we could definitely manage that better and I could pull away here and there."