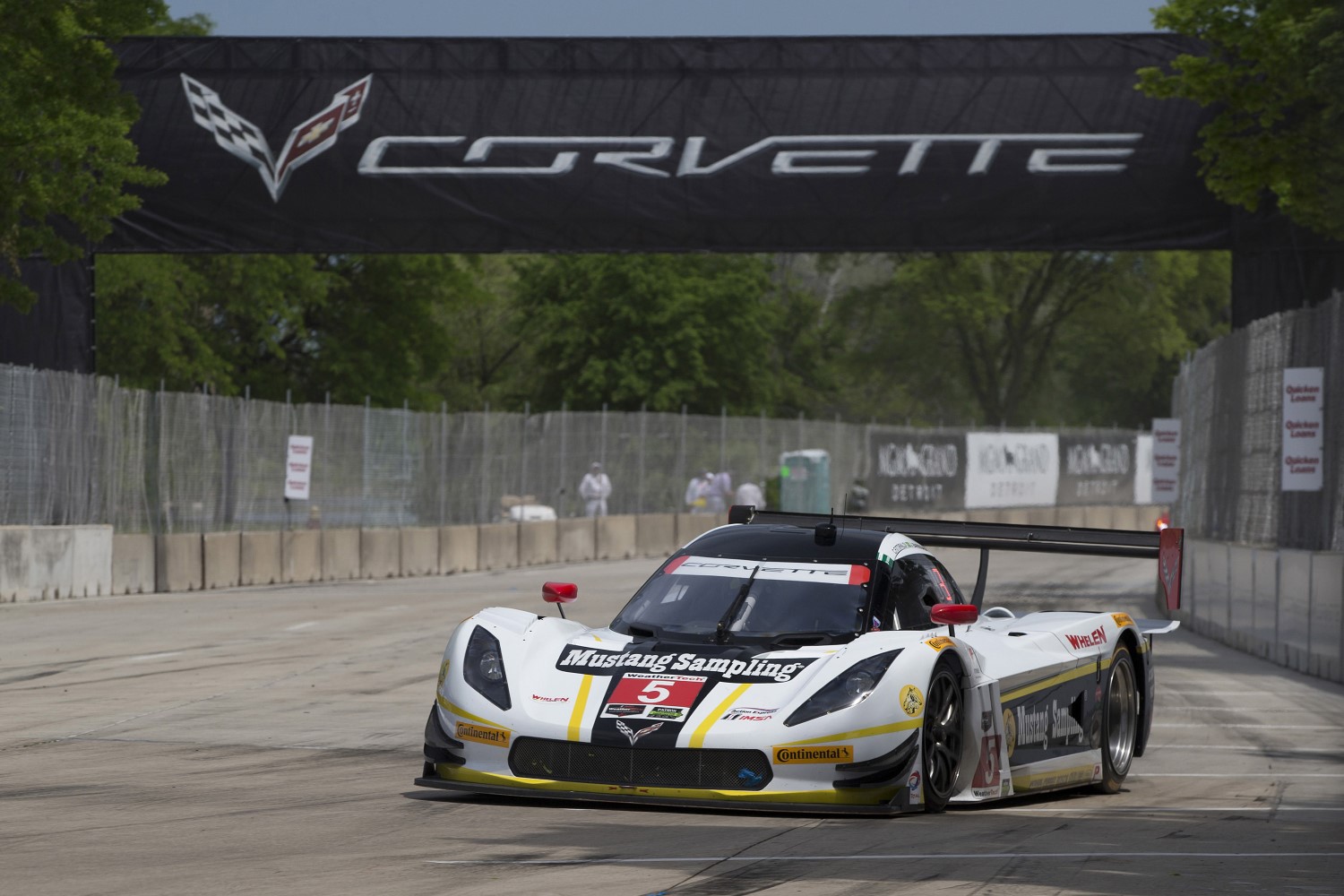 DETROIT – How hard was Christian Fittipaldi trying to set the fastest time in the Prototype class for the Chevrolet Sports Car Classic Presented by Metro Detroit Chevy Dealers? He spun his No. 5 Action Express Mustang Sampling Chevrolet Corvette DP trying to squeeze one more hundredth of a second from his car.

Fortunately, it wasn’t necessary – Fittipaldi set the fast lap of 1 minute, 23.815 seconds a couple of laps earlier, and that time held up, giving him and his teammate, Joao Barbosa, their second IMSA WeatherTech SportsCar Championship pole of the year on a road course, the first being the even tighter Long Beach Grand Prix.

“We have a good car on street courses and road courses," Fittipaldi said. “I’m really happy being on the pole."

Tighter, but probably not quite as challenging, given some bumps in the 2.3-mile Detroit Belle Isle street circuit, located within sight of downtown Detroit. Fittipaldi’s lap was .048 seconds quicker than Marc Goossens in the No. 90 Visit Florida Racing Corvette DP he shares with Ryan Dalziel.

Four Corvette DPs took the top four positions. Fifth was the No. 60 Shank Racing Honda Ligier JS P2 shared by regular driver Ozz Negri and Katherine Legge, who usually drives the DeltaWing Prototype, which isn’t at Detroit. Legge qualified the car with a respectable time, though she’d never been in it. Negri’s regular co-drive, John Pew, is in Le Mans, France, preparing for the team’s effort in the 24 Hours of Le Mans later this month.

Before we expect to see Fittipaldi and Barbosa start the No. 5 on the pole in tomorrow’s race, though, the team will have a decision to make: The team has to start the race on the tires it used for qualifying, and if Fittipaldi flat-spotted the tires during his spin, they will likely change tires, and that will have them starting from the rear of the Prototype category.

In Prototype Challenge, Robert Alon scored his second straight pole in the No. 52 PR1/Mathiasen Chevrolet-powered ORECA FLM09 that he co-drives with Tom Kimber-Smith with a lap of 1:27.571. He edged out the No. 38 Performance Tech car of James French and co-driver Kyle Marcelli, with the No. 8 Starworks entry of Alex Popow and Renger van der Zande in third.

“We have our work cut out for us," Alon said. “I have to put my head down and turn the car over to Tom in one piece, that’s the minimum."

The biggest class to qualify was the GT Daytona cars, with Bryan Sellers topping the 13 entries with a lap of 1:31.340. Sellers grazed the wall at least once in the No. 48 Castrol Paul Miller Racing Lamborghini HuracÃ¡n GT3, but held on to give Lamborghini its first pole since it joined the WeatherTech Championship this season. Paul Miller Racing won the pole here last year, but in an Audi R8.

“This track ranks very high on the difficulty level," said Sellers, who has never raced at Detroit. “There’s something here that makes it extremely difficult – the bumps, and how busy the track is."

Sellers is especially happy to be the one to give Lamborghini its first pole. “Lamborghini has a huge vested interest in the American market and the WeatherTech (Championship)," Sellers says.

Second was the No. 73 Park Place Porsche 911 GT3 R of Patrick Lindsey and Joerg Bergmeister, followed by the No. 6 Stevenson Motorsports Audi R8 LMS GT3 of Robin Liddell and Andrew Davis.

CHRISTIAN FITTIPALDI, ACTION EXPRESS RACING NO. 5 MUSTANG SAMPLING CORVETTE DP – POLE-WINNER: “It was pretty interesting today. We had some mechanical problems in the last session. But it’s part of the sport. Sometimes you have perfect days and sometimes you have other days that are not so perfect. Obviously hats off to the boys at Action Express for all the effort they put into the program. I’m happy for Chevy and Mustang Sampling. Let’s try to capitalize on the pole position, and I’m happy we swept both pole position on street tracks this year."

HOW HARD WERE YOU PUSHING ON THAT LAST LAP? “I was pushing a lot. Ian (Sailors, engineer) had told me the 90 car got pretty close. At that point, my tires were pretty much past their useful life. I knew that if I did a perfect lap I could have gone quicker, but I also knew it was extremely difficult. Unfortunately when I got to the Fountain Turn I lost it. But God was looking after us and we didn’t hit a wall. We’ll clean the car up and see what we can do tomorrow."

MARC GOOSSENS, VISIT FLORIDA RACING NO. 90 VISITFLORIDA.COM CORVETTE DP – QUALIFIED SECOND: “Since we got here when we did the track walk yesterday, I seemed to like this place but you never know what it’s like until you go out in the race car. Obviously we were moving around a little bit in the first session to study the track and then compare data with Ryan (Dalziel). That’s the advantage of having a teammate like him. I adapted to the track pretty quickly but in the meantime we kept working on the car. It’s not too bad. It’s pretty good for race conditions but I didn’t think we we were going to be this close for qualifying. I was hoping to be on the front row; if not then third. This is rewarding for the whole team and hopefully it motivates everybody to take us to the next level because they definitely deserve it. We’re on the right track; we have to keep pushing everyone together."

RICKY TAYLOR, WAYNE TAYLOR RACING NO. 10 KONICA MINOLTA CORVETTE DP – QUALIFIED THIRD: “We tried lots of stuff in practice today to make the car better and we weren’t too far off, but then we threw a bunch of big things at it before qualifying. I think we might have gone a bit too far with it because it was definitely a handful. But the good thing is, we definitely have a good idea about what we have to do for the warmup tomorrow morning and then in the race. The qualifying session showed us the direction we now need to go in. We’ll combine our two cars (setups) from today and ideally we’ll end up with a great car for the race."