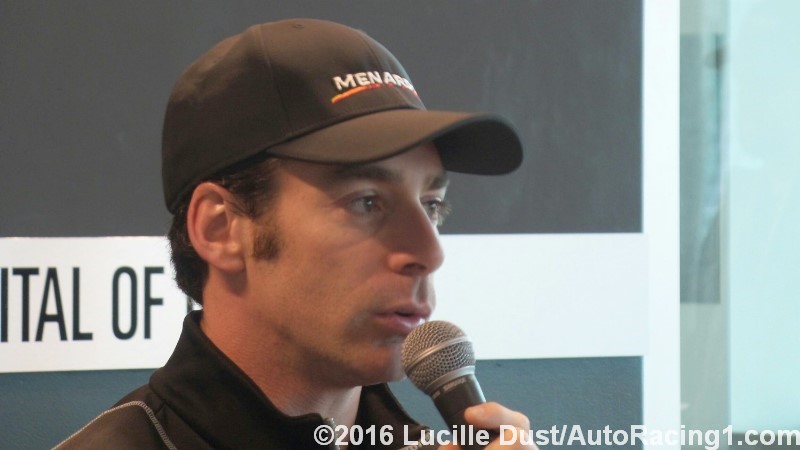 DID YOU HAVE THE RACE ENGINE IN AT ALL LAST WEEK? “No, no. We just had the race engine in for Monday. Chevrolet made a hell of a step. It’s exciting. It’s exciting to leave the pits and know you have some power.

HOW WAS YOUR CAR MONDAY? “Eighty percent of the practice was awful. The last 20 percent was good. I went out after we had put new tires on and I didn’t like what we did. We had a red flag so we came back in and went back out after a change. I ran about 12-15 laps in a row without saying a word on the radio. I think that’s a good indication on how much I bitch on the radio!"

THREE RACES HERE AT THE SPEEDWAY FOR YOU WITH TWO WINS AND A FIFTH. HOW DOES THAT HAPPEN?

“Beginner’s luck! I think the first 10 times you come here you’re a rookie? Is that it? So I have a quite a few more to go."

[adinserter name="GOOGLE AD"]WILL SAID AFTER LAST YEAR’S RACE THAT HE WOULD LOOK BACK, HE’LL THINK IT WAS A LOT OF FUN. DID YOU EVER HAVE THAT CONVERSATION? “It was a good race. Yeah, he said he was disappointed but also said it was his best race. He said he learned a lot. We have really good teammates and really smart drivers. We all learn from each other and bring it to the next level. It’s going to be fun."

ARE THE CARS AS HARD TO DRIVE AS THEY HAVE BEEN? SCOTT DIXON SAID THIS COULD BE THE HARDEST 500 TO WIN? “It’s a different type of hard. The cars are really hard to drive but we’re all bunched up. The timing of the passes will be key. There will be a lot like always. You have to have a lot of luck and things to go your way. You’re going to make a move. It might be the right move, it may be the wrong move. How do you know?"

DOES THIS CARRYOVER THOUGH? “It’s great for the series. Fans are going to love this and it will help the series. We have to execute, do our jobs and see what happens."

DO YOU HAVE THE SAME FEELING THIS YEAR ABOUT YOUR CAR AS LAST YEAR? “Last year was easier because the cars were easier to drive. My car last year was really, really good. They are a little harder this year. I can still pass and make things happen. It’s not as easy but I haven’t talked to anyone who has said it is easy."

How do you prepare mentally for this?

HELIO CASTRONEVES: Same as the others. It’s a big race but you don’t think about it differently in terms of being a different race It’s 500 miles. You have double the pit stops than a short race, and those are the things that become important.

When you came here the first few years you were really amped up. How do you feel about it now?

HELIO CASTRONEVES: I still do. This place, even when we tested, is special. I have to say the community helps it become what it is, and that’s why it is what it is.

500 miles feels like a marathon. Can you explain what it does with your body and your mind?

HELIO CASTRONEVES: With the body, it’s dehydration, especially with conditions that are expected Sunday. With the mind, it’s tough because sometimes you face conditions that you didn’t face in practice. And if something happens big, you might not have the chance to come back. So you have to be aggressive but careful as well so you don’t throw it away in one corner. After the race, you’re exhausted, especially mentally.

This would be the most appropriate to get your fourth win?

HELIO CASTRONEVES: Definitely for the record books it would be fantastic to be the winner of the 100th running. It would be very special.

[adinserter name="GOOGLE AD"]What would it mean to Roger Penske to win the 100th running?

HELIO CASTRONEVES: Team Penske is like family and no question it would be my ultimate goal to give Roger the 100th, and with that on his 50th anniversary. It would be my fourth, but it would mean more to see Roger happy coming from me.

What is it about him that brings success here?

HELIO CASTRONEVES: Leadership. He is a leader that makes all the people who work around him to believe. When you see your leader happy, that’s the best reward you can have.

What do you remember about racing here the first time?

HELIO CASTRONEVES: I remember on race day all the people. It was like going to a rock concert and you were waiting for that moment to start. The only difference is I was part of the show. And every time I go on the track on race day it feels the same.

WHAT DID YOU LEARN LAST YEAR IN THE RACE? “I learned where to be on the last lap. Juan (Pablo Montoya) had more downforce than me and that was the key right there. Maybe I should have asked for more front wing on the final pit stop. And he’s very smart the way he races. He’s very good about taking away your line and your line.

LAST YEAR, SECOND WAS THE PLACE YOU THOUGHT YOU WANTED TO BE ON THE LAST LAP. “Absolutely. I was sitting there thinking this is the best spot. That I would pass him on the backstraight just like I’d done all day. I kind of lifted but still had a shot. If I could have been flat in (Turn) 3, it would have been a lot closer to him at the line because he lifted in Turn 3, too. It’s frustrating."

THE CARS THIS YEAR, YOU’VE SAID, ARE STILL RUNNING CLOSE, BUT WILL THERE BE ALL THIS GREAT PASSING WE’VE SEEN IN THE LAST FEW YEARS? “You will; at the front. I don’t think anyone will ever get away. At the end of the race there will be constant swapping positions."

HOW DO YOU FEEL ABOUT YOUR CHANCES THIS TIME? “Last year I think the Chevys had an advantage on Honda, and I think Penske and Ganassi had an advantage on the field. This year Honda was strong in qualifying. I think we still have a way to go once Chevy puts the race engine in the car. I felt good in the race car all month. I feel better, honestly, than even last year. I feel my setup is right there in the window. This has felt like the most low-key month I’ve had. I really haven’t thought about that it’s the 100th. The only thing I’ve thought about is getting the car right in practice sessions. It is another race and you have to attack it like that."

WHAT DOES THE INDY 500 MEAN TO YOU? “It means everything. All the work you do as a driver since you were a kid comes to this. If I were to win this race, it would complete my career. Not saying that I wouldn’t want to do it again – I would. But from that point on, it would be a lot easier because the dream has been accomplished. You can focus on doing it over and over again."

IS THERE PRESSURE COMING IN WITH THE POINTS LEAD? “I believe it makes it easier on me. Even if I finish last in the race, I still will lead the championship. I take this race like a one-off. If I’m second in the last corner, I’m going to go for it. It’s such a big race and I’ll do everything I can do win it."

WHAT DO YOU NEED TO WIN THIS RACE? “For us, we’re going to need heat. I’d like it to be really hot and I think that would make my car better. You need to be really calm and composed – very focused on the job. You need good pit stops and consistency. You really need to be strong in the last 30 laps."

HOW DO YOU TRANSLATE THE MOMENTUM YOU HAVE COMING INTO THIS RACE? “It’s good momentum for our team. This has been a confidence-builder. I know coming into the pits that I can rely on them. Personally I don’t feel like there’s a reason we shouldn’t be contending for the win."

HAS THIS WEEK BEEN LONGER THAN USUAL? “It’s been good. Last week was a lot of running and testing. It was tiring at times. It’s been tough to keep track of all the changes we’ve made on the car and with the weather changing. It’s been interesting to evolve the car toward the race. There hasn’t been as much track time this week. But that’s what the Indy 500 is about – the hype before it."

YOU SPEND A LOT OF TIME AROUND HELIO (CASTRONEVES). ARE YOU SURPRISED AT HOW MUCH DRIVE HE HAS AFTER WINNING THIS THREE TIMES? “He’s been around for a long time but still behaves like a 22-year-old! It’s very inspiring and I love being around him. He never has a bad day. Even when he’s having a bad day on track, he finds a way to turn it around. He’s got that something special for sure. His spirit makes it so he doesn’t give up."

[adinserter name="GOOGLE AD"]YOU SAID GOING INTO THE SEASON TO WATCH OUT FOR THIS TEAM AND THAT WE HAD THINGS WORKED OUT. “Everyone is doing a tremendous job. There have been no flaws so far in the 22 team so far. It’s not just the driving. It’s everyone changing the wheels on the pitstops, the fueling, the strategy and setting up the car. We had such a tough year last year because we didn’t have results. But that didn’t mean we didn’t have performance. Now we have performance and results."

YOU WERE THE FASTEST CAR LAST YEAR IN MOST OF THE RACE. WHAT DID YOU LEARN DURING THE SECOND HALF OF THE 500 THAT YOU CAN USE TO YOUR ADVANTAGE? “Well I learned not to hit my front wing on anything! You have to be a bit more careful passing something. But I also learned when it’s time to go and when to take risks, and when not to. That’s race craft. That’s what Scott Dixon, Tony Kanaan and Helio do so well."