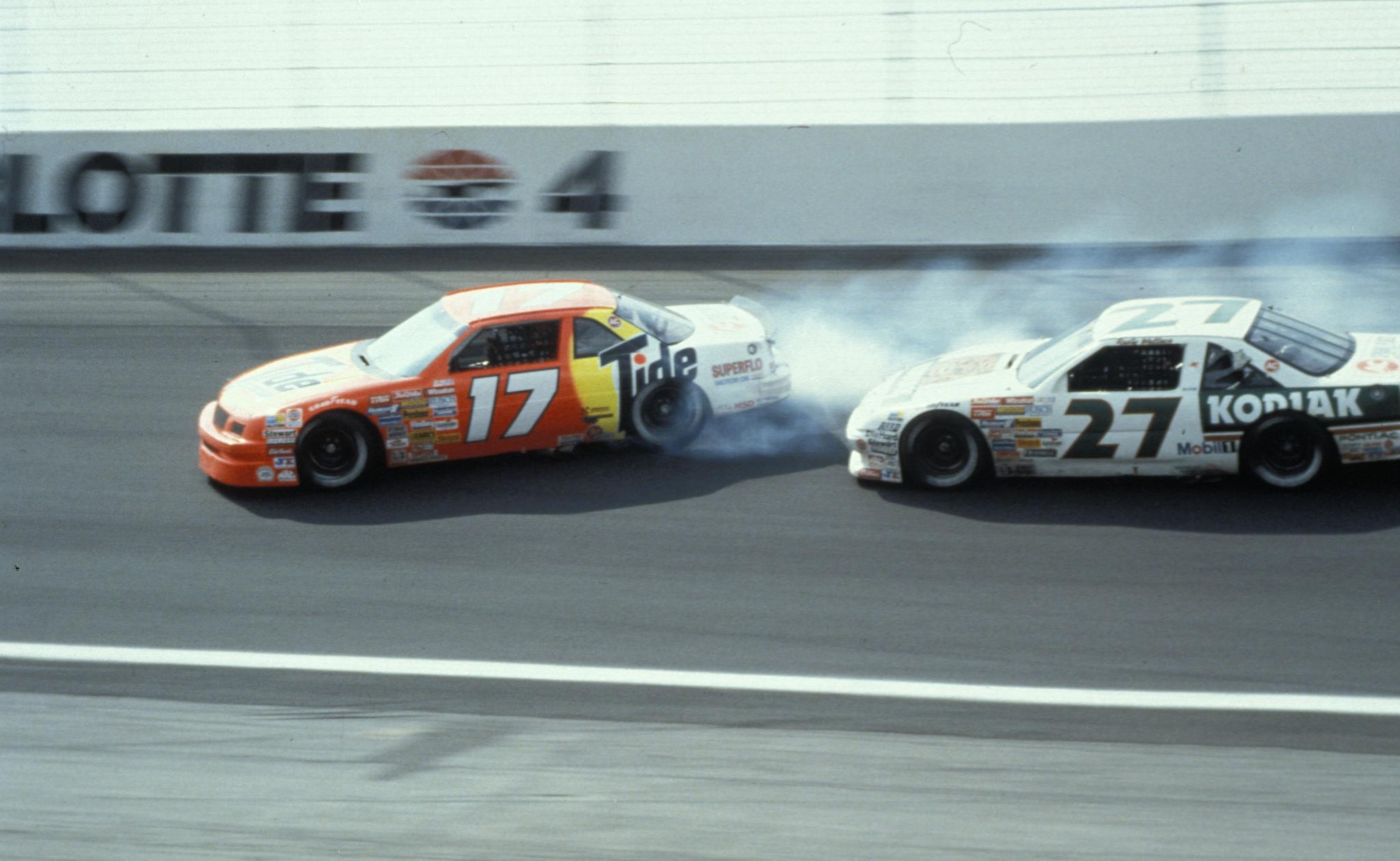 More than any other race besides the Daytona 500, perhaps no other event in NASCAR carries as much prestige to the winner as the NASCAR All Star Race. The chance to prove yourself again the best of the best, and beat them, has been the one of the spoils that comes along with winning the event. That, and a nice fat paycheck waiting for you in Victory Lane.

For that reason, drivers seem more intent on doing anything, and everything to win – even if that means knocking the hell out of someone who is standing in your way.

Darrell Waltrip and Rusty Wallace reached that crossroads in the 1989 edition of the All Star Race, then known as "The Winston", one of the most controversial finishes in the history of the all-star event.

A finish forever immortalized as "The Tide Slide".

By 1989 the All Star Race had become one of the premiere races on the circuit, and a Holy Grail for drivers who wished to add their name to the hallowed list of winners. It was no longer just a one-off exhibition race, The Winston was now seen as a must-have win for drivers during their career.

The fact that it came with a winner-take-all $200,000 payday was more than enough incentive.

[adinserter name="GOOGLE AD"] After the infamous "Pass In The Grass" two years earlier, bumping and shoving your way to the front was now the norm, and not to be outdone by the 1987 race, the fifth-annual running of The Winston on May 21, 1989 featured plenty of bumping and shoving – on, and OFF, the track.

The 1989 Winston Cup season had already been a contentious one between Waltrip and Wallace, as the two had combined to win six of the first nine races of the season and were running second and fifth in points respectively behind Dale Earnhardt. Waltrip in particular was riding his own personal high streak, having won the season-opening Daytona 500 for the first time ever.

Wallace, on the other hand, was in a slump, having fallen from second in points after a DNF a month earlier at Martinsville.

Waltrip, too, had a reputation as one of the biggest egos on the sport, never afraid to speak his mind, Waltrip had acquired the nickname "Jaws" for his uncanny ability to let his mouth get him in trouble. By his own admission, he was selfish, inconsiderate, and obsessed with winning. He was disliked by his fellow competitors, and vilified by the fans

Wallace, by comparison, was the babyface. A young, clean-cut. Talented driver who was thought to be the future of NASCAR.

1989 edition of the race introduced a new qualifying format – a three lap time trial, with a mandatory two-tire pit stop in the middle. The driver????????s qualifying time would be the total of the three laps and the pit stop.

Terry Labonte took the pole for the event with Wallace and Waltrip qualifying third and seventh, respectively.

Wallace wasted little time getting to the front in the opening 75-lap segment, taking the lead on lap nine following the first caution flag. Waltrip managed to fight his way to Wallace????????s bumper in the closing laps, but finished second to Wallace in the opening segment.

Wallace started on the pole for the second 50-lap segment and led the first three laps before Waltrip blew by on the outside on the backstretch and into the lead, quickly pulling away to more than a straightaway lead en route to a victory in the second segment. Wallace finished second, setting the stage for the final 10-lap shootout.

The final 10 laps was a replay of the second segment, with Wallace chasing Waltrip, keeping within a few cars lengths. As the race came down to the last five laps, Wallace looked inside of Waltrip????????s line in every turn, by each time Waltrip was able to power away.

With two laps to go, Waltrip was ahead by less than a car-length. As the two came through turn four to get the white flag, Wallace wedged the nose of his no. 27 Kodiak Pontiac right up against the left-rear fender of Waltrip????????s no. 17 Tide Chevrolet and turned him, sending Waltrip spinning through the infield grass.

The yellow flag came out, and Wallace would hold the lead through the restart to beat Ken Schrader to the finish for his first -and only – All Star Race victory and a $200,000 payday.

Waltrip would finish seventh, but the fireworks were just beginning.

As Wallace drove his car through the infield toward Victory Lane, one of Waltrip????????s Tide crewmembers tried to block his path, leading Wallace????????s crew member Todd Parrott, running alongside the left rear of Wallace????????s Pontiac, to lay his shoulder into him, touching off a bench-clearing brawl between the two teams.

After the race, when asked if he considered what he did "good clean racing", Wallace responded "I consider this The Winston".

"Darrell was driving hard, I was driving hard – I got up underneath him coming off turn four, we just got together," Wallace said after the race. "He came down, I held my groove and we both just touched – that????????s all there was to it.

"I could never walk through this garage area having done that to someone, but some people can, so more power to them I guess."

The incident on the track – and the fisticuffs that followed – have been replayed countless times in highlight reels and televisions specials, and have been forever enshrined in the NASCAR Hall of Fame. The moment also had a lasting effect of both drivers, with Waltrip surging in popularity while Wallace became the new villain in the eyes of the fans.

During driver introductions at the Coca Cola 600 the following week, Waltrip came out to a cheering crowd, while Wallace was showered with boos.

Waltrip would win the battle, taking the checkered flag in the 600 for his 77th-career win, but Wallace would ultimately win the war – beating out Dale Earnhardt by 12 points at the end of the season to win his only Winston Cup title.