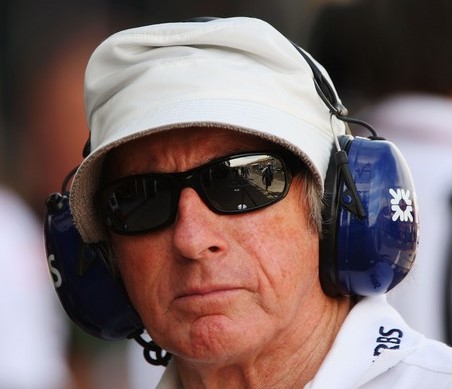 Hamilton slowed his Silver Arrow down on purpose while he was in the lead to increase the chance of his team-mate Nico Rosberg being overtaken. The tactic proved fruitless as the German went onto win the Drivers' Championship after he held P2 through to the end.

Adding to the backlash Hamilton received for his tactics, Stewart said Mercedes should definitely punish his British compatriot.

"I think he (Hamilton) can be a little ballerina," Stewart told the Press Association.

"Toto Wolff and Niki Lauda are not stupid people, and neither is the Mercedes chairman who often comes to grands prix.

"You cannot threaten a multi-national corporation of that size by one man who is just not doing it the right way."

Stewart believes that Hamilton is contractually obliged to follow team orders and added that Mercedes need to make an example out of him.

"Now, I am sorry, but when you are paid between 20 and 30 million pounds a year and you are told to do something you have got to do it. I don't care who you are," he explained.

"It is not the first time he has gone against instructions, and if he is going to continue to do that they have the choice of dropping him.

"He only does 21 races a year. It is no big deal. We worked our a*** off to make decent money, and they don't even do much testing now.

"Mercedes may just give him another heavy warning, but if they do that they would then have to say ‘this is what is going to happen the next time you disobey orders'. Another way would be to penalize him financially."

11/30/16 Mercedes has played down reports that Lewis Hamilton is refusing to get back to work this week.

In Abu Dhabi, it had been agreed that whichever Mercedes driver won the title would head to a Petronas event in Malaysia on Monday.

And the other would stay in Abu Dhabi to drive Mercedes' modified 2015 test car for the Pirelli tire test.

Red Bull's Max Verstappen told Algemeen Dagblad newspaper that he was actually looking forward to trying the 2017 slicks for the first time.

"For me, the tires are new so I'm curious," said the Dutchman.

But the German newspaper Bild claims that Hamilton, who is reportedly facing sanctions by Mercedes by refusing team orders on Sunday, is now refusing to test on Tuesday.

A team spokesman is quoted by Germany's Sport1: "That is not correct."

It is clear at least that some tension has crept into the Mercedes-Hamilton relationship, with boss Toto Wolff bristling that Hamilton found an ally for his tactics on Sunday in the form of Red Bull's Christian Horner.

"Maybe he (Hamilton) should drive for him (Horner)," Wolff said on Sunday, not just to British television Sky but also separately to the Channel 4 broadcaster.

A rumor even swirled in the Abu Dhabi paddock that Hamilton had threatened to quit the team altogether following his collision with Rosberg in Spain.

"That's all private stuff," Hamilton said, refusing to deny it.

"It's all in the past so it doesn't really matter."

Hamilton is being criticized, and Mercedes is reportedly considering sanctioning the Briton, after he deliberately backed Rosberg into chasing rivals on Sunday.

Rosberg told BBC radio on Tuesday that he can "understand" why the team is upset.

"But at the same time, it's easy to understand his perspective," said the German. "It's about the world championship so you can understand that he wanted to try whatever it was possible to do.

"We can just drop the whole discussion. There's no point discussing this topic any more. It's done and it's in the past," Rosberg insisted.

11/29/16 Mercedes F1 driver Lewis Hamilton was "unrepentant" after he defied his team by "trying to wreck the world championship hopes of Nico Rosberg at the Abu Dhabi Grand Prix," according to Kevin Eason of the LONDON TIMES.

Mercedes Motorsport Dir Toto Wolff accused Hamilton of "anarchy" as his driver "tore up the company rulebook and adopted a ruthless tactic" to back Rosberg up into the pursuing cars of Sebastian Vettel and Max Verstappen. The team will hold an inquiry into "why Hamilton took the lone decision to risk victory and a championship by allowing Vettel and Verstappen to get close enough to challenge."
Hamilton risks punishment "as great as a suspension." The Briton won the grand prix but Rosberg "held on to second place for his maiden world championship."
Despite warnings before the race, Hamilton "decided to go his own way as he set off on the first of the 55 laps."
Wolff: "It is very simple: anarchy does not work in any team and in any company."
Hamilton "bristled when accused of dirty tactics." He said, "We are fighting for a championship, I was in the lead, I control the pace — that’s the rules."
However, Hamilton was "slapped down by third-placed Vettel," who said, "Nico won the championship today. He's a deserving champion. This is Nico’s day and it is a sign of respect and greatness to give him that. I think we owe it to him." London Times
In London, Jonathan McEvoy reported Hamilton risks having his Â£30M ($37.2M) Mercedes contract ripped up.
Hamilton slowed down at the front, "hoping second-placed Rosberg would come under pressure from drivers behind."
Asked if Hamilton could be suspended, Wolff said, "Everything is possible."
Vettel said, "It was tricky at the end because Lewis played some dirty tricks."
The ploy "infuriated Mercedes during the race, prompting them to issue two clear instructions to Hamilton to increase his pace."
The highest Mercedes authority is Technical Dir Paddy Lowe. But when he told Hamilton "to put his foot down," Hamilton retorted that he was "comfortable" doing what he was doing.
He was supported by Red Bull Team Principal Christian Horner, who said, "I wouldn't have expected him to do anything different. He played completely within the rules." Daily Mail

Nico Rosberg duly won the world championship by finishing second to his British teammate, but the German said he endured a "horrible" race at Yas Marina.

That was mainly due to the closing laps, when Hamilton ignored Mercedes' instructions for him to speed up, as the Briton backed Rosberg into the chasing Sebastian Vettel and Max Verstappen.

Hamilton had earlier ruled out backing up his teammate, and Rosberg admitted afterwards that he was surprised by the sister silver car's tactics.

"I didn't expect it but maybe I was naive," he said.

Otherwise, Rosberg did not want to comment on the episode, but Ferrari's Vettel said the "tricks" played by Hamilton were "not very fair".

Not just that, Hamilton's driving had also been strictly forbidden by Mercedes, not just beforehand in meetings but conveyed to the Briton via radio as "instructions" during the race.

The British newspaper The Daily Express says Hamilton "could be sacked", while the Times said the triple world champion "faces (a) team ban" for his behavior.

Team boss Toto Wolff confirmed: "Anarchy does not work in any team and in any company. Everything is possible."

Hamilton, however, denied being "unfair", and he was even supported by Red Bull team boss Christian Horner.

But Mercedes' team chairman, the F1 legend Niki Lauda, said: "As drivers we always try every trick in the book, but you always must have respect for your teammate."

However, some backed Hamilton's tactics, including Kimi Raikkonen who said the Briton's behavior was "not ridiculous" in Abu Dhabi.

And Carlos Sainz added: "I would have done it too. If you want to win the title you have to try everything, as long as it's within the rules."

But there is also controversy about Hamilton's ongoing comments questioning the legitimacy of Rosberg's title, including the claim that he lost many points through unreliability.

"This is a mechanical sport," Wolff insisted. "You need to win and to lose with dignity.

"I think it's a pity we are talking about this," he added. "Nico Rosberg has won the world championship after a terrific season."