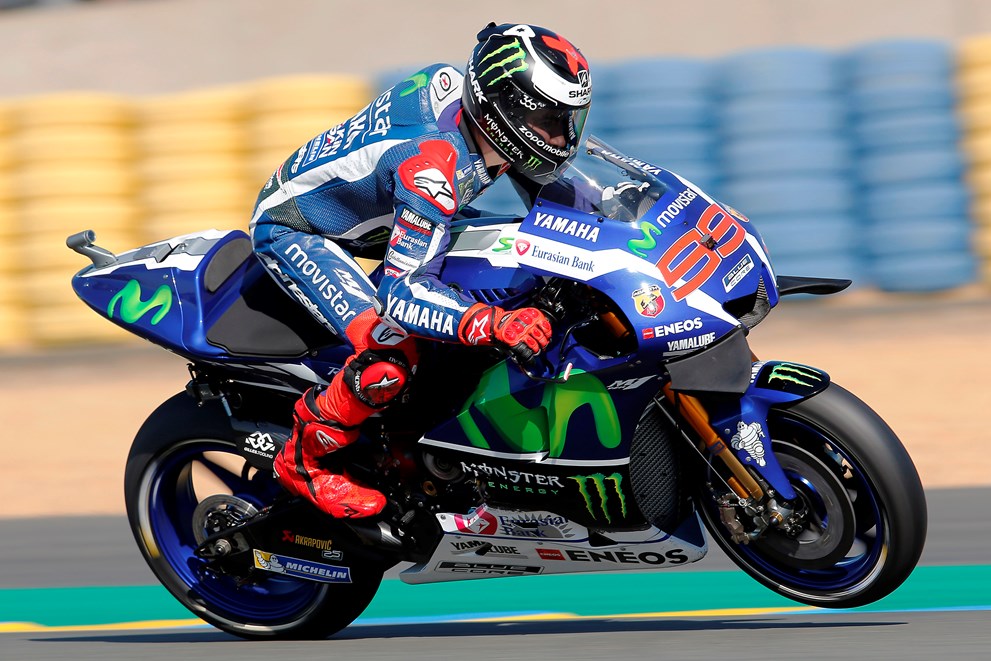 The atmosphere in Le Mans was tense as the MotoGP World Championship headed out of the pits, the packed stands cheering as the riders filtered out. Jorge Lorenzo (Movistar Yamaha MotoGP) was immediately on the pace, his first flying lap already the fastest time of the weekend.

Dani Pedrosa (Repsol Honda Team) suffered an early crash at Turn 4 with just over eight minutes of the session remaining. He was unable to remount and quickly got back to the pits for his second machine. Fortunately for Pedrosa his experienced team were immediately ready with his second bike.

As the final runs of the day began, Andrea Iannone (Ducati Team) fell while on his out lap. The Italian immediately sprinted back to the pits and jumped onto his second Desmosedici GP, not even waiting to catch his breath.

Meanwhile Jorge Lorenzo improved his time, setting the first ever 1’31 around Le Mans with a 1’31.975 and giving Michelin their first record since returning to the World Championship. This is also Lorenzo’s first ever premier class pole position in Le Mans.

Marc Marquez (Repsol Honda Team) will start second, his fifth front row start of the season. His 1’32.416 was 0.441s back on Lorenzo’s time, the Yamaha having a decent advantage over a single flying lap but Lorenzo himself admitted it won't be the pace for the race.

[adinserter name="GOOGLE AD"]Even with the fall, Andrea Iannone (Ducati Team) was able to lock down third on the grid. His 1’32.469 came from his third lap of the session, unable to improve after his crash.

Pol Espargaro (Monster Yamaha Tech 3) will start Sunday’s French GP in fourth and as the leading Independent Team rider. Behind the Spaniard will be Andrea Dovizioso (Ducati Team) as Ducati were once again the only factory team with two bikes inside the top five.

Bradley Smith (Monster Yamaha Tech 3) achieved his best Qualifying result of the year with sixth while Valentino Rossi (Movistar Yamaha MotoGP) ended seventh. This is his worst grid position since Rossi started last in Valencia and his first time starting on the third row since the Australian GP in 2015.

Due to his crash, Pedrosa will start the French GP down in 11th after a promising start to the weekend when he topped Free Practice 1.

Home rider Loris Baz (Avintia Racing) had a difficult day, struggling in Q1 and subsequently starting last on the grid for his home round.

Jorge Lorenzo
"From the beginning, the first practice on Friday, everything went very well already with our first setting. Little by little and practice by practice together with the whole team we improved small details in all the corners to create a bike that allowed me to keep a constant pace. I was using the same old tires throughout free practice 4 and normally that means that when you use new tires you can be very fast and that's what happened today. I didn't expect to set such an unbelievable lap time, but sometimes the lap time surprises you and I'm very happy with the pole position and the lap record and especially with the work we did with the whole team on the bike."

Marc Marquez
“I was able to set a good lap today, but it wasn’t perfect. At first with the new tire I found it hard to get the same feeling I had with used tires and the bike moved about a lot when I tried to push more. At the end I changed my riding style a little and set two pretty good laps that helped me to fulfil my main objective, which was to get on the front row. I think the pace that I have isn’t bad, and in the last free practice I felt comfortable, although I’m still not quite as fast as Jorge [Lorenzo]. We’ll see what weather we have tomorrow and what the track temperature is for the race, and try to manage things as best we can."

*Gap with the fastest rider in the Q1 session