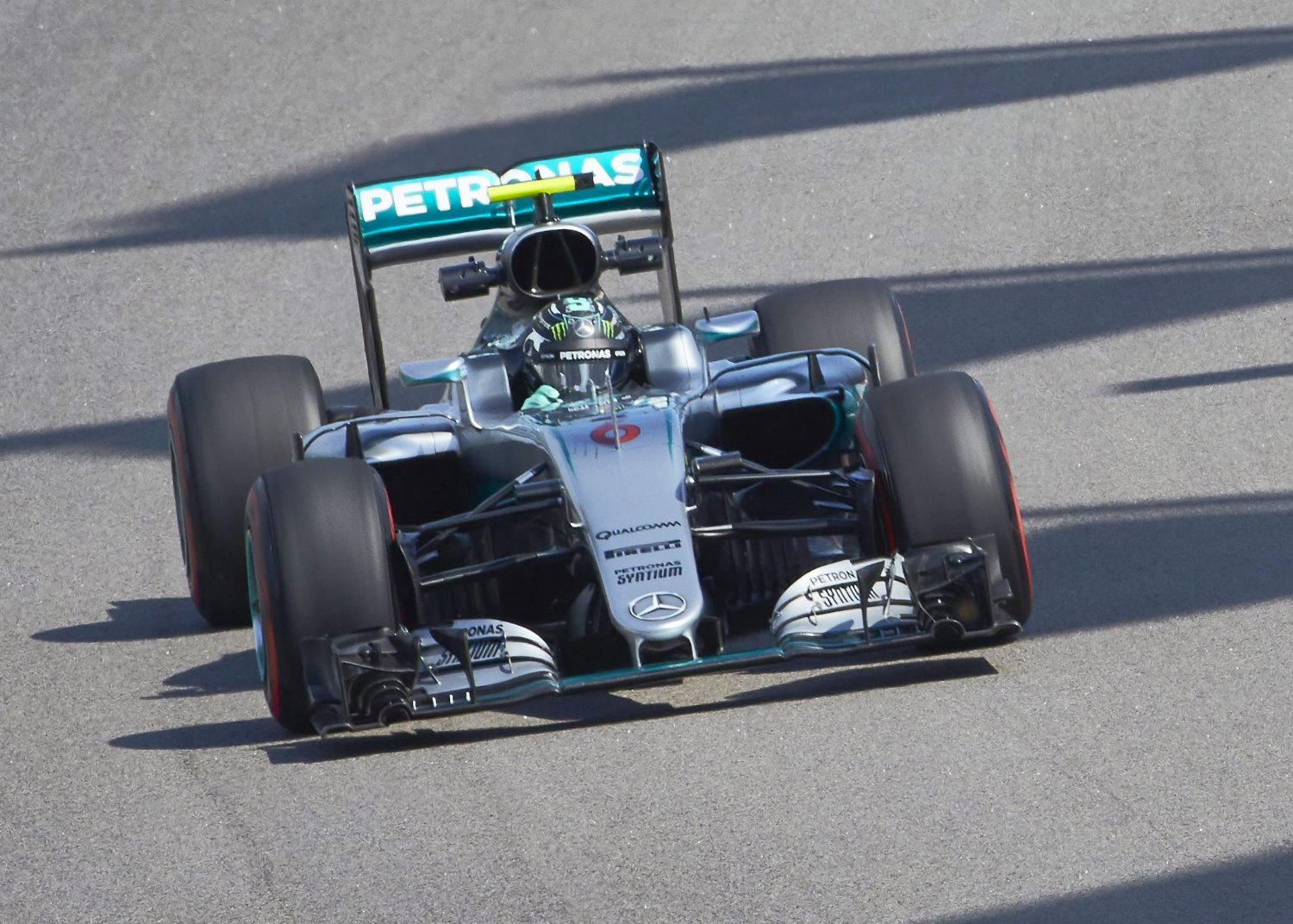 While his Mercedes teammate Lewis Hamilton had an engine component failure and sat out Q3, Nico Rosberg and Mercedes remained the man and machine to beat in Formula 1 by taking pole position for Sunday's Russian GP with a time of 1m35.417s. It was the 24th career pole for Rosberg, tying him with Niki Lauda on the all-time list.

Ferrari's Sebastian Vettel was 2nd quick with a lap of 1m36.123s a full 7/10ths slower than the superior Mercedes. However, he will start 7th after a 5-place grid penalty due to a transmission change on Friday.

Valtteri Bottas was third quick with a lap of 1m36.536s and will move up to 2nd when Vettel moves back to make it an all-Mercedes power front row

Kimi Raikkonen was 4th in the 2nd Ferrari put will start on the inside of Row 2 after Vettel moves back.

With the car 99.9% of the equation in F1, the two Mercedes' drivers had come into qualifying closely matched ahead of a proposed pole position head-to-head, only for Hamilton's challenge to be ended with power unit issues at the end of Q2.

Identified as the same ERS failure that consigned him to the back of the grid in Shanghai, Hamilton was forced out of Q3, leaving him a provisional 10th on the grid. As it stands, it is unclear whether he will take another grid penalty for a component change, but he was also under investigation for not following protocol when re-joining the track after an off in Q1. This will be investigated after the session in a meeting with Charlie Whiting and we will find out exactly where Hamilton will start.

Felipe Massa Williams' was fifth, which becomes fourth, while Daniel Ricciardo rises to fifth position in the leading Red Bull and Sergio Perez also gains a position in a season-best sixth for Force India. Recall last year Perez finished third here so he likes this circuit.

Russian Daniil Kvyat will start eighth position, ahead of Max Verstappen in the Toro Rosso.

Carlos Sainz failed to make it beyond Q2 in 11th position, which could become 10th if Hamilton is moved back.

With regard to Hamilton's engine problem, Toto Wolff told Autosport Mercedes believed it had understood the problem in China so now plans to carry out further analysis.

"What happened today is a bit of a freak failure because it's a scientific assessment process," said Wolff.

"We had a failure in Shanghai which we understood.

"We changed the parts and here we go again, the same thing happens.

"So we need to find out if we have really identified the root cause of the problem.

"Beside that, the car was rock solid. It's a fast car, this weekend probably the fastest so far, and we've had these two unfortunate failures on the MGU-H."

Wolff said Mercedes has yet to decide on a plan of action, such as changing the engine. A decision is not expected before Sunday morning.

"There are many balls in the air at the moment to find out the root cause and what we can do," he said.

"Whether we need some bits from Brixworth which need to be flown in or not and what parts we exchange or not.

[adinserter name="GOOGLE AD"]"I can't tell you precisely yet what we are going to do because I don't know."

However, Wolff confirmed it was not a problem caused by the driver.

"It's certainly not Lewis," he said. "We need to look at settings maybe on the MGU-H, any setting which could have an influence on the functionality of the power unit.

"We have eight power units out there, seven didn't have any problems and one had the problem twice.

"You need to turn every stone and looking at settings, because it happens in the same circumstances – in qualifying twice and on out-laps, not in the race so I wouldn't exclude any failure.

"But it's not something which is obvious because we would have found out. It's not the driver's fault, that's definite."

Nico Rosberg
That was a very strong Qualifying session for me behind the wheel today. I found a great rhythm in Q2, then just turned the front wing down a bit for Q3 and the balance was then absolutely perfect. This is a really rare feeling to have out there in the car, so thank you to the guys for making that happen. I was able to really nail the first lap in Q3 and was quite confident that it was quick enough, so I gave it everything and more on the second lap and had a huge lock up, which is why I abandoned that attempt. I'm happy to have another pole – but tomorrow is a long race and a lot can happen. Even if we are looking strong pace-wise, I can never write off my opponents, that's for sure. They've had some bad luck once again this weekend – Sebastian with his gearbox issue and Lewis with his engine again. But we've seen in previous races that they are able recover quickly and get through the field from behind. Let's see what tomorrow brings…

Lewis Hamilton
It's obviously not a great feeling to be on the sidelines again – but that's life. I knew there was a problem and that it was probably the same failure that I had in China pretty much straight away. I went out for a second run in Q2 to get a feeler lap and felt the same power loss as last time. When it happened in Shanghai it was something we hadn't seen before and now unfortunately it's happened again, so we need to understand it. I've never been superstitious about these things, though, and I never will be. There's nothing I can do about it, so I'll move on and look ahead to the race. I don't know where I'm going to start yet – we'll wait to see how that unfolds. But I never give up and I'll give it all I've got to recover whatever I can in the race, like always. It's not an easy track for overtaking. With the levels of tire degradation and it being so tough to follow here, it's not going to be easy to make my way forward. But there are long straights and we've got good pace, so if I can keep the car in one piece I'll be fighting for decent points I'm sure.

Toto Wolff, Head of Mercedes-Benz Motorsport
It's a bittersweet feeling after qualifying today. Nico took a dominant pole position and the car is really quick here. The team at the track has done a great job and the upgrades we brought are working well. But we didn't get to see the battle we had all hoped for after Lewis suffered a repeat of the failure he experienced in Shanghai. It's so unfortunate for him after the problems he has already faced this season – and of course we have the concern that the same thing could happen again. But this is also part of motor racing. The Power Unit is a core element of performance and one of our biggest strengths. We are pushing hard to find lap time in every area and it's inevitable that sometimes you reach limits in that process. Lewis has handled everything so far this year with calm and professionalism. He is resilient and showing a great attitude, even though this is a tough time for him. For tomorrow, it's clear we are in a strong position in terms of performance. But like the saying goes, to finish first, first you have to finish…

Paddy Lowe, Executive Director (Technical)
A great pole lap for Nico and our congratulations to him on a fantastic performance throughout the weekend so far. Unfortunately, however, our day has been tainted by a failure which deprived Lewis of a shot at pole – and deprived the fans of what would surely have been a thrilling climax to an immensely close battle between our two drivers. We've let Lewis down for the second weekend in a row, so our apologies go to him once again. It's a cruel twist of fate that, out of eight Mercedes-Benz Power Units on the grid, the problem should befall the same driver twice. We've been working very hard over the past couple of weeks to understand what happened in China – but unfortunately there is clearly still more work to be done. Our focus for the immediate future, however, is on making sure Lewis' car is in the best possible condition for tomorrow's race to give him the best chance of making the kind of strong recovery we've seen him pull off so many times in the past.

[adinserter name="GOOGLE AD"]Valtteri Bottas: I’m very pleased with our qualifying performance; it was the maximum result I think we could have achieved, and my lap in Q3 was very good. It now puts us in a very good position for the race and we need to focus on turning a good qualifying, into a good race performance. This is a track that I really like and normally do well at, and it’s a track that suits our car. The new parts we have introduced are helping us, so the team at the factory and track have done a good job in improving the car. We have some fast cars starting behind us which will make the race difficult, but a podium will be the target.

Felipe Massa: It was a good qualifying for us as starting P2 and P4 is positive. We were a bit lucky with the penalties for Ferrari and Mercedes but I think it was definitely a good session. We just need to concentrate to have a good race tomorrow. Anything is possible and it’s probably the best track for us so far this season, so we’ll try and put everything together in the race.

Marcus Ericsson
"Obviously a disappointing result. I felt that FP3 was a little step forward for me, but then again in qualifying I was struggling with the tires. I had issues during the whole weekend to bring them into the right working window. I also had some traffic in qualifying, which did not help. Nevertheless, we were just not fast enough today. Tomorrow we will try to fight back."

Felipe Nasr
"Starting in P19 is surely an unsatisfying result. It is a pity as I was on a good lap at the end of Q1, but then I braked a bit too late into Turn 13. Anyway, I feel more comfortable in the car this weekend and this is what counts. In terms of the car set-up, we made good improvements from session to session, so I will now work on some details for tomorrow. I am positive I can fight for some positions in the race."