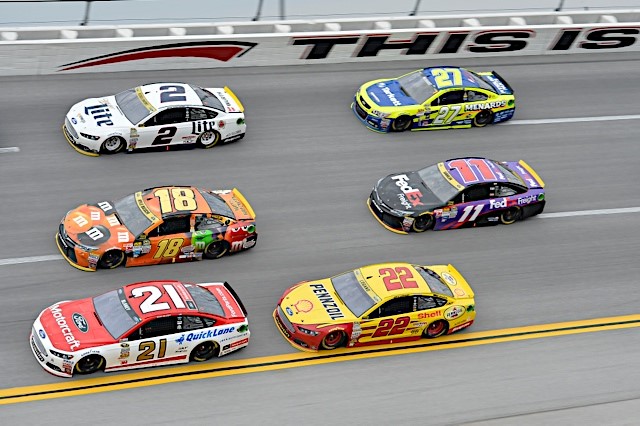 Ford Motor Company in general, and the Wood Brothers in particular, have had some glorious Sunday afternoons at Talladega Superspeedway through the years.

In the early years of the track that opened in 1969, the Wood Brothers won five races from the spring of 1971, when Donnie Allison drove the iconic No. 21 to victory at his home track, until the fall of 1979, when another Alabama driver, the late Neil Bonnett, scored the victory.

In between were three consecutive wins in the spring race by David Pearson, from 1972-1974.

In the 1980s, Bill Elliott, who later drove the No. 21 Motorcraft/Quick Lane Ford for the Woods, put on some awesome displays of speed at Talladega, setting NASCAR’s all-time qualifying record of 212.809 miles per hour in 1987 aboard his No. 9 Thunderbird. (That was before NASCAR began restricting engines to slow speeds at the 2.66-mile track.)

Lately it has been the Ford Fusions from Team Penske putting numbers in Ford’s win column, with Brad Keselowski winning in the fall of 2014 and Joey Logano winning last fall. Logano’s win gave Ford 29 Talladega victories, including seven by the Mercury division.

Through the years, the Wood Brothers have continued to field fast cars at Talladega, with six poles, starting with Allison in ’71 and continuing through a pole in 2004 with Ricky Rudd at the wheel.

The Woods also have 18 top-five finishes, again the most recent being a fourth-place finish by Blaney last spring.

Jeremy Bullins, crew chief of the No. 21 Motorcraft/Quick Lane Ford Fusion, said Ford indeed has a great legacy at Talladega.

“If you look across the history of our sport, from the cars that Leonard Wood prepared to the cars that Bill Elliott dominated with, you have to have confidence in taking a Ford to a restrictor-plate race," Bullins said, adding that the alliance with Team Penske is a big factor these days.

“We have the same fast car we had in Daytona and strong, reliable Roush-Yates power," he said.

“Certainly our Penske alliance gives us a boost as well, with their cars proving they have what it takes to win there, as recently as last fall."

It helps too, Bullins said, that the rookie Blaney has adapted to the chess-match-type mentality needed to succeed at restrictor-plate tracks.

“Ryan has shown a natural instinct for plate racing and had himself in position to contend for a win a year ago," he said. “Hopefully with more experience and the respect of his peers, if we pull out of line this year to make a move for the win we might get some help from other cars."

However the race plays out, Bullins plans to try to keep his driver near the front of the field, figuring that’s the best place to be when and if cars start crashing.

"You know there will be a big pack, and unfortunately that often leads to a big wreck," he said. “But we will use a similar strategy to what's worked for us in the past – to try to keep our car toward the front of the pack so most of the action is behind us and hopefully take good care of our car all day and be where we want to be at the end."

Qualifying for Sunday’s GEICO 500 is set for Saturday at 12:30 p.m. eastern time, and the race is scheduled to start just after 1 p.m. Eastern with TV coverage on FOX.