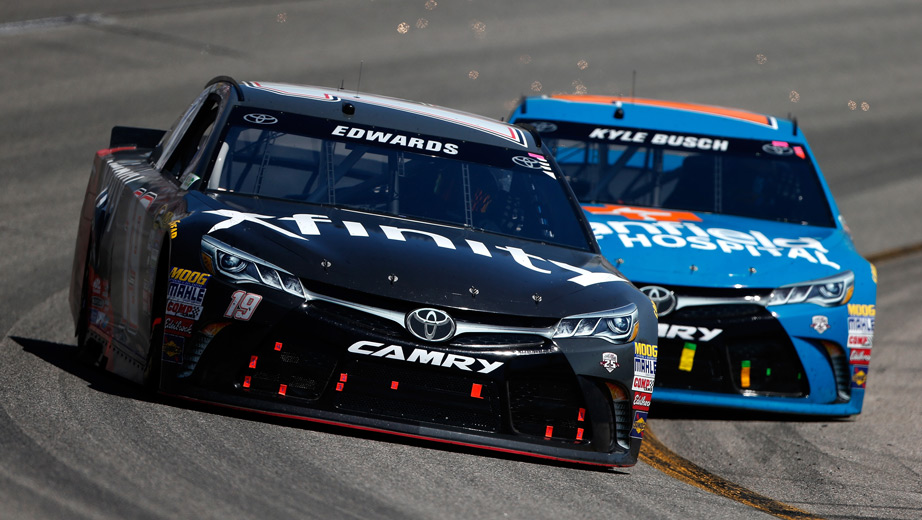 Most any race car driver would have done exactly what Carl Edwards did on the final lap of Sunday’s Toyota Owners 400 at Richmond International Raceway. In second-place entering the final turn, the driver of the No. 19 XFINITY Toyota Camry gave the leader and teammate Kyle Busch a tap in the rear bumper. It was a polite tap mind you, but enough to get Busch lose and allow Edwards to take his 27th career NASCAR Sprint Cup Series victory. Busch finished second.

For starters, it’s not as if Edwards’ maneuver risked repercussion from NASCAR. Any follower of the sport knows the sanction has for better or worse long taken a benign view on such contact particularly late in races. At least in the immediate, there was a lot of upside and very little downside.

Of course, some pointed out that although Edwards got the win Sunday, the move may have reeked of short-sightedness. And yes, I imagine there was an awkward meeting or two at Joe Gibbs Racing headquarters this week. Still, anyone who knows the track record in managing egos of the legendary football coach and team owner, the likelihood is this will be put behind JGR in short order.

I also read a scenario theorizing what might happen if Busch and Edwards were racing for the championship at Homestead in November. And if we are to apply Prison Rules Racing ‘if you dump me, I’m well within my rights to dump you back’ unwritten code, Busch would essentially ‘owe’ Edwards one. Why if Edwards is already in The Chase by virtue of his win last week at Bristol would he want to use up such goodwill, some should have asked?

[adinserter name="GOOGLE AD"]I’ll agree such thinking does make a certain degree of sense in the Prison Rules Racing world of NASCAR. Still, anyone who has spent even minimal time around world-class race car drivers knows they are world class race drivers in large part because well, they don’t think that way. Race car drivers have a unique ability to compartmentalize the dangers of the sport within the context of the job at hand. Edwards and for that matter Busch Sunday, strapped in the car Sunday not thinking about Homestead, The Chase, Talladega this coming weekend, or even what they were doing Sunday night after the race. Rather they strapped into the car with their thinking compartmentalized around earning the best result they possibly could in Sunday’s race.

Fast forward to the final lap Sunday and Edwards saw the opportunity to score a precious Sprint Cup Series victory and did exactly what most any race car driver would have done.

But that doesn’t mean I like it nor think it’s a good practice. Quite the contrary, in fact! And I lay the blame squarely at the feet of NASCAR.

While Edwards demonstrated great skill in catching Busch, other than the previously stated fact that he politely dumped Busch, he showed absolutely no skill in passing him. The only thing Edwards showed was a willingness to play by the code of Prison Rules Racing.

And because as previously outlined, NASCAR has allowed the laws of the prison yard to dictate who wins races and championships, they have created a sport which rewards ruffian behavior at the expense of skill. Think about it, does the NFL allow one player to grab another player’s face-mask on the last play of the Super Bowl? No, the Super Bowl champion is determined by the skill of the players on the field. The team with the best blockers, tacklers, passers, runners, and receivers wins the Super Bowl. The referees don’t allow the laws of the jungle to somehow right itself down the road. In NASCAR they do.

Of course, some will say this policy creates tension and drives interest in the sport. After all, here I am three days later writing about it. And no doubt, they were gooing and gushing over all the social media impressions Monday morning in Daytona Beach. Still, such thinking is so incredibly short sighted.

Whatever interest it does drive is greatly offset by the notion that NASCAR is a show appealing to the lowest common denominator masquerading as a sport. For a sport desperately trying to be accepted by mainstream media as legitimate, the Edwards bump on Busch might get an extra highlight or two on SportsCenter. But again for a sport seeking legitimacy, is this really the kind of coverage NASCAR wants?

I’ll listen to such arguments, but please save the moronic ‘any coverage is good coverage’ responses.

Sadly, this article is likely to make little impression. Many will offer the oh-so-predictable and simplistic it’s a blue-collar Southern sport and this is the way it’s always been arguments; as if there’s nothing more blue collar than someone just pushing another aside to take the spoils of a hard day’s work.

Furthermore, the fact the practice has gone on for years means many NASCAR fans, drivers, officials, etc. are simply numb to it. NASCAR itself simply view it an unalterable part of the culture, when the fact is they could change the policy with the snap of their fingers. Nevertheless, their flawed thinking means any such argument will be dismissed on the idea that in due time Edwards will get his comeuppance.

The irony of course, is NASCAR is completely oblivious to the fact such thinking only serves to further exacerbate the problem.

Brian Carroccio is a senior columnist for AutoRacing and credentialed member of the NASCAR Sprint Cup Series and Verizon IndyCar Series media. He can be contacted at BrianC@AutoRacing1.com.