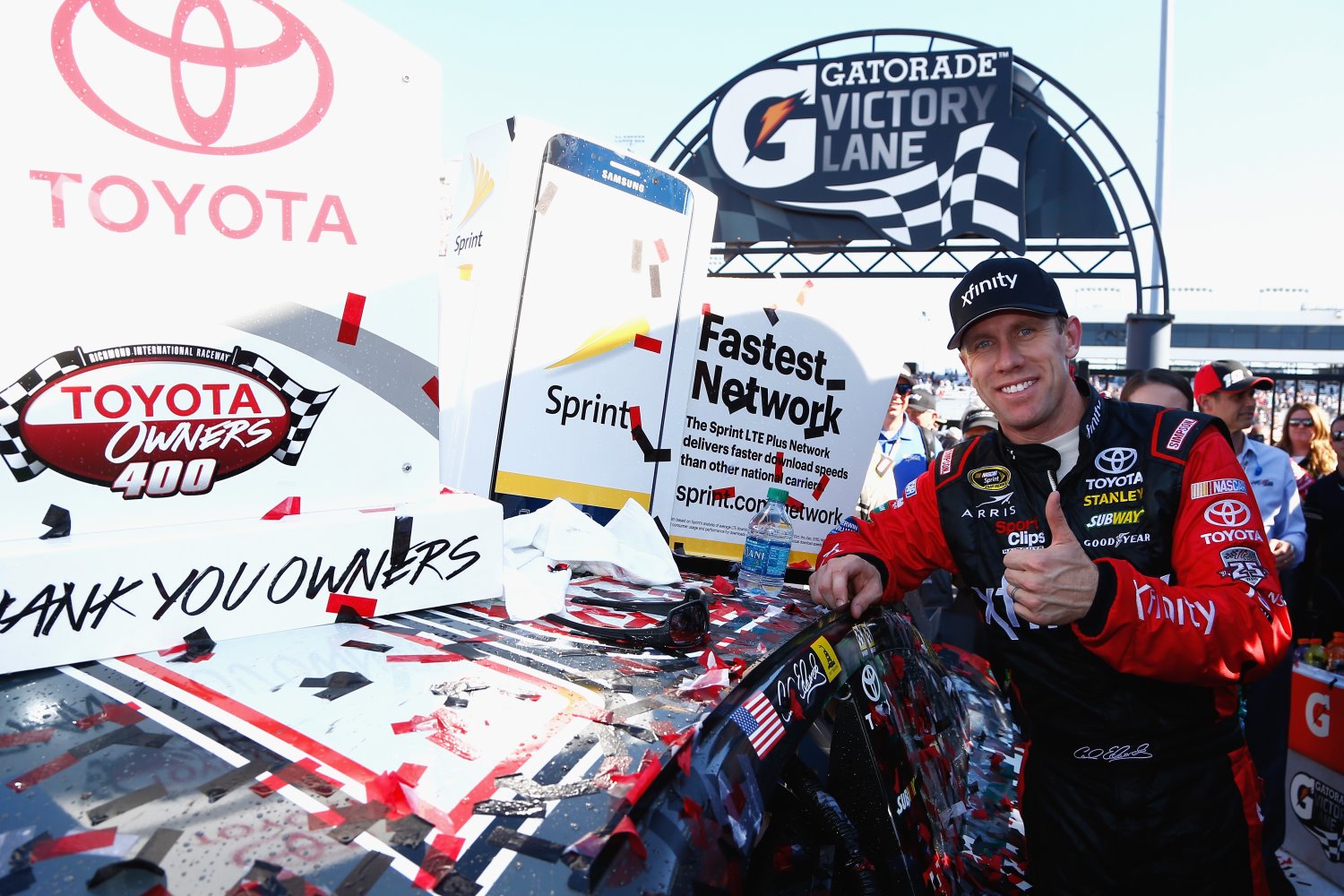 The honeymoon at Joe Gibbs Racing may be over.

Yes, on Sunday at Richmond International Raceway, Carl Edwards won his second straight NASCAR Sprint Cup Series race in the Toyota Owners 400 and the fourth in a row for JGR, but he did so with a last-lap bump-and-run on teammate Kyle Busch, who was seeking his third victory in four events.

"We did everything right — be smart," Busch was told on his radio, after Edwards moved the No. 18 Toyota up the track in Turns 3 and 4 and beat Busch to the finish line by 0.675 seconds.

Busch took the advice. No doubt seething inside at the loss of a race he seemed poised to win, he maintained radio silence.

With a superb pit stop under the eighth and final caution of the race, Busch grabbed the lead for a restart on Lap 365 of 400. He stayed out front until Edwards made up enormous ground by burying his No. 19 Camry into Turn 1 on the final lap.

Edwards applied the coup de grace in the next corner, nudging Busch out of the way to complete the first last-lap pass for the win in the history of the .75-mile track.

Edwards indicated he was willing to take more liberties with his teammate because they had both scored victories this season and are locks to qualify for the Chase for the NASCAR Sprint Cup.

"Kyle's an amazing teammate, and it's like he got really slow there at the end," Edwards said in Victory Lane. "Something happened that last lap. It was like his rear tires went off or something. He went down into (Turn) 1 and I dove it in and I got to him and I thought, ‘Man, I've got something.'

[adinserter name="GOOGLE AD"]"And he went to get down to the bottom and park it in (Turns) 3 and 4, and I had already decided to go down there, so I thought, ‘Man, I'm going to give him a little nudge.' And we both have got wins, and we're racing for fun getting these trophies and (it was) just an awesome day."

"Awesome" is probably not the word the typically outspoken Busch would have chosen, but he was silent on his radio after taking the checkered flag. In his post-race interview in the media center, Busch was as non-committal as retired Seattle Seahawk Marshawn Lynch in the locker room.

Asked whether he expected Edwards to use the bump-and-run for the win, Busch repeated a rote answer he had given to the previous question.

"Our Banfield Camry was real awesome today," Busch said. "We had a great race car. My guys made some awesome adjustments to it. It was really good for us to have an opportunity to run and race for the win like that."

And was Edwards' nudge more excusable because both drivers already had wins?

"My guys give me great race cars each and every week," Busch deadpanned. "We continue to have fast Camrys. We'll be continuing to run up front and race for wins."

Edwards' pursuit of Busch over the last 36 laps was riveting, but so was the action throughout the field. The race featured 23 lead changes (most since 2007) among eight drivers, as cars came to life and faded as the track changed throughout the afternoon.

Kevin Harvick finished fifth ahead of Denny Hamlin and Matt Kenseth, as JGR put all four of its cars in the top seven.

Tony Stewart started 18th and finished 19th, despite suffering a cut tire, in his first race of the season after a back injury and surgery. "Smoke" was up on the wheel from the outset, and from Lap 130 to Lap 145, he waged an intense battle with Edwards in an attempt to stay on the lead lap.

"I was real happy to have him back until about five laps into that battle," Edwards joked.

If Stewart left Richmond with a little more bounce in his step, Edwards left with fences to mend.

"We'll talk about it," he said of the last-lap encounter with Busch.

Team owner Joe Gibbs had to deal with divided loyalties — celebrating with one driver and commiserating with the other.

"I think when something like this happens, I don't think there's a game plan for it," Gibbs said. "You have no real organized way of handling it. What you do is you start out and work your way through it. That's what we'll do.

"So, you know, it's a tough thing because it's certainly painful for one side. You're on such a high with the other side. It's a tough thing. What we'll do is go to work and work our way through it."

Was there any question at all once you caught Kyle Busch that you would bump and run to win?

"Well, yeah, it was a huge question. Kyle's (Busch) an amazing teammate and it's like he got really slow there at the end. Something happened that last lap. It was like his rear tires went off or something. He went down into (turn) one and I dove it in and I got to him and I thought, ‘Man, I've got something.' And he went to get down to the bottom and park it in three and four and I had already decided to go down there so I thought, ‘Man, I'm going to give him a little nudge,' and we both have got wins and we're racing for fun getting these trophies and just an awesome day. I cannot thank XFINITY enough. I hope folks are watching with the X1. It's a revolutionary way to watch TV. Man, I didn't think we had anything. Kyle was so good there for that run. I was doing everything I could. He never spun his tires and if Dave (Rogers, crew chief) hadn't screamed at me to just go get him that last lap I don't know if I would've dove it in there that well. Just a team effort. I can't think ARRIS and Toyota enough. It's a great day for Toyota. They've done so much for me. Just everybody – Comcast, XFINITY all of these guys. And, all of the fans. It's an afternoon race which made it a lot of fun to drive and a bunch of families here. Just very cool. Subway too – it's a big win for us."

Can you take us through the final lap and how close things were with Kyle Busch?

"So going into the white flag Dave (Rogers, crew chief) said something on the radio basically like, ‘Get your butt in gear and go get him.' So, I thought, ‘Heck, I'll drive down there in turn one really far and it looked like Kyle (Busch), his car got real slow that last lap like his tires were just burnt up. He did a really good job keeping me held at bay ‘til then but then we went down the back straightaway and I saw him spin the tires. So, going back down the back straight away I thought, ‘I'm going for the bottom. That's where I'm going.' He went down there and just parked it and his car was sliding and I was just so much faster I had to give him a little tap and we got by him. I didn't think I was going to get him hard enough. I thought it would just be a bump and go but we got the win. We both got wins so it's just racing hard and having fun. I can't thank XFINITY enough for being here and being a part of this. It's really cool."

How much more difficult is that situation when it's a teammate you're racing for the win?

"It's really difficult. I didn't want to touch him at all. I just decided I was going to run the bottom and I went down there and I was like either I've got to lay on the brake and slow down or I can just kind of keep my momentum going and touch him. We were so much faster there at the bottom. If he'd have gone high I don't know, I might have just got by him but it just looked like – I'd have to talk to him but it looks like his car just gave up like he'd just used up his tires. I couldn't catch him up to that point, I thought it was over with about five to go."

How many laps did it take for your Camry to kick in?

"Everybody came and went all day. It was really hard to decide whose car was better where. Early on I was really good on the short run. That last run Kyle (Busch) took off and there was nothing I could do. I thought he had me. I didn't think I'd be able to catch him but man, I have to thank Dave (Rogers, crew chief). He was yelling at me on the radio to keep going and that meant a lot. I don't know if I've ever gone to the white flag and had a crew chief yell at me like that so that got me going."

What happened on the final lap with Carl Edwards?
"It was just racing I guess. We had a great car. The Banfield Pet Hospital Camry was really good today. We were fast. Maybe not as good as Carl (Edwards) was on the long run but we did everything right. We did everything we were supposed to do and put ourselves in the right position. Adam (Stevens, crew chief) made some awesome adjustments to this car. We lost it there the second to last run and were fading a little bit but the guys gave me an awesome pit stop, got me track position and got us out front and we had a shot to win so that's all that matters."

Can you take us through the final lap?

"We had a really great car. The Banfield Pet Hospital Camry was awesome and had really good speed today. Real proud of the guys. We probably weren't the best car on the long runs today, but Adam (Stevens, crew chief) made some phenomenal adjustments in order to keep us continually getting better as the day progressed there. The pit crew did a great job and got us in position and just kind of gave it up a little bit there on the last lap, but I guess that's racing."

How much did the track change throughout the race today?

"A lot. The track changed a lot. There were a lot of things going on. At first you were always tight and then in the end it seemed like we were kind of just getting looser and looser as the day was going. So, real weird the way that was happening. It's definitely different being a day race with how the track was changing."