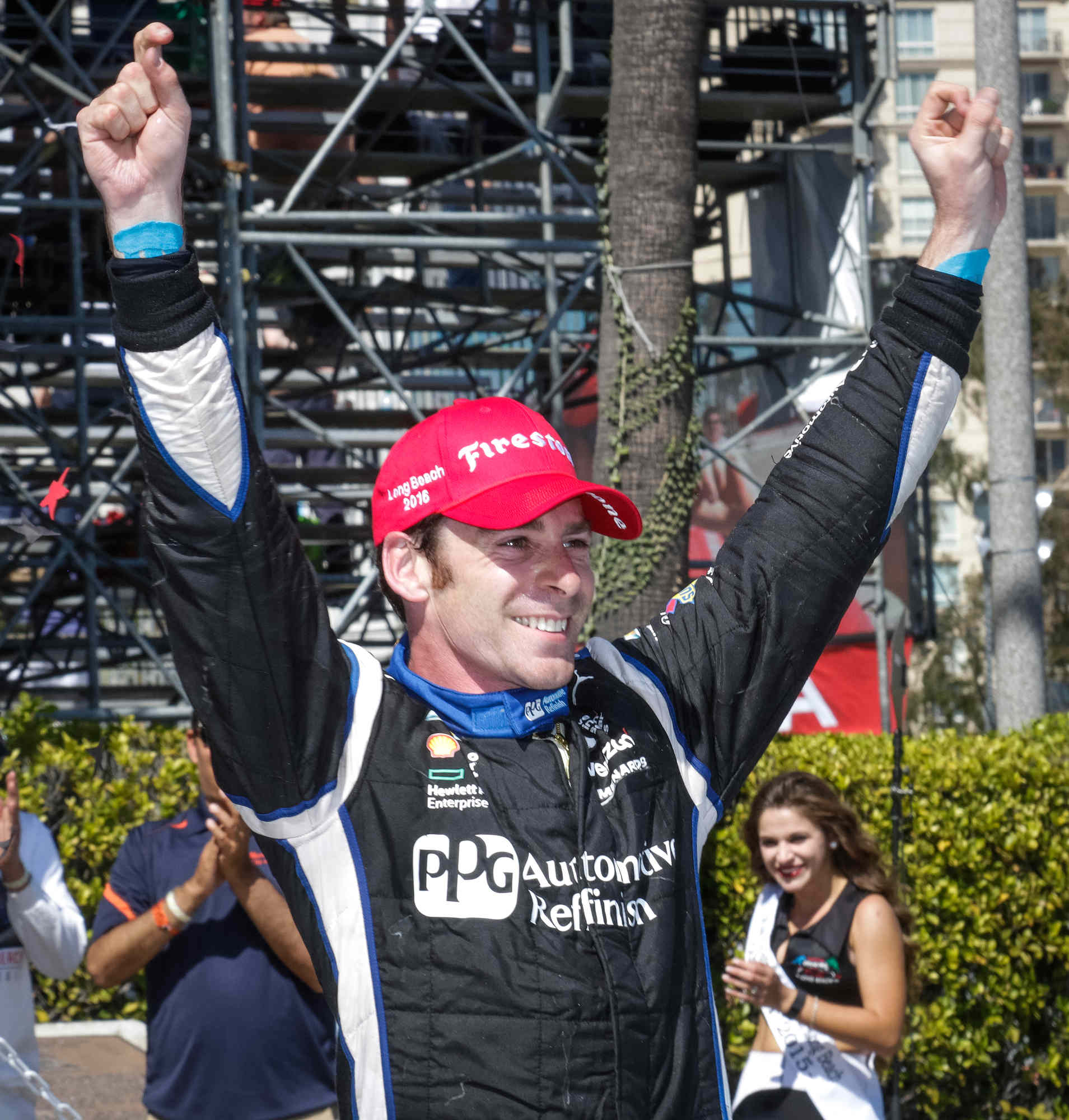 On the one hand it was your typical fare.

The glorious cacophony of California sunshine tempered by the soothing Pacific breeze glistening off palm trees and art deco buildings once again provided an idyllic backdrop for exotic machines powering down Shoreline Drive. And as they have for more than four decades, the crowds packed the house for the latest installment of North America's longest running and most iconic urban festival of speed.

By now you know that en route to scoring victory Pagenaud held off an oncoming Scott Dixon exiting pit lane on lap 55 where he would stay until the finish of the race. Replays showed three and perhaps 4 wheels of the No. 22 PPG Automotive Refinish Team Penske Chevrolet to be on or over the yellow blend line at pit exit, when only 2 are allowed. This, in my opinion, was clear cut: Pagenaud was in violation of the blend line rule.

The matter was reviewed by INDYCAR Race Control, with Pagenaud given a warning to the dismay of Dixon, Target Chip Ganassi Racing, and many IndyCar fans. He would hold off Dixon for the remaining laps and score his fifth career IndyCar victory.

The prevailing sentiment (this was somewhat amplified by the fact Pagenaud drives for Team Penske) was if Pagenaud in fact committed an infraction, as we are to assume by the issuance of a warning, he should have been penalized. Simply put, an infraction in that instance provided a clear advantage in Pagenaud maintaining track position over Dixon. An appropriate sanction in my opinion would have been to have Pagenaud surrender the position to Dixon, but this was not possible (we're getting to that).

Dixon, in post race comments was, in contrast to Sonoma a few years back and other controversy involving himself and Team Penske, measured. However, the Kiwi still made clear he believed Pagenaud should have been penalized. And as Dixon's race strategist and Chip Ganassi managing director Mike Hull noted on television, it is somewhat odd that the penalty would be "leading the race."

Now, Race Control was within its rights in issuing a warning. And yes, per INDYCAR rules, Race Control's other two options were a drive-thru and relegating Pagenaud to the back of the lead lap, which would have been difficult without a caution period, would have been harsh given the infraction.

And yes, Pagenaud's infraction was not the most egregious act one has ever seen. We all remember, for example, Graham Rahal's departure from pit road last year at Auto Club Speedway with his fuel probe still engaged. Rahal proceeded to wiggle the car around to dispose of the buckeye on the track bringing out a caution flag. Rahal would not receive a penalty and go on to win the race. His team was fined $5000 the Wednesday following the race.

Clearly, Pagenaud's infraction was certainly not as blatant.

Further, photo evidence has emerged that other drivers if not outright violated then certainly had questionable re-entries and Race Control took a benign view. One such example is on our Hot News page that shows Dixon on a trajectory of reentering the track which would have put him in violation of the rule.

If this is the case, then Race Control was at least consistent in not punishing any violators.

Still, the revelation that Pagenaud wasn't a solo criminal doesn't put the matter to bed. Because (again assuming there were multiple violators) what we have now is multiple infractions all with no penalty.

My suggestion for Race Control would be to have preset sanctions for infractions. For example, in football the penalty for holding is 10 yards.  While the referee determines if there was a hold, the referee does not determine the punishment. Ten yards in the penalty whether its a preseason game or the final 30 seconds of the Super Bowl. INDYCAR would be better off having a pre-determined punishment for a given infraction, i.e. a blend line violation is a drive-thru. Period.

After all, if there is no penalty for a clear rule violation, something Race Control itself acknowledged, then what is the point in having a rule?

But ultimately the most unfortunate part is that although change was promised change in the offseason, Sunday seemed to be business as usual.

Lost amidst the Pagenaud controversy was arguably the man who drove as well as any this weekend. Helio Castroneves led from pole at the start, surrendering the lead when he came to pit road on lap 26 first to Dixon then to an off-strategy Charlie Kimball. Castroneves reassumed the lead on lap 31, which he would hold until lap 52 before things unraveled for the Brazilian.

Dixon was running close behind Castroneves when the two approached an off the pace Jack Hawksworth. Struggling to get by Hawksworth, Chip Ganassi Racing managing director Mike Hull called Dixon to pit road on lap 51 while Castroneves stayed out until lap 52. Dixon was able to jump Castroneves who continued to be slowed by Hawksworth on his in-lap.

Of course, the greatest beneficiary of the whole exchange would turn out to be Pagenaud, who was able to jump both Castroneves and Dixon by turning two hot laps before his final pit stop. However, let the record show that Castroneves started from pole at both Phoenix and Long Beach, led both races early, and was only forced out of the lead due to circumstances outside his control. And while the results don't show it, I'd argue Castroneves is currently driving the best of anyone in the series. And given the Brazilian has long been a momentum driver, I think you have to like Castroneves as the early favorite to win next month's 100th Indianapolis 500.

Castroneves of course has for many years been a central part of IndyCar racing's greatest rivalry; a rivalry which added another chapter Sunday: Team Penske v. Chip Ganassi Racing.

Although everyone makes nice publicly (most of the time), I can tell you for a fact the two organizations behind the scenes are fierce rivals. Just as Team Penske and longtime Ganassi driver Juan Pablo Montoya losing out at Sonoma in last year's championship finale to longtime nemesis Dixon and Ganassi had to sting inside the Mooresville headquarters, you know Dixon and Ganassi losing out to Pagenaud and Penske made the sting worse Sunday.

However, with much of the field outside the two teams looking for speed, all indications point to the intensity only revving up between these two teams going forward. Also, in recent years Ganassi has clearly gotten the better of Penske having won 6 of the last 8 series championships. Whereas, since the retirement of Dario Franchitti, Dixon has shouldered the overwhelming load for Ganassi, there are more mouths to feed at Team Penske; and trophies can't be cut in quarters. And considering Ganassi's edge over Penske in recent years, you have to wonder how the dynamic within Team Penske may change as the season wears on.

One reason, Penske and Ganassi have such an edge currently, is Honda seems to be completely at a loss as to what to do. Currently, the highest-placed Honda driver in the standings is fifth-place Takuma Sato, who has quietly had a strong start to the season.

Still, if Honda is going to mount a serious challenge to Chevrolet/Penske and Ganassi counting on Sato to carry the torch is probably not the best strategy. It seems as if Honda has gone all in on their new engine scheduled to debut at the Indianapolis 500. And if there isn't a significant improvement there, it's going to be a long season.

There were many cries on social media and elsewhere about the dull racing Sunday. Part of this I believe was the fact many people don't like when Penske and Ganassi dominate. Because there were some exciting exchanges, one being a power move by Pagenaud on Dixon into turn 1 on lap 2 for second-place. Also, the second pit stop exchange between Dixon, Castroneves, and Pagenaud was good stuff.

Of course, aside from a few notable moments the race well, just wasn't that exciting.

Part of this is inevitable as not every race can be exciting. Still, I'll repeat the great lesson of early 2016: less downforce = better racing. My hope is the series is learning that the current technical direction emphasizing aerodynamics is not only costly, but works counter to the quality of the show.