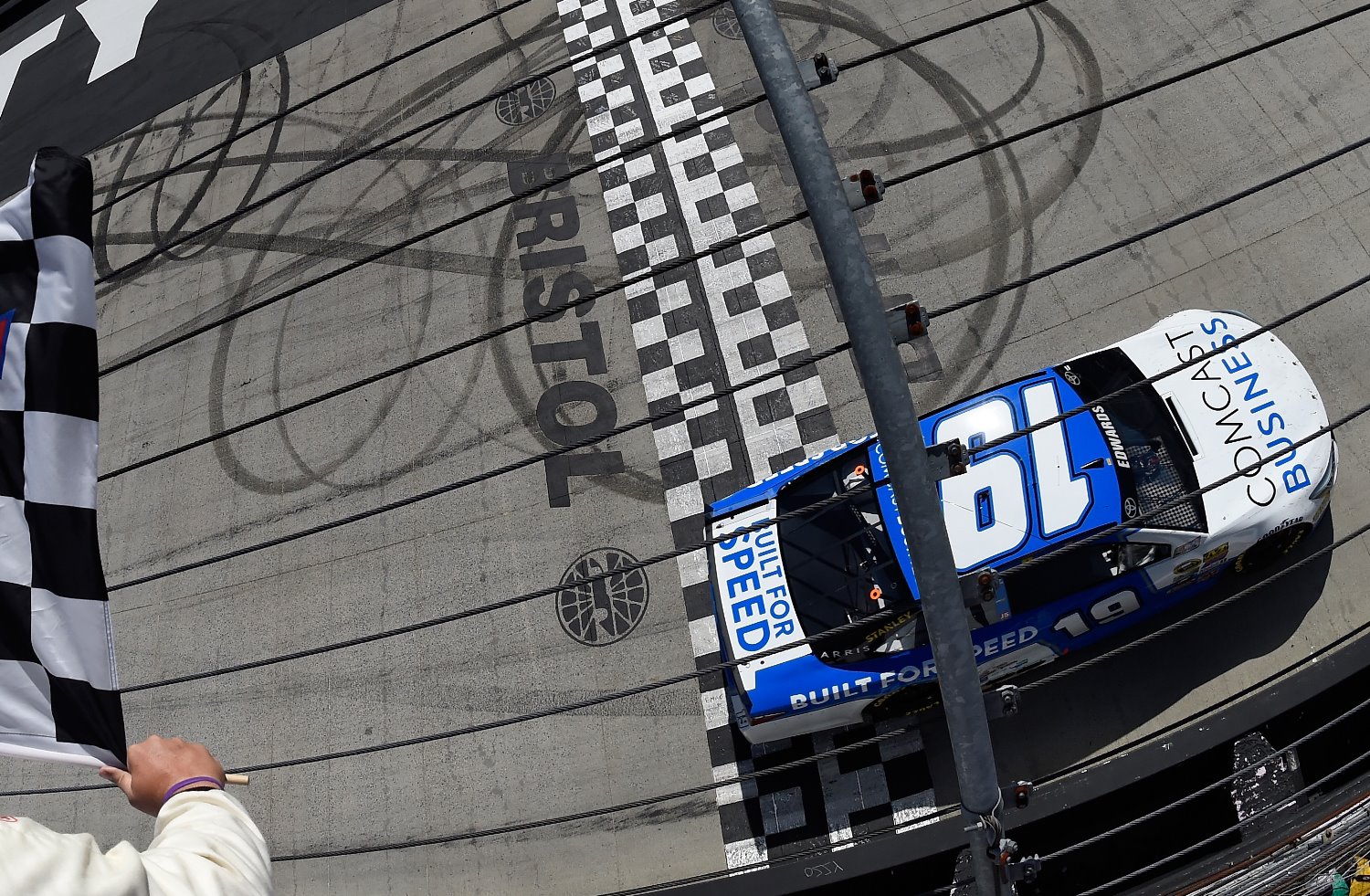 In a typical battle of attrition at historic Bristol Motor Speedway, Carl Edwards drove the No. 19 COMCAST BUSINESS Toyota Camry to victory in today's Food City 500. It was the 26th career NASCAR Sprint Cup Series win for Edwards, fourth at Bristol, and first of 2016.

Edwards now has won four times at Bristol in his career.

The winner of the last two Sprint Cup Series races, Kyle Busch, had problems with his right front tire that twice forced him into the wall and finally out of the race on Lap 258.

And last year’s winner, Matt Kenseth, was forced to the garage on Lap 327 after hitting the wall at Turn 3 on a day filled with tire problems for the No. 20 team, as well. Kenseth had been running in third place when he went to the garage; he returned to the race when he was 36 laps down.

What happened that took you out of the race?

“I have no idea. I just kept getting tighter in the long run, not sure why that was. We had a really great car yesterday and we were fastest in practice. I felt really good about things for today. I guess it wasn’t meant to be. I hate it for all these guys, all the work and effort and everybody at M&M’s – all our M&M’s and Mars associates. Not a day we were hoping for. We had a really fast car. We drove up from the back to the front a couple times and showed what we were made of, but obviously it doesn’t matter when you’re in the garage.

Did you have any indication of the tire issues?

“We just kept getting tighter in the long run. Our car was really good yesterday and we were fast in practice and fast again today. We came from the back to the front a few times and probably one of the few cars able to do that today with as hard as it is the pass. I hate it for all these M&M’s guys and our fans and everybody for us not being out there anymore. I guess today just wasn’t meant to be."

What was the cause of the tire problems you had in the race?

“I’m not sure what started it, but we were a little snug early on in the first run of the race. As the car would run more and more laps it would get tighter and tighter, that’s the weirdest thing that I’ve felt all day and all weekend we haven’t had that problem. Not sure what happened."

Were the tire issues a result of having to push the car too hard coming from the back to the front?

“Once I got single file there after that last restart I was just cruising, I was just riding along and the car felt fine. I don’t know why it kept getting tighter and why we were blowing right fronts."

What was this race like with so many different strategies?

“There were so many different things happening out there. Different guys were fast at different times. I have to work on my drag racing stuff, Kurt (Busch) has those restarts figured out. He was tough. Just awesome. This is a real testament to my team. The guys have been working really hard. We’ve got Comcast Business folks here and they helped put this whole thing together with ARRIS and Toyota, TRD, Stanley – all the folks that made this 19 team happen. Just great and so awesome. Thanks to Sprint and Cessna and all the folks that make this happen. Now we’re in the Chase and we can go have some fun. Just so cool, awesome to be here."

Were you concerned about tire wear after what happened to your teammates?

“There was some concern, but for some reason with our car we didn’t have any of those issues. Just really proud of these guys and thank you to everybody that makes this happen. This team is awesome and Dave (Rogers, crew chief) doesn’t quit. He can almost read my mind, he can tell me things in the race right when I needed them. It was just a good day."

What does it mean to get the win here at Bristol for this race team?

“Just a real testament to our team – we have really fast race cars. Those restarts are tough, everybody is so good. Kurt (Busch) does an amazing job, I don’t know if his drag racing or something is paying off, but I have to learn what he’s doing. He could get so much grip down on the bottom. Just a lot of fun, really good day and really proud of my guys – flawless on pit road. This is such a special place to win and really proud of my team."

What was your strategy on the final restarts?

“They’re hard to remember exactly how they went, I was zoned out there. It’s tough, but the leader has an advantage there on the top and that’s good, but you also go down into turns one and two and I hadn’t forgot what Kurt was able to do on that one restart – he just drove me and got underneath me and made it happen. I knew I had to step it up and fortunately we had the outside lane and everything worked out. It’s so cool to win here, I can’t thank the fans enough for coming out and hope they enjoyed Colossus. It’s cool to be a part of this."

Were you worried about landing the backflip?

“This is the oldest I’ve ever been and I was nervous about it to be honest with you. It’s so cool to see all those fans up there cheering and the people up there supporting this 19 team."

YOU STARTED OUT WITH THE ISSUE WITH THE ELECTRONIC CONTROL UNIT RIGHT OFF THE BAT, BUT YOU CAME BACK WITH A NICE 2ND PLACE FINISH

“We had a lot of luck on those last several restarts. You start on the outside and just gain some spots just being on the right lane. We didn’t have a good enough car to run in the top 5 today, but Greg (Ives, crew chief) and those guys did a great job getting our laps back. We had a dead battery at the start of the race; something bad like that, same thing I think happened to the No. 22 (Joey Logano). That cost us two laps early in the race and we worked real hard. Greg did a great job helping us get our laps back. The car was about a 15th or 10th place car. We were just lucky on those restarts as to where we lined up. And that really helped us."

YOU WERE A LOT BETTER THAN A TOP 10 CAR. BEST FINISH OF THE YEAR. WHAT WAS THE DIFFERENCE FOR YOU TODAY?

“We just battled through it. Junior had trouble at the start and I was 40th when we started the race. One car at a time. One set of tires at a time. And then we were in great position around lap 350. We got the lead from (Carl) Edwards for a little bit. And we just kept working on it. And there’s nothing more that I could have gotten out of the car. I’m really happy with the way that everybody worked together. I shouldn’t be happy about finishing 3rd, but I’ll take it. It’s just a great effort. And the way that this team has come together is perfect. We just need to find that last little bit. Thanks to Haas Automation, Monster Energy, and Chevrolet. It’s just wonderful to have a good group of guys to go out there each week to have a shot at it. And, I still don’t think I’m supposed to be happy about finishing 3rd. But, Edwards ran a great race. Congratulations to him."

YOU MADE IT LOOK EASY, BUT IT WASN’T. YOU WERE TWO LAPS DOWN AFTER A LOOSE WHEEL AT ONE POINT. HOW DID YOU OVERCOME THAT?

“I just had a really good Kelley Blue Book/NAPA Chevrolet. The guys brought a fast car here this weekend. Started off a little slow. I didn’t qualify as well as we wanted to on Friday, but we hit on a couple of things, I thought, right there towards the end of final practice yesterday that we really liked. Fortunately that carried over to today and I was able to move forward. I hated to have a loose wheel, but stuff happens. The guys did a good job having a good pit stop under green. We only ended up losing two laps and that gave us a shot to get back. One down, and then trying to get back to the lead lap. It was a long day but I’m definitely proud of the effort. We’re chipping away, just not close enough."