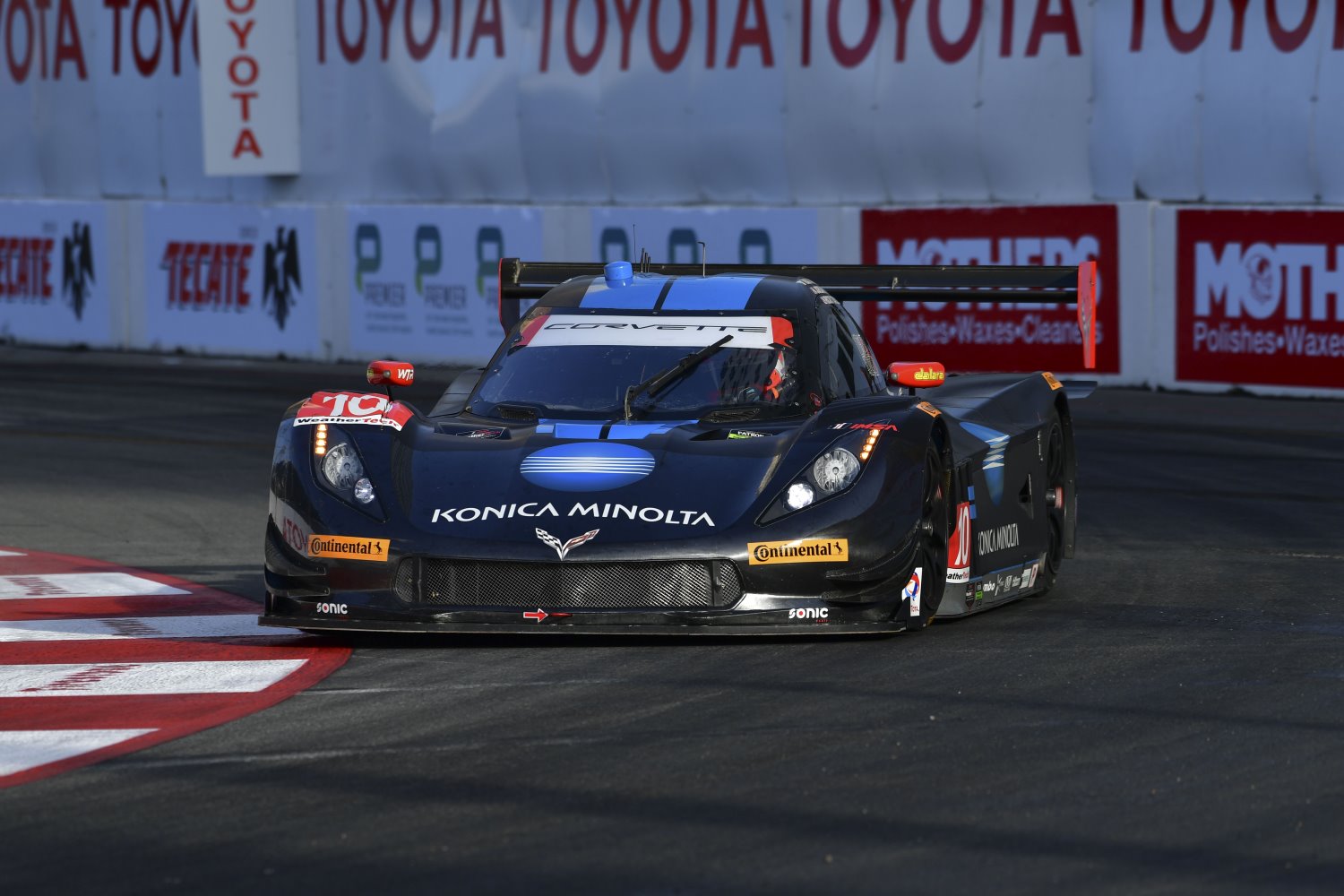 Chevrolet swept the podium in the Prototype class for the Bubba Burger Sports Car Grand Prix of Long Beach, and Chevy nearly took the top spot in the GT Le Mans class, but was punted off the top step of the podium in a controversial late-race incident.

The overall winners were Ricky Taylor and his brother Jordan, who defended their 2015 win at Long Beach in the IMSA WeatherTech SportsCar Championship. The Taylor brothers were driving their father’s No. 10 Wayne Taylor Racing Konica Minolta Chevrolet Corvette Daytona Prototype.

Their winning margin was nearly three seconds ahead of the No. 5 Action Express Mustang Sampling Corvette DP of fast qualifier Christian Fittipaldi and his partner, Joao Barbosa. Their team car, the No. 31 Whelen Corvette DP, finished third with drivers Eric Curran and Dane Cameron.

Ricky Taylor in the No. 10 and polesitter Christian Fittipaldi lined up on the front row, and when the green flag fell, Taylor made a banzai pass on the inside of the first turn, giving him the lead and pulling the Mazda Prototype of Tom Long along with him, leaving Fittipaldi in third.

Fittipaldi was angry, but only at himself. “I wasn’t aggressive enough on the start," he said. “Hats off to those guys."

The consolation prize is that Fittipaldi and Barbosa, who have never done well at Long Beach, now have the season points lead as they go for their third straight championship.

The two Mazdas finished fourth and fifth, their best showing ever.

The controversial finish in GT Le Mans involved the two Corvette Racing C7.Rs and the two Porsche North America Porsche 911 RSRs. The two Porsches were dominating the race, but when the pair made a pit stop, both cars exceeded the pit lane speed limit, and were forced to serve stop-and-go penalties.

This put the No. 911 and 912 well back, as the Nos. 3 and 4 Corvette C7.Rs assumed the top two positions. But luckily for the Porsches, the race’s only caution flag fell when Colin Braun’s No. 54 Prototype Challenge car, which had been damaged in an earlier crash, stopped on the track.

This allowed the Porsches to close up behind the Corvettes, and as the race wound down, it was Tommy Milner in the No. 4 Corvette, followed by Antonio Garcia in the No. 3 Corvette, then the No. 912 Porsche of Frederic Makowiecki and the No. 911 Porsche of Nick Tandy.

The Porsches hounded Garcia until he spun on his own, and the two Porsches got by. They then closed up on the leading Corvette of Milner. With less than four minutes left, Makowiecki speared the right rear of Milner’s Corvette, taking both cars out, and allowing Makowiecki’s teammate, Tandy, to get by for the lead, and for the win.

The only good news for Milner and the Corvette: He was far enough ahead of the next GTLM car, the No. Risi Competizione Ferrari 488 GTE of Toni Vilander and Giancarlo Fisichella, that he still was able to resume in second, with the Ferrari third. Damage to Makowiecki’s car sent him to the pits, dropping him to seventh in the class.

In Prototype Challenge, which hasn’t raced in Long Beach since 2013, the winners were Misha Goikhberg and Stephen Simpson, drivers of the No. 85 JDC-Miller Motorsports ORECA-Chevrolet.

A close second was the No. 8 Starworks car of Renger van der Zande and Alex Popow, and third was the No. 38 Performance Tech car of James French and Kyle Marcelli. This despite the fact that Marcelli wrecked the car on the last lap, but as with the No. 4 Corvette, he was far enough ahead of the fourth-place car when the race ended that he still was credited with a podium finish.

The No. 85 car also won its class at the Rolex 24 At Daytona. “Winning is addictive," Simpson said, “and we want more of it."

They’ll get their chance April 29-May 1 at the Continental Monterey Grand Prix at Mazda Raceway Laguna Seca, the fourth race in the IMSA WeatherTech SportsCar Championship.

FROM THE RESTART, IT LOOKED LIKE A COMPLETE DIFFERENT MACHINE

“Well, it wasn’t much different. I just think the two guys behind us were racing each other a little bit and the No. 5 (Barbosa Fittipaldi) wasn’t as near, so it kind of gave us some freedom to push. But, I think if it wasn’t for Ricky’s (Taylor) start, getting us into the lead, right up to the end, we wouldn’t have had a chance because track position was key. And the guys kept us up front with that pit stop. So, it was a tough day. But I’m glad to have Konica Minolta back in Victory Lane here in Long Beach."

IN THAT DRIVER CHANGE, WHAT COULD YOU TELL YOUR BROTHER TO MAKE THE CAR BETTER? I KNOW YOU WERE TALKING ABOUT A BRAKE BIAS CHANGE

“Yeah, we were actually having some TC issues, so I would give the team suggestions, but I told them not to talk because he (Jordan Taylor) figures it out on his own anyway. But, it’s cool. This race, three years ago, when Konica Minolta started with us and we’ve had three second or first-place finishes. So, it’s just awesome. We couldn’t be happier."