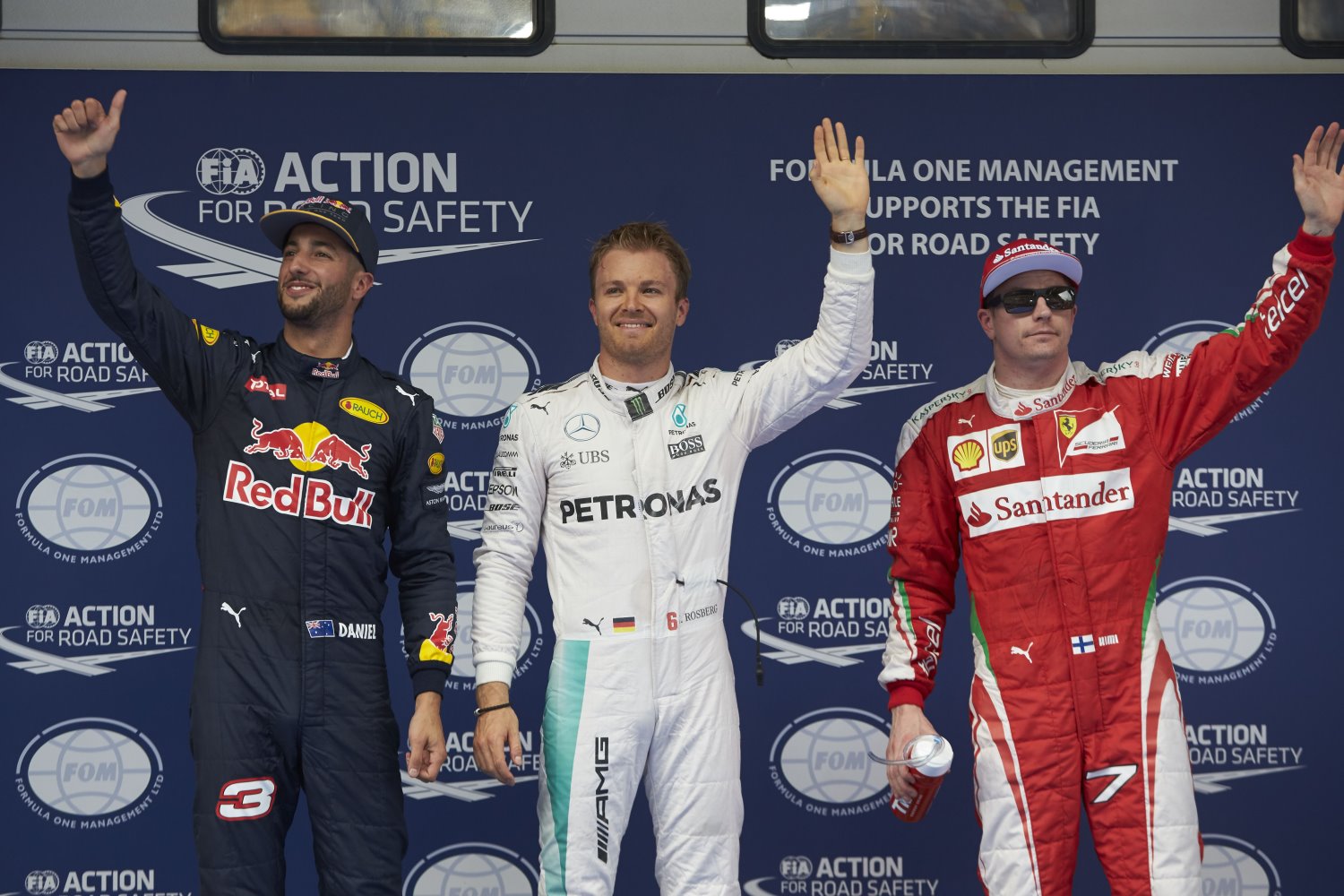 Q: Nico, it all looked fairly in control, a little bit of a glitch at the start of the session with Lewis, but how does that feel for you?

Nico Rosberg: I'm pleased of course. The whole weekend has gone well. The car was handling well in qualifying, you know, so to get the lap done and to put it on pole, I'm happy about that of course. Not ecstatic, because of course Lewis had bad luck and his car broke down so the fight didn't happen but anyways I'm pleased.

Q: Daniel, you pulled that one out of the bag at the last minute, your second time on the front row here. Where did that come from?

Daniel Ricciardo: I'm not sure! To be honest the qualifying – I didn't think we started in the best position in Q1 in terms of it being a disrupted session. Just with the balance we didn't seem like we were really going to be in a fight with the front few rows today and then in Q3 we found a bit more speed. The option here, the supersoft, it's a tricky tire to manage. To get the one lap out of it is not exactly easy, it gets chewed up quite a bit as the lap goes on. I think just understanding that as the session goes on and obviously between me understanding a bit more what to do on track and the engineer making a few adjustments with pressures and front wing and I think we got a good package at the end and second is pretty awesome, we didn't expect this.

Q: Thank you. Kimi, coming to you, Ferrari look good on the supersofts, but there was a maybe a mistake on your last run. Was there more to get out of it?

Kimi Raikkonen: Yeah, I mean even the previous run, same corner I ran really deep, too deep, and in the last one I was quite a bit up on that lap and I just ran wide on the hairpin and obviously I lost a lot of time. It's a shame, I think we had a chance to be even on the top today, but that's how it goes and we try to make the best out of it tomorrow.

Q: Thank you. Coming back to you Nico. Looking ahead to tomorrow, you obviously went on the soft tire in Q2, so that's the tire you start on. Does that leave you with a significant advantage tomorrow do you think?

NR: I'm not sure, I haven't dug into strategy stuff so much yet, but I would think that it's going to a good thing, for sure, to start with that tire and maybe it gives me a bit of an advantage over the others but as I say I'm not sure yet, we need to look into it tonight.

Q: Nico, once again you seemed able to pull out another half second gap in that final run in Q3. Where's that coming from. Where are you finding that?

NR: Well, I think the team is just doing a great job and we have the fastest car out there – and that's it. We're putting it together in qualifying and it's great to see. But Kimi did a big mistake – apparently, I haven't seen it – and lost quite a lot of time, so it would have been… my lap was very good, so it would have been very, very close. That's what we were expecting actually. That's why I needed to pull one out, to make sure that I can be on pole today. And I'm glad that it worked out.

Q: Daniel, you've been on the front row here before but it looks like you've definitely found something here. It bodes well for the future?

DR: Yeah. The start of the season, obviously we've only had a couple of races but up until now, this point, I think we've exceeded or maximized everything that we've got. We showed true dry pace today. I got a front row here a couple of years ago but that was in the wet. We always know we're a bit stronger in the wet, at least the last few years, so to get a front row in dry conditions, it's awesome – and yeah, it's testament to how far we've come since the end of 2015. We'll try to keep doing it. It feels good to be back up here. I know it's only quali but the plan is to be back here tomorrow after the race We're kicking goals at the moment. Really happy.

Q: Kimi, what's likely to happen for you tomorrow in the race? What can you do? Especially with Nico starting on that soft tire and being able to go a lot longer in that first stint.

KR: I don't know! Not going to start guessing or anything. Quite disappointed about what happened in qualifying but third is not a bad place to start. On the better side still. We have to make a normal good start and go from there – obviously then see how it pans out. I'm sure the circuit is not in ideal conditions today after the rain. Hopefully tomorrow it is more close to what it was yesterday. But who knows? We'll try to make the fastest race and see what it brings, if we can fight against the guys that are in front of us or not, we will see.

Q: (Dan Knutson – Auto Action/Speedsport magazines) Daniel, as you say, great one lap pace, and you hope to be back here tomorrow but how do you see the race going over a whole race distance with the pace of the car?

DR: I think today's encouraging. If we can have this on one lap, in the race we should still be pretty competitive. We're normally a bit better off in the race. Let's see. I think the race will be… hopefully we've got a race with Ferrari. I think Nico, starting on the softs, should be in good shape but let's see. I hope to have a race with the Ferrari and if we can battle for the podium, that will be awesome. The track changed quite a lot today, this afternoon. Compared to yesterday I felt the balance was quite a long way different. Depends if it goes back towards yesterday track conditions or if it stays as today. That will probably dictate where we end up in the race, what the track temp does tomorrow and if it wears out the front tires or wears out the rears. I think that's going to be a determining factor. Hopefully we're on the good end of that. I think we should be. Looking forward to it.

Q: (Haoran Zhou – Top Driver) Question to all drivers. Because of the unique structure of the grandstand we have a wet patch just before the start line and another at the entry to Turn One. We would like to know, did that affect how you approached the start of your flying lap at all – especially in Q1?

NR: It was difficult initially, quite tricky, as we saw with Wehrlein also, and so even on the last lap, just to keep it safe, I didn't use DRS over the patch, for example.

KR: Yeah, at the start it was slippery but at the end it was OK to go full speed DRS but it wasn't completely dry. Not ideal but that's how it is.

DR: It was the same, first Q1 and Q2 without the DRS, just to play it safe and then Q3 we managed to keep it open. It's not so much the wet patch, it's the bump, which then unloads the rear and then, on the wet it's coincidence where the bump is and where the bridge, I guess… yes, it's more the bump than the wet patch itself causing some issues. It was, yeah, a bit edgy the first few runs and then it was OK.

Q: (Michael Schmidt – Auto Motor und Sport) Kimi, did you consider like Sebastian to save a set of Supersofts for the race and, if not, why not? And can you say where you lost the time – I didn't see your lap, unfortunately.

KR: Obviously we had different options what to do but we will not know what was the best for tomorrow. I decided to go out again and it was a good lap until, I think, Turn 14, the end of the back straight, the hairpin. I almost ran off the circuit there. Not idea but that's how it is.

Q: (Keren Wang – Top Driver) One question for Nico. As Lewis has encountered some engine situation or power unit failure, have you encountered any similar situations today, so far?

NR: No, I haven't. I had an issue yesterday. Need to have a look and try to understand that. Of course it's bad luck for Lewis today, definitely.