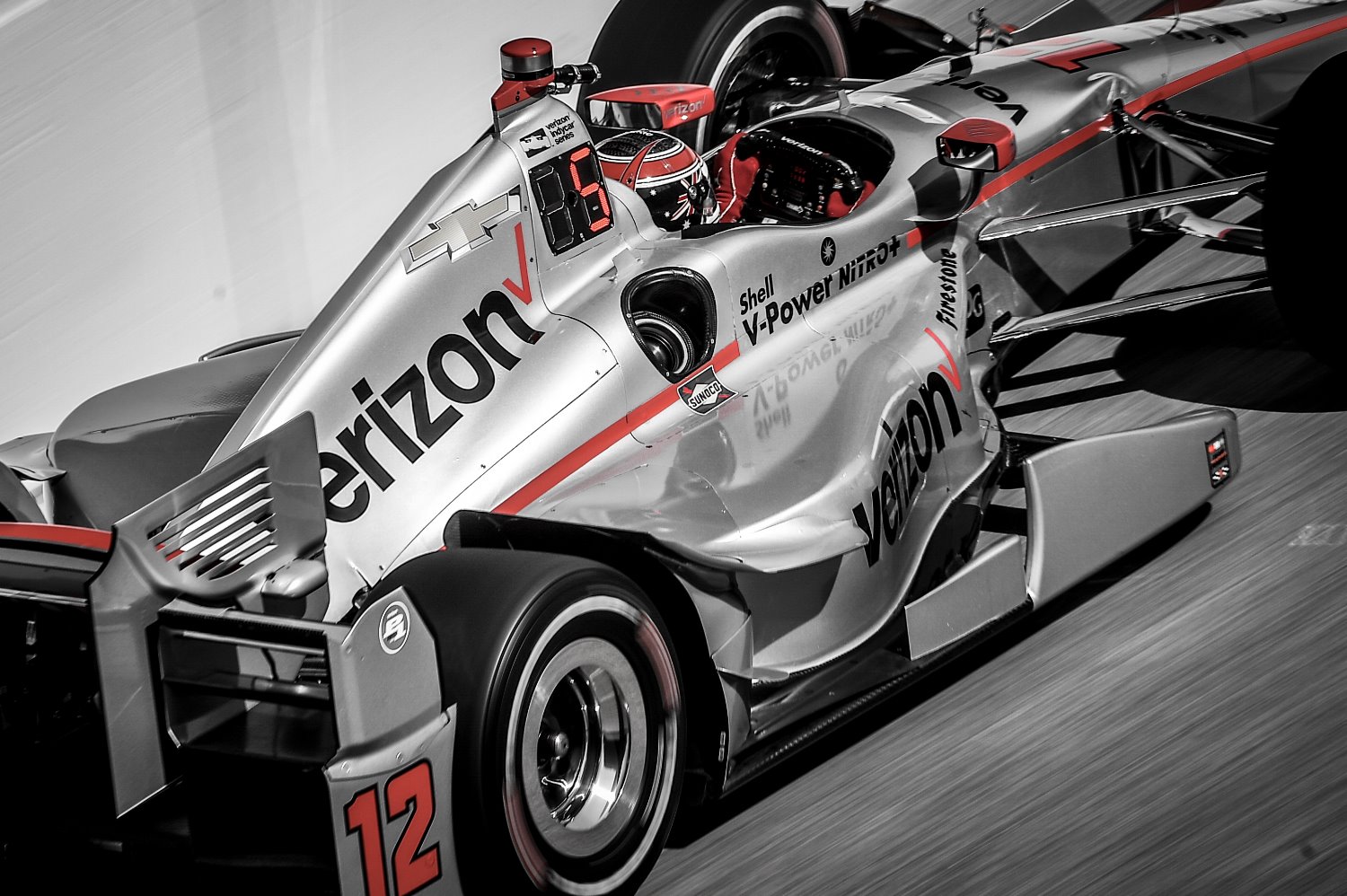 Joined now by our second fastest driver of the day, James Hinchcliffe. Obviously it's been a difficult start to the season for you. This is just practice, but it has to feel good to come out of a day feeling like you've had a fairly strong day.

JAMES HINCHCLIFFE: Absolutely. Everything is relative. We've had a difficult start to the season, but not like the end of my last one. It's easy to still sleep well at night knowing things could be worse.

We had a strong car in St. Pete, qualified decently, inside the top 10 there. The race didn't play out. Phoenix was its own deal. We're looking to try to turn that around this weekend, start getting some points on the board.

It's a track I really like coming to, an event I love coming to. The car was great off the truck. Made very few changes over lunch, which is always a nice thing when you're not thrashing. The pace was still relatively decent this afternoon. It doesn't matter till it matters, but it's definitely a good starting point for us.

THE MODERATOR: What is it about this track that's so historic and special?

JAMES HINCHCLIFFE: It's great. This event in general is so awesome. You don't successfully pull something off for 42 years unless you're doing something right. They do a lot right here. The circuit itself as far as street courses go is one of the most unique. You have some of the coolest corners in street course racing with the hairpin and the fountain.

Even corners like turn six, an increasing radius, a bunch of elevation, things you don't see in street courses. I think it's what makes the track pretty special and unique and a good challenge for the drivers.

THE MODERATOR: A couple weeks ago we were in Phoenix on an oval. Is it hard to come from a race like that to a street course in Long Beach?

Q: Does it really help your confidence on a Honda team when you come to a street course where it appears that you're on fairly equal footing with the other aero kit?

JAMES HINCHCLIFFE: Doesn't hurt. I think if you look at St. Pete compared to a year prior, the difference was noticeable. I mean, the Hondas were very competitive, right up there with the competition. We kind of expected a similar sort of scenario here.

Obviously Phoenix was a bit of an anomaly. Internally we're looking into why that happened quite the way it did. We were never worried that was going to be a trend.

Coming here I think we proved that. I haven't seen the full rundown yet, but I know there were a couple guys running up front. Graham was strong. Hawksworth was strong. Hunter-Reay is always quick here. He'll find his way to the front. I think we're going to see a much more even field in that sense.

JAMES HINCHCLIFFE: You know, honestly we were pretty pleased with the package in St. Pete. We didn't change a lot fundamentally. There's little things you do different here just because it suits this circuit better than St. Pete. The fundamentals were all pretty similar.

Like I said, our race was kind of over before it started in turn one there. Once we got running again, the race pace was good. We were pretty happy with the racecar we had. Unloaded pretty much with that package. It seems to be working pretty well so far here.

Q: I have a follow-up question. Do you think the rules tweak, IndyCar announced the sidewalls, do you think that will have a desired effect to make it a more desirable kind of a car to drive? Will it help, in your opinion?

JAMES HINCHCLIFFE: For sure it's going to help. Any bit of downforce you can get on the bottom of the car is going to help the racing. It's never been about manufacturer equivalency for me, it's been about putting on a good show, a good race. I think everybody agrees.

It's physics. If you put downforce on the bottom of the car, you're going to be able to follow more closely and have better racing. For sure I think the sidewall extensions are going to have a positive effect on the racing.

THE MODERATOR: We're joined by Will Power, who was our fastest driver of the day.

Will, it seems like it's pretty old hat for you to come out of a weekend starting very strong at the top of the charts. How is the weekend going for you so far?

JAMES HINCHCLIFFE: He hasn't puked yet, so that's a start (laughter).

WILL POWER: It's obviously been good. You don't want to know what I did this morning. But anyway…

Got a good setup. This morning, learned some stuff off one, we're progressing well. So this is a track where I've struggled the last couple years in qualifying, kind of starting way back there. I really want to start up the front and give myself a better chance at winning the race.

Q: Will, in one race you were able to work your way up to 12th in points. Is it conceivable that by the time you leave Indianapolis you could be right back toward leading the points?

WILL POWER: If it's mathematically possible, yes. Obviously if everything goes well, yeah, I can be right there.

Q: James, what do you think about Will’s rebound after giving everyone a free race by missing St. Pete?

JAMES HINCHCLIFFE: I've given them two unfortunately (laughter). Even a worse hole.

I mean, you sit in a position like this and you just think back to like every year, Dixon has won the championship except '08. Anything is possible. There's still so much racing to go. Even Dixon over the course of a season has two or three races where things don't go his way, DNF's, whatever.

I think you only have to finish an average of 7.5 or something to win the championship. There's still a lot of racing to try to get up there.

Q: Will, when you started your racing career, did you ever think that so much time was going to be spent talking about the contents of what's in or out of your stomach?

WILL POWER: Yeah, no (laughter).

Q: Will, domed skids. A Honda driver said this morning that maybe the Chevy drivers weren't so happy with those either, said that you told him your car was terrible to drive. Was it difficult? What is your true opinion?

WILL POWER: I just said the day was very windy, so with them on or off, it was difficult.

I think the racing will be fine, I really do, because ever since we blocked off the rear bumpers, it's created a massive draft. No one will get away. I think it will be the same as last year, it really will.

Q: Are either of you concerned that all the domed skid talk is overshadowing not the next couple races but the month of May itself?

JAMES HINCHCLIFFE: I think once we get to the race on Sunday… The decision has been made. Up to this point, it was up in the air what was going to happen. Now we know what's going to happen. By Sunday we'll have a race to talk about. I think everybody was just bored after Phoenix.

WILL POWER: Got to have something to talk about, man.

Q: Back to the Long Beach Grand Prix. How important is tomorrow's qualifying in terms of how difficult it is to pass at this joint?

JAMES HINCHCLIFFE: Yeah, I mean, you say that, but Will's won this race from 12th before. It's all relative. Strategy always plays a part here because there's inevitably cautions here, except last year, there was one at the beginning.

But, you know, it's always better to start up front. Obviously that's what we're all going to be trying to do, try to get in that Firestone Fast Six, start in the first couple rows.

It's not game over here if you don't. There are strategy options. It's kind of that cool length of race where you can try to make two stops work, try to make three stops work.

Yeah, we'll see how it plays out.

Q: Could you tell us a little bit about the flaps and how they may affect or not affect the car at Indy that they've talked about?

WILL POWER: The sidewalls? The rear flaps? I'm interested to see who is going to try it out first. I really, really don't want to be that guy.

Q: Any consequence in driving the car normally?

JAMES HINCHCLIFFE: Zero effect on the car, which is why they're so lovely compared to other things.

Q: What’s the point of a domed skid if the rear flaps are already there?

WILL POWER: Because the domed skid stops it flying when it's sideways. The flaps are for backwards.

JAMES HINCHCLIFFE: If you start getting airborne sideways, the flaps are going to be a whole lot less effective. That's the point.

THE MODERATOR: Thanks, guys.