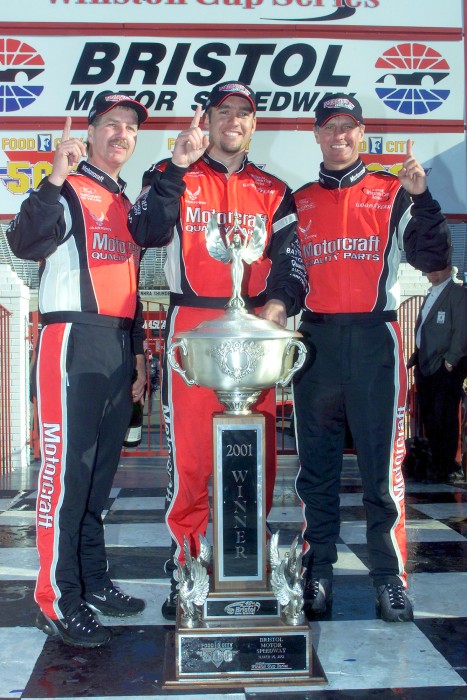 When it comes to iconic teams in NASCAR, few have as much history as the Wood Brothers from Stuart, Va., and the Pettys from Level Cross, N.C.

Although the members of the respective families have been friends for decades, they also have been rivals on the track, and that continues through today.

Over the years, the two teams and their drivers have played starring roles in some of the all-time historic finishes in NASCAR history. The two teams’ legendary drivers David Pearson and Richard Petty hold the all-time NASCAR record for 1-2 finishes with 63, with Pearson winning 33 races to Petty’s 30.

There have been many other 1-2 finishes for the Woods and the Pettys over the years, but the last 1-2 finish for the pair came 15 years ago in the Food City 500 at Bristol Motor Speedway as Elliott Sadler, driving the No. 21 for the Woods, held off John Andretti in the No. 43 for the Pettys.

The victory also was historic in that it was the first for Ford Customer Service Division, utilizing the Motorcraft brand. That relationship has now grown into the Motorcraft/Quick Lane sponsorship 15 years later.

The win also was unique in that the winning strategy involved stretching a set of tires and fuel to the limit to gain track position in the closing laps. Crew chief Pat Tryson brought Sadler to pit road for the final time with 170 laps remaining. Sadler took the lead from Kevin Harvick with 58 laps remaining and held off Andretti by 0.426 seconds to get the victory, his first as a driver in the Cup series.

Eddie Wood, co-owner of the No. 21 Motorcraft/Quick Lane Ford Fusion, said the finish reminded him of the glory years of the 1960s and 1970s, when 1-2 finishes by the Woods and the Pettys happened quite often, especially on the superspeedways.

“It was very special at the time," Wood said. “It was like the old days with both of us up front at the end."

The victory also was rewarding for the Woods because they’d experienced disappointments in earlier races at Bristol, one of the most difficult tracks on the circuit.

“I remember we were there a long time after the race," Wood said, explaining that the post-race interviews and other commitments kept them busy until well after dark. “We were parked about a mile and a half away, at the same place we always park."

“Somebody offered us a ride on a golf cart, and my brother Len said he wanted to walk. He said we’d made that walk with our heads hung low a lot of times, and he wanted to make that same walk now that we finally had a good finish."

Eddie Wood said believes there will be another race in the future that his family’s team will be squaring off for the win with the No. 43 of the team now known as Richard Petty Motorsports, which like the No. 21 is a part of the Ford team.

“Bristol is the first place I met the 43 family, Lee Petty, Richard Petty, Maurice Petty and Dale Inman, back when I was 16 years old," he said. “The Pettys today are still some of our best friends. The first person I look up when I get to the track every week is Dale Inman."

“I look forward to running 1-2 with them again for a win, no matter how it turns out."

Both the No. 21 and the No. 43 Fords have young drivers who have shown they can succeed at Bristol. Aric Almirola, in the No. 43, finished third in the Food City 500 two years ago, and Ryan Blaney, driver of the No. 21 Motorcraft/Quick Lane Ford Fusion, is the defending winner of the Camping World Truck Series race at Bristol and was an Xfinity Series winner there in 2014.

“The goal for us this weekend is to have a good solid run at one of the most unforgiving race tracks on the circuit. Things happen very quickly there." Wood said. “We had a fast car at Bristol with Ryan last fall, and he has shown that he knows how to get around that track really well."

Qualifying for the Food City 500 is set for Friday at 4:15 p.m., and the race is scheduled to get the green flag just after 1 p.m. on Sunday with TV coverage on FOX.