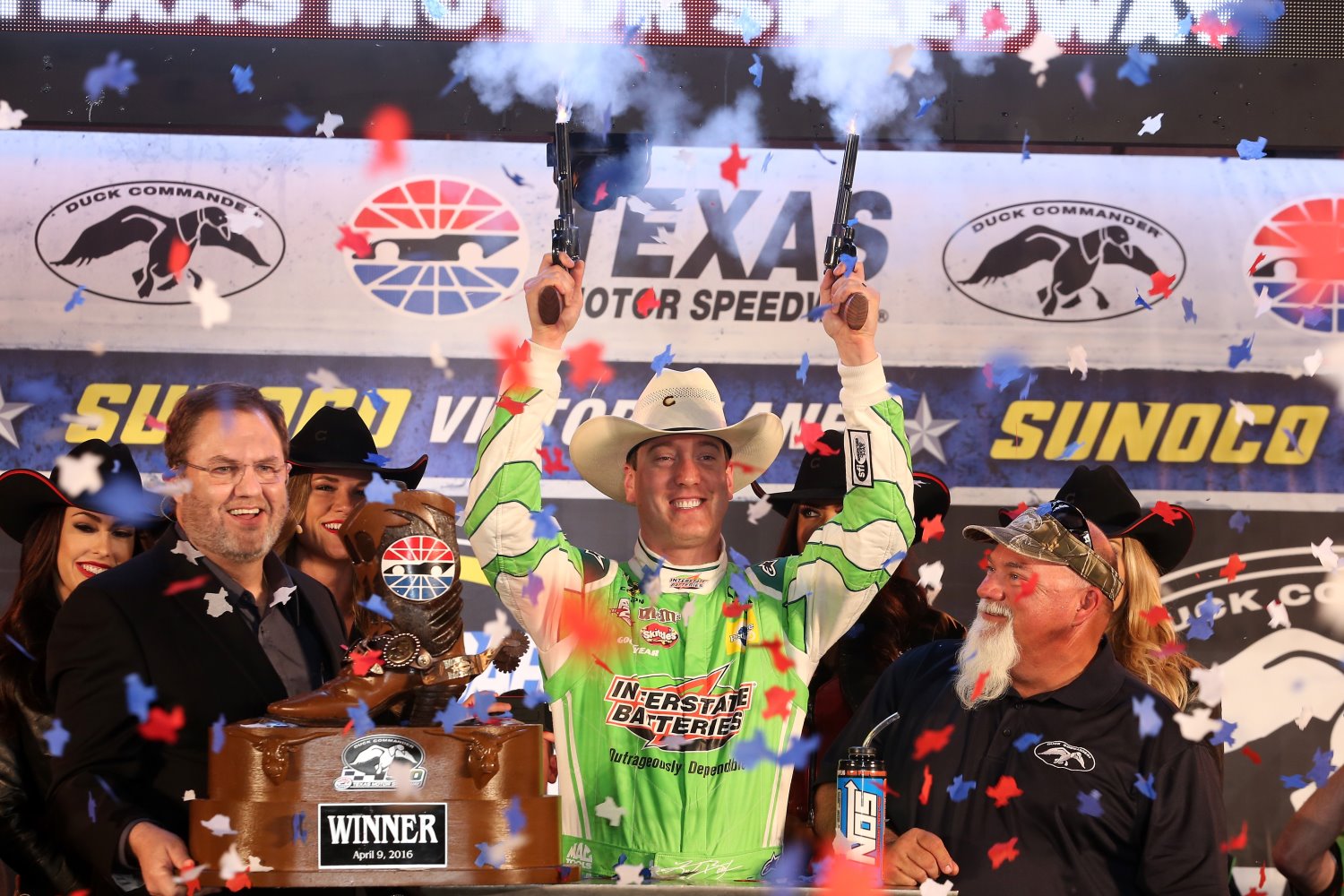 Busch led 34 of 334 laps in the Joe Gibbs Racing No. 18 Toyota and held on for a 3.904-second margin of victory in the Duck Commander 500. Busch's second Sprint Cup win of the season was his second in a row, his second at the 1.5-mile track and the 36th of his Sprint Cup career.

Martin Truex Jr. led six times for a race-high 141 laps, but was bypassed by several cars on fresher tires near the end. The Furniture Row Racing driver, seeking his first victory of the season, faded to a sixth-place finish.

[adinserter name="GOOGLE AD"]Busch emerged from a rash of late-race caution periods, including a major 13-car mishap in the 293rd lap that severely impacted the teams of Richard Childress Racing and Roush Fenway Racing.

Johnson's three-race win streak at the Fort Worth track ended after a pair of pitfalls. His Hendrick Motorsports No. 48 Chevy suffered front-end damage during the race's first pit stop when he ran into the rear of Busch's No. 18 entry. He was later caught a lap down by a caution flag during a cycle of pit stops, leaving him with a significant deficit. Johnson also dodged the major wreck near the end with a remarkable save.

What did it take to get your Camry to victory lane at Texas?

"Just communication and to keep talking, making changes to our race car to make it better. This Interstate Batteries Camry was fast. It had really good speed in entry and the center of the corner, but we really had to work on the exit of the corner. The guys did a great job. Adam (Stevens, crew chief) made some great adjustments all night long. I think the race track kept coming to us as the night progressed, too. I can't say enough about Norm Miller, Scott Miller and the whole Interstate Batteries – they're great partners with us. What better way than to celebrate 25 years of a partnership than right here in victory lane with them in their hometown here in Texas. That's pretty special. Can't forget M&M's of course, NOS Energy Drink and Sprint. The Fans of course and Toyota – this TRD (Toyota Racing Development) engine was strong all night long. It was really fast and these guys just continue to impress me."

What does it feel like to win four NASCAR races in eight days?

"It's pretty darn good, I'll tell you that. I've got a great wife, a great son and I'm having a blast, living the dream with Adam Stevens (crew chief) and these guys, and Joe (Gibbs, JGR owner) and JD (Gibbs, JGR co-chairman), thinking about you guys back at home and of course Coy (Gibbs, JGR COO) is here with us. Everybody back at the shop has been building great race cars, they've been doing a great job for us. The crew chiefs here have been really working together, gelling together and putting everything together. It's just fun, right now it's all clicking and going together. I think it's maybe a little bit of a struggle for (Matt) Kenseth right now, but man, I've been in that position before, you just have to fight through it. Maybe I can give the old man a little bit of advice this week, I'll talk to him. Things are great for our team. Can't say enough about our team. Cool to be here in Texas."

"Our Interstate Batteries Camry was really fast, especially in entry and center of the corner. As the night progressed, I think the track actually came to us a little bit. Our car got a little bit better. Adam (Stevens, crew chief) and the guys made great pit stops all night long. We were struggling in the beginning, we weren't very good. Our other teammates, they were really fast. The 19 (Carl Edwards), 78 (Martin Truex Jr.) and I don't know what happened to the 19 (at the end). I know the 78, we just out tired him there at the end. Just overall a great night for JGR (Joe Gibbs Racing) and Toyota."

What was going through your mind on the final restart?

"We had like two-cycled, three-lap scuffs right there to Martin (Truex Jr.) two-cycled, six-lap scuffs. The restart was going to be key. If I could just get out in front of him, I knew I could protect the rest of the race. They had a good restart, but we got a better one and I just had to get up on his door. He chose the inside and the inside has been winning the race all night long, but this time on the last restart it finally prevailed for us."

"We got a little behind and got caught on pit road on that one caution. We had a fast car, probably good enough to win. Martin (Truex Jr.) probably had the best car, but the best car doesn't always win. Kyle (Busch) did a great job on the outside on that last restart. Truss's tires were worse than I thought. We finished up there where we should have. We need a win. We'd love a win; I know our fans want a win really bad. Trust me man, we're all working really hard and running great every week. Hopefully that's fun for everyone to watch. I had a blast inside the car – a lot of sliding around sideways and good, hard racing. We'll go to the next one I guess and try again."

COULD YOU HAVE CAUGHT KYLE BUSCH?

"I didn't think Kyle was making any missteps up there. He was running some pretty competitive laps. I don't think we could have caught him. Kyle just kind of got too far out there, and Kyle knows how to hammer down when it matters. We had a great car. We got caught out on pit road there one time with a crash and got the lucky dog. We were in the top-three all night. I'm really happy with the Nationwide Chevy. The guys did an amazing job putting a great racecar on the track. We're fast every week. Wins are going to come. We just have to keep doing this and it'll be our day one day."

ON HIS NIGHT AT TEXAS MOTOR SPEEDWAY:

"We overcame a lot today. On that first pit stop, everyone was checking up and I hammered the back of the 18. We had to fix damage on the nose, and it wasn't pretty. There's a big hole up front and that couldn't have been helping us at all. There's a lot of fight in this Lowe's team today. I'm thankful for the great equipment and the fight that these guys have because with all the damage and adversity we went through tonight, to come home fourth is really good for this Lowe's Chevrolet."

WAS THE DAMAGE WORSE THAN YOU THOUGHT?
"Chad (Knaus) did a nice job of selling on the radio. He said on the radio it wasn't too bad. Looking at it, it's really bad. So I'm really glad we finished as well as we did."

ON HIS TOP FIVE FINISH:

"Yeah, it was a step in the right direction. We're definitely not satisfied running fifth. I feel like we have a group of guys that are capable of doing that. We'll keep digging at it. We have a long way to go with a lot of racing to go in the season. We'll keep working to get where we can roll with those guys."

IF YOU HAD TO DO IT OVER AGAIN, WOULD YOU STILL HAVE DECIDED TO COME GET THOSE FOUR TIRES ON THE LAST STOP?
"I think so. Being on offense is good. With Alan's decisions, I'm going to be all for whether they go good or bad. Whatever he says, I'm in for and we'll make the most of it."