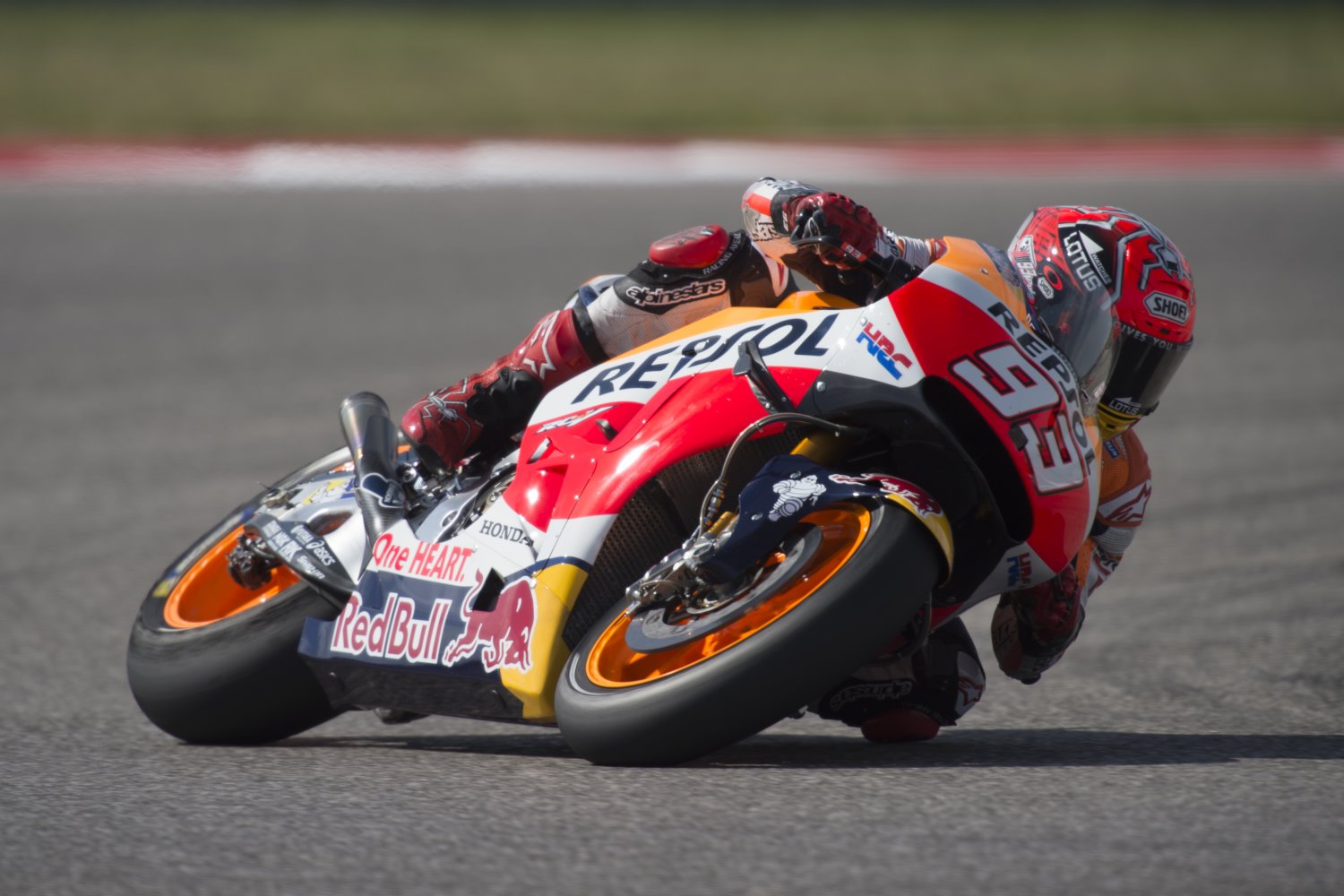 The MotoGP World Championship headed out for a titanic 15 minute Q2 session. All eyes were on Marc Marquez (Repsol Honda Team) as he was expected to again walk the field at a track that he has made his own. The Spaniard opted for the softer option front and rear while Jorge Lorenzo (Movistar Yamaha MotoGP), Dani Pedrosa (Repsol Honda Team) and Cal Crutchlow (LCR) went with the medium front option.

But Marquez responded immediately and dropped to a 2’03.188, just over a second off his own pole record and 0.425s faster than Lorenzo’s time. After their first runs were complete, Lorenzo was the only rider within a second of Marquez.

Their battled continued as Lorenzo dropped his time to a 2’03.257, 0.069s behind Marquez and the closest a rider had been to him throughout the entire weekend. Neither rider would be able to improve their time, despite getting tantalizingly close on multiple occasions.

This meant for the fourth consecutive year, Marc Marquez secured pole position at the Red Bull Grand Prix of the Americas. Not only did he continue his domination of the Texas track, but Marquez also claimed the 60th pole position of his career and will have his first back-to-back starts from pole since the German and Indianapolis GPs in 2015.

After a difficult start to the weekend, Lorenzo was relieved to take second place and gave the Marquez something to think about as he got within a tenth of him. It’s clear the Majorcan has the pace to stick with Marquez for a lap, but can he do it over race distance?

The gap was slightly larger to Valentino Rossi (Movistar Yamaha MotoGP) in third, the Italian 0.387s behind his teammate and 0.456s back on Marquez. He may not have challenged for pole, but Rossi remains adamant that the front row will allow him to stay with the leading duo. Interestingly, Rossi used his bike with winglets to secure third, one of the first times he has used the winglets to achieve a fast lap. This is Rossi’s first back-to-back front row starts since the Malaysian and Australian GPs way back in 2013.

Fourth and leading the Ducati charge in the session was Andrea Iannone (Ducati Team). The Italian has been strong over the course of the weekend and he had been one of the few able to consistently get within a second of Marquez. Unfortunately Andrea Iannone will be demoted to seventh for Sunday’s race as a result of his attempted last lap pass in Argentina.

Maverick Vinales (Team Suzuki Ecstar) produced the fifth fastest time and will be moved to fourth as a result of Iannone’s penalty. Back in 2015, Vinales started from 12th on the grid at COTA, riding to ninth in the race. If he can again gain at least three places in the race, Vinales could very well be looking at a first visit to the podium. The Circuit of the Americas was the scene of Vinales’ first Moto2 victory in 2014.

Sixth in the session and the leading Independent Team rider, Cal Crutchlow (LCR Honda) will move to fifth on the grid for Sunday’s race. After two difficult opening rounds, Crutchlow is out to remain upright and score his first points of the year.

Andrea Dovizioso (Ducati Team), Dani Pedrosa (Repsol Honda Team), Aleix Espargaro (Team Suzuki Ecstar) and Scott Redding (Octo Pramac Yakhnich) completed the top ten. From Vinales in fifth to Loris Baz (Avintia Ducati) in 12th, under a second split the eight riders. While the leading four may be in a league of their own, the battle for the top ten looks tighter than ever.

Jack Miller (Estrella Galicia 0,0 Marc VDS) did not participate in Qualifying due to a broken fifth metatarsal in his right foot after a Friday fall. It was announced during the FP4 session that the Australian will miss the race and return to action in Jerez.

Marc Marquez #93 1ST 2'03.188
"I’m really happy with this pole position. It looks like I feel good here in America. Maybe I didn’t do the perfect lap in qualifying and both Yamahas are closer but we’ll try to manage as best as possible tomorrow. I'm happy with how the weekend is going in general, I feel a little better with the bike every time I go out on track and our pace for the race seems competitive. The tyres are working quite well, but of course, as always here at Austin, making the right choice for the front will be crucial. It will be a tough race, both physically and in terms of lap times, because even though it doesn't seem like it, everything is pretty tight, but I feel comfortable and I think I have the chance to fight for the victory."