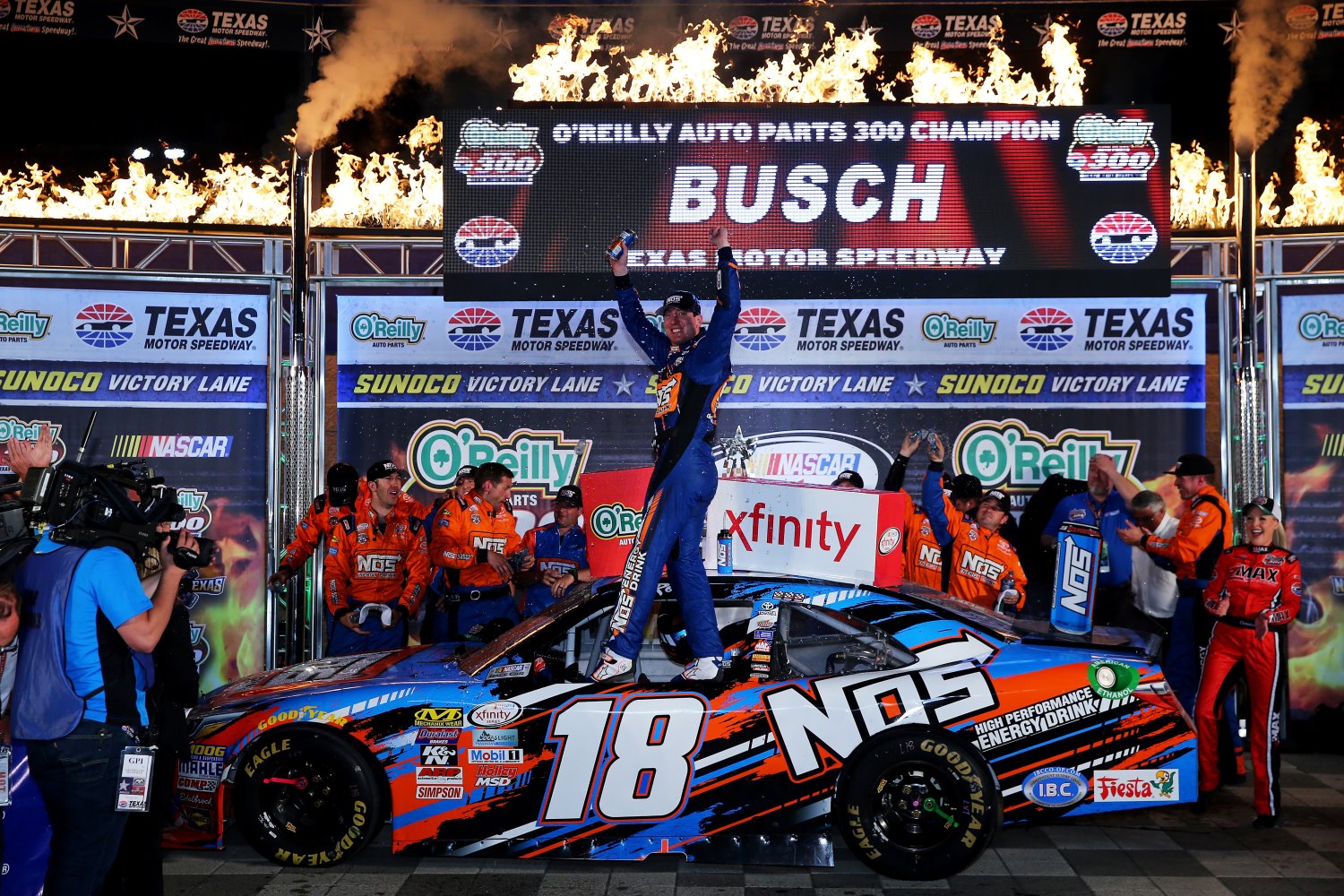 Kyle Busch broke his NASCAR XFINITY Series "losing streak" on Friday night and in the process moved into rarefied air in the Lone Star State.

With a dominating victory from the pole in the O'Reilly Auto Parts 300 at Texas Motor Speedway, Busch won for the fourth time in five XFINITY starts this year. His only loss in that stretch was a second-place run after a late blown tire robbed him of victory in his last outing at Auto Club Speedway.

But on Friday night, Busch was back to his winning ways, leading a race-high 150 of 200 laps at the 1.5-mile track, notching his record eighth victory at Texas and extending his own series record to 80 triumphs.

But he already has eight winner's cowboy hats from the XFINITY Series alone (and 12 overall).

"I guess you have a spare one for every day of the week," Busch said with a grin. "It certainly is a good problem to have. We've had some really good runs here over the years, and we've been really fast. This NOS Energy Drink Camry was great.

Series leader Daniel Suarez finished 16th, one lap down, after spinning in Turn 4 on Lap 77 and saw his margin in the standings over second-place Sadler shrink to one point.

Jones was relegated to the rear of the field after his pit crew jumped over the wall too soon on a stop under caution on Lap 77. But Jones recovered adroitly, powering his No. 20 Toyota through the field to claim the runner-up spot.

"Getting the penalty didn't help but it wasn't the reason we ran second either," Jones said. "We just didn't take a big enough swing to free it up (on the final pit stop on Lap 148). The track just tightened up as it rubbered up. Then it got slick again and we didn't keep up with it enough."

Busch had retaken the lead from Kyle Larson on Lap 120 and opened a lead of more than three seconds before Jeb Burton's Ford blew a tire on Lap 144, slammed the Turn 2 wall and collected Blake Koch's Chevrolet in the process.

"I was really, really tight, and I was chattering tires all night," Burton said after he was released from the infield care center. "I went into (Turn) 1, and I thought I had a problem, but it was too late."

With a strong push from Jones, Busch held the top spot after a restart on Lap 152, and by the time the lap count reached 181 of 200, his advantage had ballooned to 2.9 seconds. The rest was academic, as Busch maintained a comfortable working margin and arrived at the finish line 3.055 seconds ahead of his Joe Gibbs Racing teammate.

Sprint Cup regular Larson, who led 38 laps through the middle stages of the 300-miler, faded to an 11th-place finish in the Chip Ganassi Racing No. 42 Chevrolet.

The series' next race is the Fitzgerald Glider Kits 300, scheduled next Saturday (12:30 p.m. ET, FS1, PRN, SiriusXM) at Bristol Motor Speedway. It will mark the series' first use of heats and a main event as part of the Dash 4 Cash bonus program.

“Good calls from the pit box for sure. Chris Gayle (crew chief), he got his money’s worth tonight, he had to work on this thing for me and make it better all night long. The NOS Energy Drink Camry had speed, but there through the middle part of the race, Erik Jones caught me and when (Kyle) Larson was ahead of me at that point. We fine-tuned and worked on our balance a little bit, but overall, this is so good and cool for these guys. I appreciate everyone at JGR’s (Joe Gibbs Racing) XFINITY shop, JGR engines, Toyota, again NOS Energy Drink and XFINITY and the fans. We appreciate everyone pulling for us and what we were able to do."

What means the most to you with what you’ve experienced with the JGR XFINITY Series this year?

“I think just working with this group of guys, I think some people a few years ago wrote Chris Gayle (crew chief) off. We worked together last year and won races. To come out as strong as we have this year, this could have been five in a row. Certainly we’ve had a great season and he’s a great leader. The guys have done a great job following him doing what we’re doing. It’s pretty good, it means a lot. There’s still more races to go this year. Everybody gets a break from Kyle at Richmond, but I still have one more next week at Bristol. We’ll see how the heat races go. We’ll see what’s in store there. I don’t know if I get a cookie or what. I’ve won a Truck race, a Cup race and an XFINITY race all three in a row. I want a cookie right now."

How does it feel to now have eight cowboy hats from Texas?

“I guess you have a spare one for every day of the week. It certainly is a good problem to have. We’ve had some really good runs here over the years and we’ve been really fast. This NOS Energy Drink Camry was great. We got our money’s worth out of it and (Chris) Gayle (crew chief) got his money’s worth out of it, too on the pit box today. We had to make some adjustments to it and fine tune on it to make it better and better. Real proud of the effort and all the guys on the A team, the B team – they did a great job and to win, that’s what we’re here to do."

What does it feel like to win 80 NASCAR XFINITY Series wins in your career?

“Jimmie Johnson has 77 Cup wins, right. There’s time for me to be able to continue on and get more of those down the road. We’ll do what we can while I’m still here running XFINITY with Joe Gibbs."

What’s it like to win three different series races in seven days?

“I wouldn’t say it’s easy, but it’s certainly rewarding. Definitely being able to accomplish the things we’ve accomplished over the last seven days. Being able to score two victories at Martinsville and then to come here in Texas and get it done in the very next race, that’s what we look for and that’s what we are here for. I think each and every event we enter, that’s what we try to win and try to do what we can and hopefully we can again tomorrow with our Interstate Batteries Camry. I feel like our car is pretty good, could be a tick better, but we had tonight to fix it."

Do you feel like running the XFINITY Series race gives you an advantage over those that did not compete in it?

“I learned a few things, I always do. This tire is a little bit different than the Cup tire, but really close. Just kind of learned how it challenged the car and me throughout the run, from the beginning side of the run to the middle to the end, the car was kind of moving around and what lanes to move into to get some good speed and that. I never really ventured too high to run the wall, I did find some ways and techniques to get my car moving around the middle of the race track."

What has your team found to win so many races this early in the season?

“This is my first win here at Texas Motor Speedway, but obviously we’ve been on a roll to start this year. I think basically the two off weeks that we had, we talked a little bit about it, we’ve been good on the short runs all year long, but our long run had been kind of off. That was going into tonight that I wanted to be really good. I wanted to try to have a good long run car and thankfully we were able to do that tonight."

Does winning ever get old for you at Texas?

“Let me say this, we love coming here. It’s a great sport complex and a lot of our sponsors (are here) – it’s a huge deal for us. We love coming to Dallas, I think it’s a premier complex stadium, we appreciate what (Bruton) Smith has done here. We have a lot of friends down here."

How were you able to recover from your pit road penalty and finish second?

“It definitely didn’t help by any means, but it’s not fun to run second overall. A good day for us. We definitely felt like we had the car that could do it today. That penalty kind of put us back where it got hard to make adjustments on it and keep up with the track. A good GameStop Turtle Beach Camry. Thanks to those guys for coming on this week. We just need to be that much better. We’ll try to do it again next week."

“It was a good run for us overall and a solid day. Obviously didn’t have enough at the end. Some of that was from having to come back through the field and being able to keep up with the race track. That penalty wasn’t the reason we ran second by any means. We just need to do a little bit better job adjusting late in the race. We were able to get around him on our second or third run there and then got the penalty. A really good car overall. We made a nice adjustment there. I didn’t think we were going to be anywhere close and got it where it needed to be. Second isn’t where we want to be, we want to be able to beat the 18 (Kyle Busch) one of these days. We’re definitely the closest we have been."

How did the track change during the race?

Are you frustrated or feel like Kyle Busch is standing in your way?

“Yeah, it is. Fortunately in a way I didn’t have to race against Kyle (Busch) in the XFINITY Series at all and now this year obviously he’s back and he’s the man to beat and in old form again. It’s not frustrating, I respect what he does, I appreciate his ability and I think it just makes us want it more and it will be gratifying the day we can do it. We’re looking forward to the day we can do it and I feel like we can do it this year at some point. I thought this was going to be our night at a couple points in the race, but it just didn’t pan out."