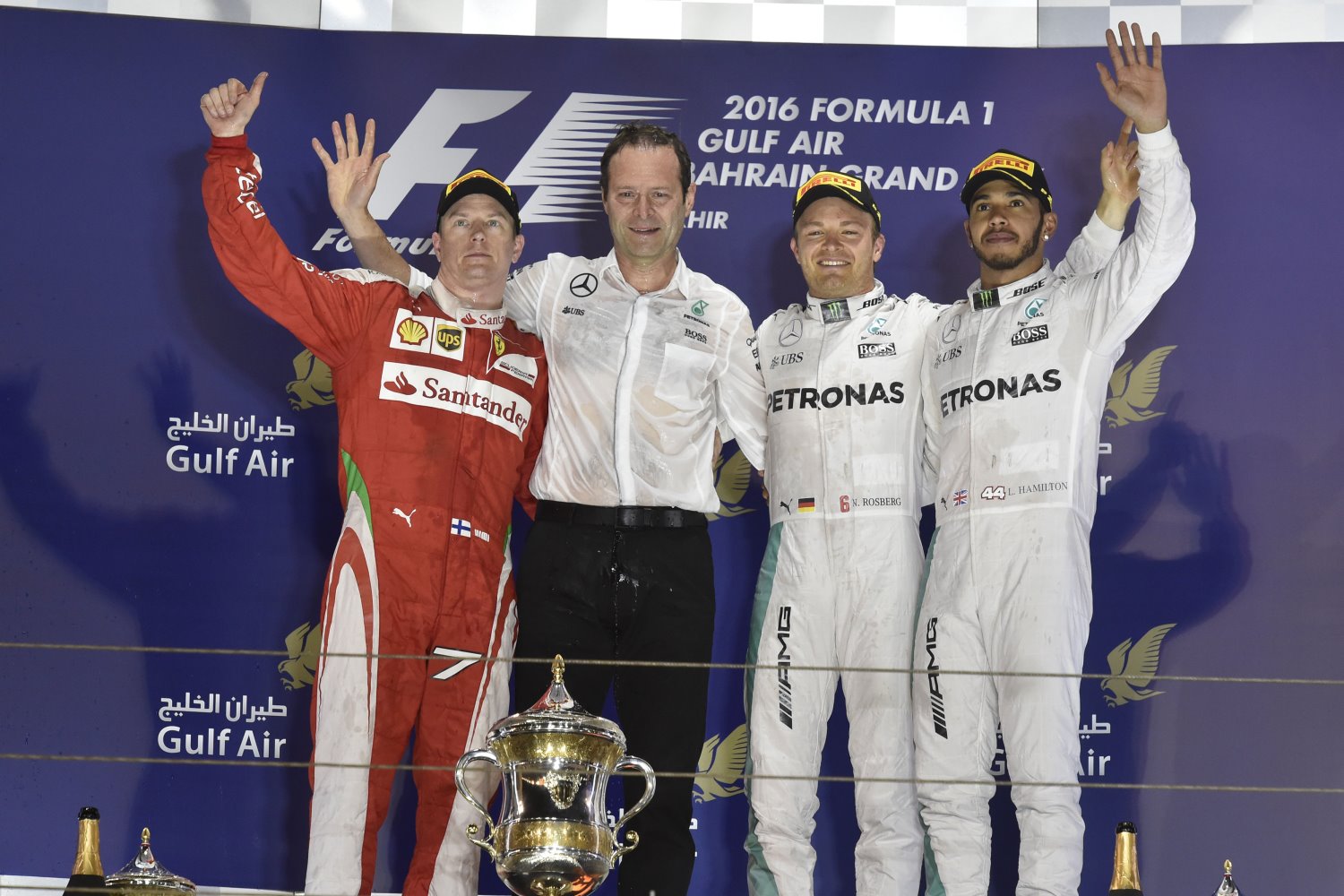 Q: Congratulations, your 16th victory, your fifth in a row. Any man that has done that has won a world championship, so a good day in the office.

Nico Rosberg: Oh for sure. It’s been an awesome weekend. The key was really the start. I got a great getaway and from then on I was trying to control the pace. Very, very happy with today; absolutely awesome to get another win.

Q: Fantastic, we’ll come back to you. I’ll move along to Kimi Raikkonen. Kimi, as was mentioned in the introductions, your fifth second place here, you were second here last year. It’s a good circuit for you. Just lacking that last little bit of pace this afternoon but it bodes well for the season?

Kimi Raikkonen: Yeah, obviously not too bad. I made a bad start and after a few laps we were one straight behind Nico, so it’s pretty difficult to recover from there, but we did what we could and we had pretty good speed. Not enough to win, but we’ll take second today and try to improve from there.

Q: What is it about this circuit that brings out the best in you? You do seem to have a good run here.

KR: I don’t think there are any special things we do. It seems to be happening here. There’s maybe some circuits that we seem to have all the time bad luck. But I’ll take it, but still we know… it was unfortunate for the team that the other car had an issue. We have some work to be done.

Q: Congratulations on your podium result. Ladies and gentlemen, Lewis Hamilton. Now Lewis, it seemed to me that it all went wrong at the start again. We saw a little hiccup in Melbourne, another little hiccup here, any relation or two separate incidents?

Lewis Hamilton: I think two separate incidents, but both equally as painful, perhaps this one today more painful. Nonetheless, we still managed to get back up there and at least get some points. So again, damage limitation. Congratulations to Nico, kind of an easy race for him I assume, but I’m glad that it wasn’t more points and obviously I could have not finished the race so…

Q: Just tell us about that last pit stop. It seemed like you stayed out a bit longer. You were give seconds behind Kimi at one point and then you dropped to more than 12 seconds, so what was the thinking behind that?

LH: Well, the team was hoping that was potentially a safety car or something. I had so much damage on the car that I couldn’t keep up with Kimi. I was fighting but the rear end was nowhere. I did what I could with it and at the end I was just keeping the tires in case I get an opportunity with the safety car, but it didn’t come.

Q: We saw you arriving this morning in traditional dress. You obviously love being here in Bahrain.

LH: I do and as you can see… a big thank you to the fans that came here this weekend. I’ve got some incredible support here. I was trying to enjoy the festivities here and I’ve been so well taken care of, so a big thanks to the Crown Prince and I look forward to coming back next year.

Q: Congratulations. Back to our race winner: what a dream start to this season. Do you want to share a few more thoughts with the race fans out there?

NR: No, just congratulations to Bahrain really, for staging such an awesome race weekend here. Such a great race track here also, in the desert. It’s been, I think, fantastic for all of you, I’m sure you had a lot of fun and we’ll be back again next year of course.

NR: Yeah, we’ve been working a lot on the starts. I’m pleased that it worked out so well, it was a really good getaway on the dirty side of the grid and that really made my race in the end. And from then on the car was feeling great and just controlling the pace and playing it safe. That’s what we were trying to do. Also, in case the Safety Car comes and things like that. So we really went for the safest strategy, not the fastest strategy. Just to cover all eventualities.

Q: So you anticipated maybe running supersofts later in the race?

NR: Anticipated? No. As I say, went for the strategy which was safest, to cover all eventualities like Safety Car or anything else that can happen.

Q: Kimi, just over six seconds behind at the end. If you reflect on where you were coming out of Turn Two on the opening lap, do you think with a cleaner start you might have been able to give Nico a run for his money today?

KR: It’s not possible to say. Obviously this is the end result and we had pretty okay speed in the race. Obviously bad start, I don’t know exactly what happened, if I had some issue or did some mistake. I just got wheelspin in the end. Obviously got surprised, managed to hold quite a good position after such a bad start, so it was a nice thing in the first two corners, didn’t lose too much. Then managed to pass cars, so that was a key point – but once I was second place I was already one full straight behind Nico so, obviously not an awful lot to do after that – but we managed to catch up little-by-little and I think we did the maximum that we could after that start. Not ideal for the team. We had some issue with the other car before the race even started, so yeah, we have quite a bit of work to be done – but the speed is more or less there and we just need to fix certain things.

Q: Lewis, another recovery drive two weeks after Melbourne. Obviously this one a bit more difficult I imagine because you seemed to have quite a bit of damage on the car. How did that feel to you, trying to make your way through the field? Maybe you could give us a little detail on the start and that first corner with Bottas.

LH: Yeah, obviously I just lost a lot of performance with the car and I’m not quite sure what happened at Turn One – whoever was on the inside was in my blind spot so I didn’t see them. It was a racing incident – those kind of things happen. After that just trying to manage the tires, obviously with a lot less rear end and trying to get as many points as possible. I did the best I could with it.

Q: (Khodr Rawi – motorsport.com) Kimi, are you worried that the latest reliability issues could prevent Ferrari from fighting for the championship?

KR: I don’t know what happened to the other car. Obviously something went wrong. We had some issue… I had an issue in the last race. Seb had something here. It’s not ideal but, like I said, we have some work to be done and you never want to have a retirement and it’s going to cost points in the drivers’ plus the teams’. It’s an unfortunate part of the game.

Q: (Christopher Joseph – Chicane) Nico, how important is it now, confidence-wise and momentum-wise for you, having won the first two races of the season?

NR: It’s not something I think about. I’m just taking it race by race and it’s great to win here today, great to win two on the trot and that’s it. Next race – where are we going, China? It is a good moment because we have a good car and I just want to make the most of it.

Q: (Heikki Kulta – Turun Sanomat) Kimi, you have eight podiums here. If you could, would you like to change it to one victory, and how do you rate your record?

KR: Obviously we always try to do our maximum and this is the end result. There’s no point in wondering if and… We had some second places, some third places, no win but like today I take second place and go from here and see what happens.

Q: (Michael Schmidt – Auto, Motor und Sport) Lewis, had there been a problem at the getaway, at the start, and then when did you realize that Bottas was too late on the brakes and you could be in trouble?

LH: I don’t really know what was at the start. I don’t think there was any particular real issue. I think it was just not a good getaway by myself and nothing technical or anything like that. Yeah, as I said, it was in a blind spot, I didn’t know if anyone was there, I didn’t know what had happened but I’m glad that I didn’t spin. At least I could keep going. At least I managed to continue and still have some performance left in the car that I could get back into the top three.

Q: (Heikki Kulta – Turun Sanomat) Nico, how does it feel to win five victories in a row?

NR: It’s not something that I think about. I haven’t thought about it right in this moment. I’m just thinking about the season, it’s two wins in a row now, good points, that’s where my focus is and that’s it really. Five wins, three wins in a row, it doesn’t make a difference. Sorry.

Q: (Khodr Rawi – motorsport.com) Lewis, did you have to run a more aggressive mode during the race to compensate for the lack of downforce?

LH: We just run the normal race mode, we don’t have any more… We just did the same as we normally do.