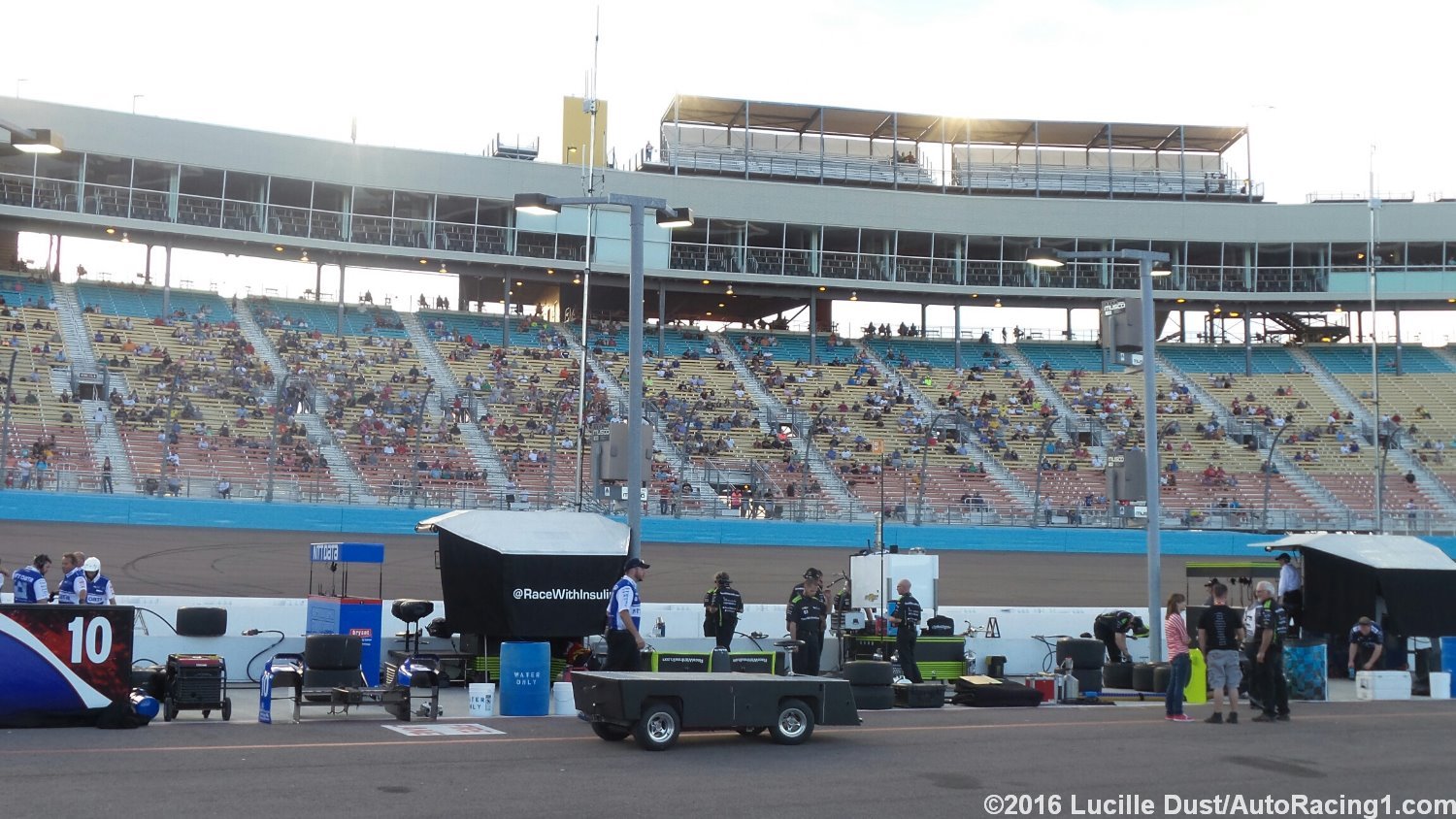 With Easter this past weekend, it was a rare weekend without any major racing series on track. However, this coming weekend a full slate awaits motor racing fans as NASCAR, Formula One, IndyCar, Formula E, the NHRA and a host of others will return to action.

And for me there is no question which series has the biggest weekend ahead of it: the Verizon IndyCar Series. Yes, this weekend's much-anticipated return to Phoenix International Raceway, is in my opinion is the series' most important non-Indy 500 race in years.

Kanaan and Helio Castroneves will be the only former Phoenix winners in Saturday evening's 62nd American Championship Racing event and first since 2005.

Exactly what relevance this history will play in engaging meaningful local support and the sustainability of the event going forward remains to be seen. Of course, whether the venue is rich with IndyCar tradition (Milwaukee) or relatively new on the scene (Auto Club Speedway); whether the racing is breathtaking (again, Auto Club) or more processional, INDYCAR has struggled mightily in recent seasons to maintain viable oval events. Since unification of the two series in 2008 the carnage of list of discontinued oval events reads:

*The 2011 Motegi race was run on the road course after damage to the oval sustained in the tsunami. However, the event discontinued after that season.

[adinserter name="GOOGLE AD"]Granted, the list of road and street course events removed from the calendar isn't exactly short either. Still, with only five oval races on the 2016 calendar and Pocono a year-to-year question mark, IndyCar oval races are becoming something of an endangered species. While I am not suggesting that the series should be a majority-oval discipline, ovals are crucial in differentiating the IndyCar Series as a unique racing discipline An IndyCar Series with 2-3 ovals and 12 road and street course races is GP 1.5 with the Indy 500.

Therefore, maintaining at least a third-40% of oval tracks is not merely desired, it is a MUST. And with so many failures in recent years at oval tracks making Phoenix work is vital in the series maintaining a presence on ovals. Also, if there is any track that is going to work, one would have to argue Phoenix given its history and layout would top that list.

Thus, the stakes are high for the series' foray into the Valley of the Sun this weekend. Although expectations should be muted for the first-year event, a safe and entertaining race Saturday evening combined with a positive take away about the event going forward is not merely desired. It is imperative.

I was originally in the minority regarding the new Formula One qualifying, believing they were not as complicated as many indicated and that the format would increase excitement throughout the course of the session. Judging by the recent Australian Grand Prix, I was dead wrong. You saw what happened, and there is no need to repeat it here. As F1 commercial chief Bernie Ecclestone characteristically noted it was "pretty crap."

Crap though it was, the new qualifying format will once again be utilized this weekend in Bahrain, surely accompanied by more drama and haggling over the new rules. However, this drama seems to be merely symptomatic of the problems in Formula One at the moment.

Of course, it was the F1 Strategy Group that agreed to this change, we just don't know how exactly they arrived at it. Remember, the Strategy Group is composed of:

Also, because the teams expressed dismay over the format it would be easy to presume it was shoved down their throats. It was, sort of.

"Two proposals were on the table," said Mercedes's Team Principal Toto Wolff. "One was the reverse grid idea and the other was this one. We voted for the least worst solution. You can't say no, no, no, all the time, so this time we felt maybe it's worth exploring and see how it is."

So, if we are to take Wolff at his word, the new format was the lesser of two evils, and the one Mercedes vote for. The previous format, to which I don't recall any strong objection, was apparently, not an option. Therefore, the only two options on the ballot were two scenarios (reverse grid and format we saw in Melbourne) which would inevitably produce an outcry. Why?

Of course, with this qualifying charade as a backdrop following the Melbourne weekend, the Grand Prix Drivers Association penned a letter to the sport's stakeholders calling for "a restructuring" of the "obsolete" governance of the sport. The letter was praised by some in the F1 media as the drivers taking a strong stand, but in reality the letter was very generic, and made no specific mention of the reforms it sought.

As you might imagine, Ecclestone responded to the GPDA letter with his trademark snark. The octogenarian started the letter agreeing with the GPDA in that the sport needs reform but also noted that it was "easy to analyze what is wrong." He then noted his more than fifty years being involved in F1 before closing the letter saying:

"You state that every individual acts with the best intentions. I am not sure if this is a misprint. If not, it should read ‘with their very best intentions'."

There are a number of ways one can interpret Ecclestone's message. But the general takeaway is that with disputes over the qualifying format, disagreement over engine regulations, dissatisfaction amongst constituents regarding who controls Formula One, and a general lack of direction for the sport, Formula One is a house divided.

Further, it's a house divided, in which Ecclestone seems unwillingly to cede more ground. And while he's the first to admit the new qualifying system is a dud, he doesn't seem to be in a hurry to get rid of it either. Could it be that Ecclestone is using qualifying to somehow put the screws to the teams in another of his master plots?

I'm not ready to go that far. But the reasoning behind the change is curious and we do know there is always some method behind Bernie's madness. This leads me to think there is much more behind this qualifying change than meets the eye.

I know Ecclestone is a master of driving up the prices on race organizers by creating at least the illusion of other bidders to host Grand Prix. While the back and forth with Monza has gone on seemingly forever, I don't for a second buy the notion Ecclestone is ready to replace Monza with Las Vegas. If there is a second American Grand Prix venue, I doubt it will be in Vegas.

Kyle Larson was one lucky individual two weeks ago at Auto Club Speedway. The young Californian had a vicious impact with the SAFER Barrier on the inside backstretch and walked away shaken but none the worse for wear. Keep in mind, after Kyle Busch's crash at Daytona last year there was a concerted effort by many tracks to increase the amount of SAFER Barriers at their tracks. This was the first NASCAR race at ACS with the SAFER Barrier on the inside wall.

I've written previously that the SAFER Barrier covering every inch of every track is not an economic reality as some might suggest. It is however as we saw with Larson a luxury that should not be taken for granted.

Granted, this hasn't shown up in the television ratings, which has to be a concern in Daytona Beach. Nonetheless, in my opinion, the opening five races of the 2016 NASCAR Sprint Cup Series have from an entertainment standpoint been a significant upgrade over prior seasons. I hope other series are taking note that less downforce = better racing.

I will be in Phoenix handling AutoRacing1's coverage of the IndyCar race, so that is where the majority of my focus will be. Formula E, of course, will be in Long Beach for the sixth race of the 2015-2016 season. Interestingly, the presence of Formula E in Long Beach with Formula Drifting the following weekend and the Toyota Grand Prix of Long Beach in two weeks, means the Long Beach event now spans three weekends.

As for the racing itself, my eyes will be on Renault e.dams driver Sebastien Buemi. While Buemi has had the best car nearly all season, he has been incredibly mistake prone and hasn't shown the temperament one would associate with a championship-level driver. Going forward, will Buemi avoid the self-implosions that have plagued his recent races? Or will more hot-headed driving result in a squandered championship?

Brian Carroccio is a senior columnist for AutoRacing1 and credentialed member of the Verizon IndyCar Series and NASCAR Sprint Cup Series media. He can be contacted at BrianC@AutoRacing1.com