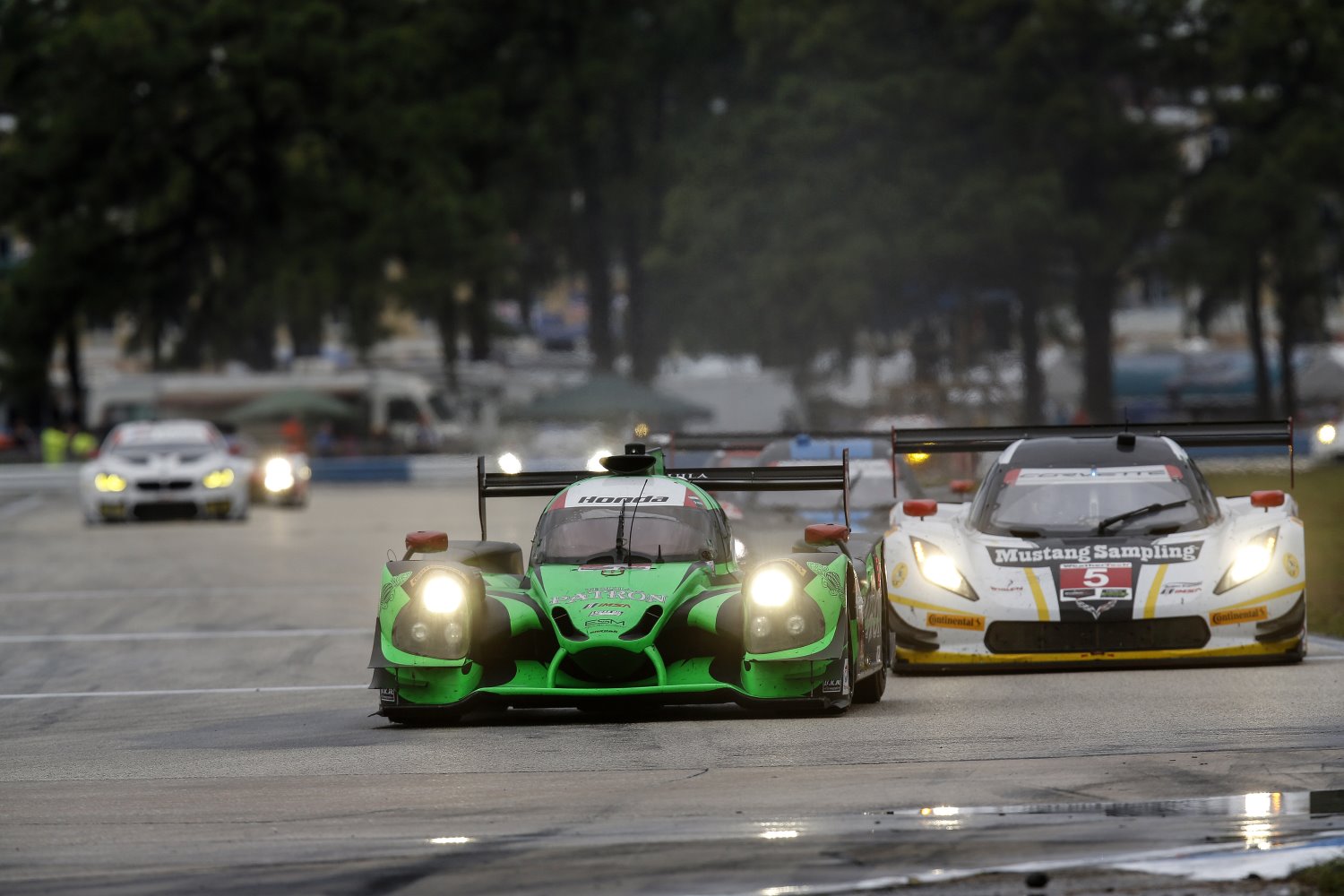 DAYTONA BEACH, Fla. — Rough tracks have been tough on the ultra-lightweight DeltaWing, and they don’t come much rougher than Sebring. So watching the DeltaWing march through the Twelve Hours with minor complications was encouraging for the team, often running in the top eight and as high as fourth.

Then it all came to an abrupt end. The team pitted with 25 minutes remaining, and with Andy Meyrick behind the wheel, returned to the track in eighth position.

"With 17 minutes left and during a full course caution, I was running a normal line at normal speed into Turn 1 and at the apex, the steering locked up and snapped. Fortunately, I didn't hit anything but I couldn't bring the car back, since the steering was broken," he said.

"It's a real shame. I'm very disappointed not to finish but I'm really impressed with what the team has done to get this far. To be in a position to finish on the lead lap here at Sebring — a circuit that is not a strong one for the car — is a testament to everyone's efforts and it bodes well for the rest of the season."

[adinserter name="GOOGLE AD"]MAZDAS MAKE PROGRESS: As they begin their third year in IMSA WeatherTech SportsCar Championship Prototype competition, Mazda is making headway, now that they have replaced the developmental diesel engines from the past two seasons with 2.0-liter gasoline-powered engines.

The team placed both cars in the top 10 for the first time, and the No. 55’s sixth-place finish matches the team’s best result. Drivers Tristan Nunez, Jonathan Bomarito and Spencer Pigot finished on the lead lap, and the No. 70 Mazda was the first car one lap behind to finish eighth overall with drivers Tom Long, Joel Miller, Ben Devlin and Keiko Ihara. The Japanese driver Ihara, formerly a Nissan driver, made her first start with the team.

"It was pretty crazy race out there," said Pigot, who hails from nearby Orlando. "Lots of drama and excitement all through the race. It was cool to have my first experience in this race with Mazda. I went through quite a bit of everything from wet to dry, from day to night. I definitely got to experience it all. Very happy to be a part of this group and hopefully I’ll be back for more."

PRUETT’S LAST PROTOTYPE RUN? After five career Rolex Series DP titles — in 2004, 2008, 2010-12, all for Chip Ganassi Racing with Felix Sabates — Scott Pruett’s run in the No. 31 Whelen Action Express Chevrolet Corvette DP at Sebring may be his last in a Prototype, he said.

JOB TEAM FALLS SHORT: It was a good weekend for Porsche team owner Alex Job in that Alex Job Racing was inducted into the Sebring Hall of Fame. But Job’s quest for an 11th title came up short, as AJR’s two cars finished fourth in class (the No. 23 Heart of Racing car) and fifth (the No. 22 WeatherTech entry.) Both cars were competitive all day, and finished on the lead lap.

None of the GT Daytona entries, though, could match the speed of the class-winning Scuderia Corsa No. 63 Ferrari 488 GT3 of Jeff Segal, Alessandro Balzan and Christina Nielsen, which had a best lap of 2:02.810, nearly a half-second faster than the next quickest GTD car.

ROCK THE GRID: The Friday night concert featuring multi-platinum recording artist B.o.B, joined by Leroy Sanchez, Baby Bash and Brad Tallman, was, by all accounts, a success, and IMSA officials said there’s a chance we could see more pre-race concerts.

Rock the Grid was the vision of IMSA racer and team owner Jim Jonsin of Rebel Rock Racing. Jonsin is a Grammy Award-winning music producer whose credits include hits for Lil Wayne, Beyonce, Usher, T.I., Pitbull and Eminem. The concert was presented by Continental Tire, VP Racing Fuels, Rebel Rock Entertainment and IMSA.

Jonsin might have wished for a little more luck for his Rebel Rock entry in Friday’s Continental Tire SportsCar Challenge Sebring 150 race, though — the ST Porsche 997 Jonsin shares with Frank Depew and Elliott Skeer ended up 30th in the 35-car field.

The next race for the Continental Tire SportsCar Challenge series is April 29-30 a Mazda Raceway Laguna Seca in California.

[adinserter name="GOOGLE AD"]SURPRISE SUCCESS: With only one test before the Sebring race to shake down its new-to-them BMW Riley DP, Tampa-based Alegra Motorsports also had a four-driver lineup, of which only one had driven a Prototype before. Yet at the halfway mark, the No. 24 car with team owner-driver Carlos de Quesada, Cameron Lawrence, Daniel Morad and the most experienced of the team, Dominik Farnbacher was in third place and faster than the leader.

Electrical problems sidelined the car putting it 43 laps down, but it was running at the end, and de Quesada says they will be back for the final two Tequila Patron North American Endurance Cup races at Sahlen's Six Hours of the Glen at Watkins Glen International on June 30-July 3, and the Petit Le Mans at Road Atlanta Sept. 28-Oct. 1.

SPEAKING OF THE TEQUILA PATRON ENDURANCE CUP: In this separate championship consisting of performance at the four longest races, you’d figure that in Prototype, the No. 2 Tequila Patron ESM Honda-Ligier JS P2 would be in the lead, since they won both the Rolex 12 Hours at Daytona and the Mobil 1 Twelve Hours of Sebring. And they are, but they are tied in points with the Action Express Mustang Sampling No. 5 Corvette DP, since points are awarded not just for the finish, but for where the car is during certain points of the race.

In GT Le Mans, the No. 4 Corvette Racing C7.R took both races, and they are one point ahead of second place. In Prototype Challenge, the No. 52 Pr1/Mathiasen team is in the TPNAEC lead, and in GT Le Mans, it’s a tie between the No. 23 Alex Job Racing Team Seattle Porsche 911 GT3 R team, and the No. 44 Magnus Racing Audi R8 LMS GT3.