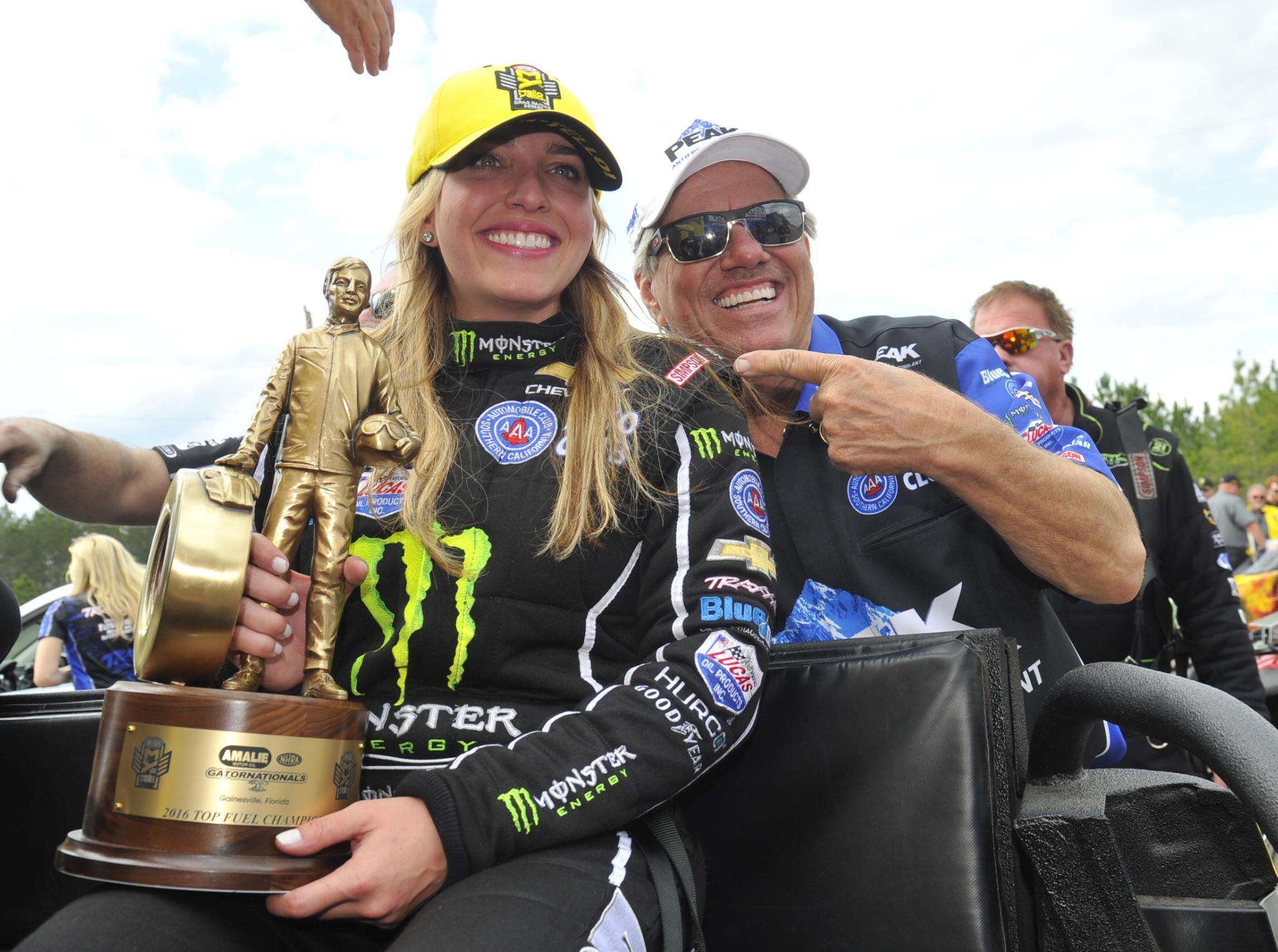 Force powered her Monster Energy dragster to a 3.772-second run at 318.77 mph to outlast Terry McMillen’s 3.981 at 266.90 in his Amalie Motor Oil Xtermigator dragster. This was Force’s eighth career final-round appearance and first ever at Gainesville Raceway. After also racing to the finals three weeks ago in Phoenix, Force became the first female Top Fuel racer to appear in back-to-back finals since Melanie Troxel in 2006. As the No. 5 qualifier, Force defeated Morgan Lucas, Tripp Tatum, and Dave Connolly before beating McMillen in the final.

“It feels good to finally bring home the win," said Force, daughter of 16-time Funny Car champion John. “Our car was on fire all weekend. It went down there and had great runs. This is a very proud moment for me and the John Force Racing team, the Monster Energy team. It took everyone to get us here."

McMillen, appearing in his first ever final round, sped past defending world champ Antron Brown, eight-time world champ Tony Schumacher, and Clay Millican before having engine problems in the final against Force. McMillen jumped from 10th to fifth in points.

[adinserter name="GOOGLE AD"]Leah Pritchett raced to victory in Phoenix three weeks ago, and with Force’s victory in Gainesville, this is the first time since 1990 that female Top Fuel racers have won back-to-back events.

Pritchett’s Phoenix win was also the first of her career, so Gainesville marks the first time there have been back-to-back first-time Top Fuel winners since 1993.

John Force Racing doubled up for the first time in team history as Hight pushed his Auto Club Chevrolet Camaro SS Funny Car to a 4.429 at 280.95, outrunning Ron Capps’ 7.047 at 89.05 in his NAPA Auto Parts Dodge Charger R/T. This is Hight’s first win in 2016 and third in Gainesville. He qualified third and beat Terry Haddock, Matt Hagan, and Chad Head en route to earning his 37th career win. Hight leads the Funny Car points.

“We’ve had a great race car the first two races, so we actually felt that we let a couple slip by that we actually could have won," Hight said. “To come in here and actually get it done, and get it done with Brittany, both of us leaving with the points lead, man, it doesn’t get any better than this. It’s been a lot of hard work, and it’s finally paying off."

In Pro Stock, Anderson raced his Summit Racing Equipment Chevrolet Camaro to a holeshot win against Ken Black Racing teammate and points leader Jason Line. Anderson posted a 6.590 at 210.01 and used a quicker reaction time to cross the finish line before his teammate, who powered his Summit Racing Equipment Chevrolet Camaro to a 6.581 at 210.57. Anderson raced past V. Gaines, Jeg Coughlin Jr., and Allen Johnson in the earlier rounds. The KB Racing duo of Anderson and Line has combined to win the first three Pro Stock events this year.

“The whole weekend was great for KB Racing," Anderson said. “These races are not decided on paper, they’re decided on the racetrack every time. We are human, and things happen different on the starting line. Somehow, I overachieved in the final and stole a victory from Jason. Good for me, but it’s still great for KB Racing. No matter what had happened in the final round, it was a victory for the team. I can’t be prouder of the race team I’m on."

Line, who won the last event in Phoenix, qualified first and had a first-round bye. He then defeated Vincent Nobile and 2015 rookie of the year Drew Skillman in the second and third rounds, respectively. Line has four victories in six final-round appearances in Gainesville. This is the second consecutive year Line has lost to Anderson in the final at the Amalie Motor Oil NHRA Gatornationals.

In Pro Stock Motorcycle, Krawiec rode his Screamin’ Eagle Vance & Hines Harley-Davidson to a 6.820 at 198.23 to defeat Hector Arana Sr.’s 6.920 at 196.44 on his Lucas Oil Buell. This marks Krawiec’s 32nd career win and his fourth victory at Gainesville Raceway. As the No. 1 qualifier, Krawiec outran Michael Phillips, Jerry Savoie, and teammate and world champion Andrew Hines to make it to the final.

“Going out there I had a great motorcycle," Krawiec said. “I have a great crew behind me, but the key thing for me was to not screw it up. You have the first-round jitters after four months of not racing, but I knew I had a fast motorcycle. We’re all really excited, everybody back at our shop. We’re glad one of our Harley-Davidsons got the win."

Smith’s late-model IDG Chevrolet Camaro powered to a performance of 5.829 seconds at 249.86 mph to hold off Rowe’s Agave Underground Tequila ’68 Chevy Camaro that raced a 5.869 at 233.76. It was Smith’s ninth victory and second at Gainesville Raceway. He was runner-up here in 2014.

Rowe, who qualified 15th, was looking for his fifth career victory and first in Gainesville. He defeated Robert Patrick Jr., Steve Matusek, and former Pro Stock driver Jonathan Gray in the earlier rounds. Rowe was runner-up behind Khalid alBalooshi here in 2011.

The Pro Mod Drag Racing Series returns April 29-May 1 at the NHRA SpringNationals at Royal Purple Raceway near Houston.