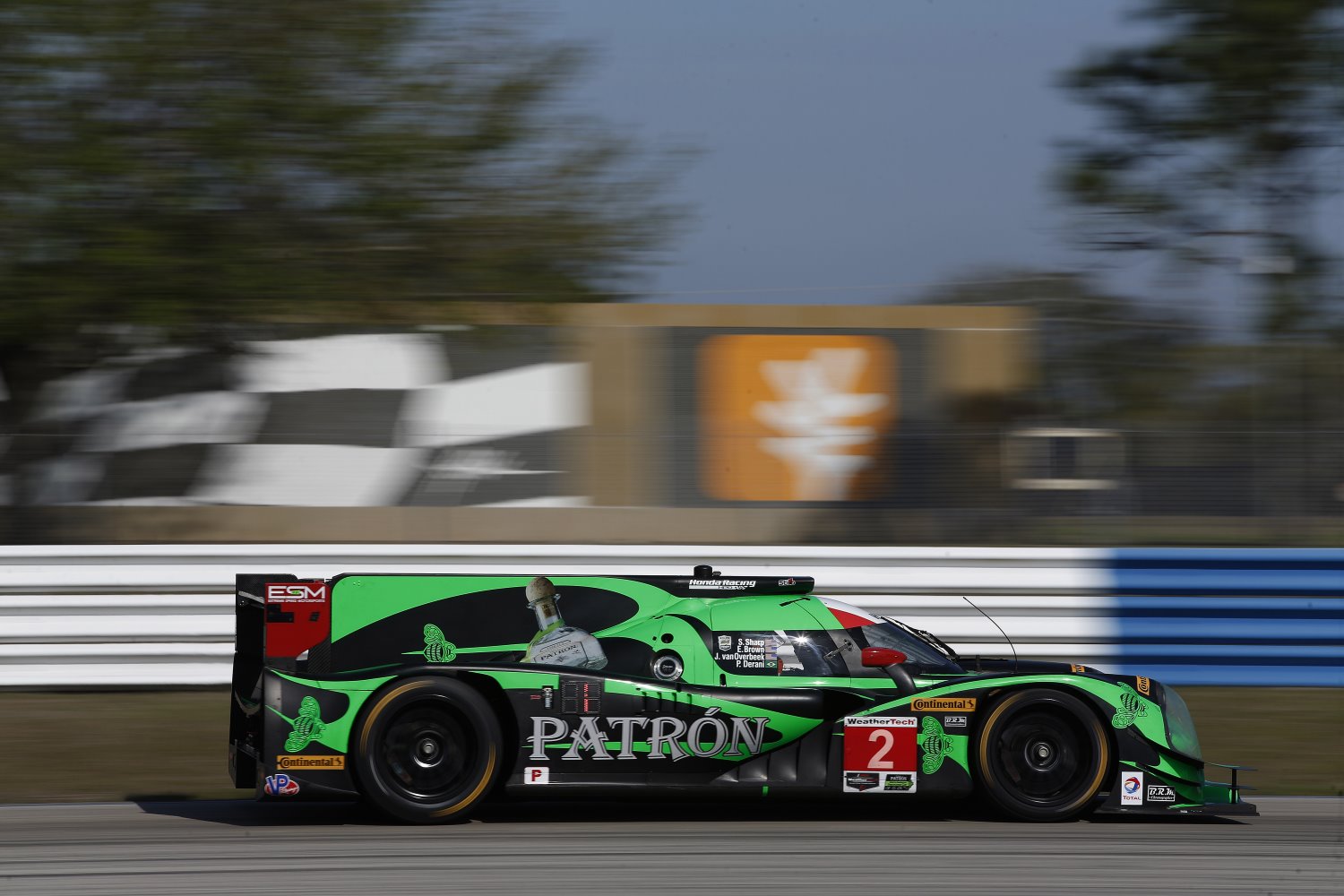 Once again, the 22-year-old driver from Brazil, Pipo Derani, passed three cars in the last 10 minutes of the race to take the victory for the No. 2 Tequila Patron ESM Honda HPD Ligier JS P2 – much like he did at the season-opening Rolex 24 At Daytona. But unlike Daytona, Sebring threw some extreme weather conditions at the young driver and his team, causing a lengthy delay and some brutal on-track conditions.

Before the IMSA WeatherTech SportsCar Championship season kickoff at Daytona, Derani, a factory driver for Ligier, was virtually unknown, until he steered the team of Scott Sharp, Johannes van Overbeek and PatrÂ¢n Spirits CEO Ed Brown to a win.

At Daytona, it seemed Derani could drive to the front at will. That didn't happen at Sebring until his last couple of stints, but the rough 3.740-mile track is a hard one to master. Plus, it was Derani's first time here. "It's a very difficult track to learn, with all the bumps and dips," he said.

Indeed, it looked like it would be an Action Express Corvette DP one-two finish until near the end, as a late caution period to pick up two crashed cars left just 13 minutes remaining in the race. Derani's team elected to get new tires and take fuel during the caution period, taking him from the lead to fourth place, as the Action Express cars didn't get new tires, and therefore had a quicker pit stop.

But with surgical precision, Derani moved to third, then second, then to the lead with just five minutes remaining when Dane Cameron in the No. 31 Action Express Whelen Corvette DP went too wide into Turn 7, leaving room on the inside for Derani. Cameron and co-drivers Eric Curran and Scott Pruett took second, and the team Corvette DP, the No. 5 Mustang Sampling entry with Filipe Albuquerque, Joao Barbosa and Christian Fittipaldi was third. Derani won by 2.926 seconds over Cameron.

"It was a tough day, a long day," Cameron said. "The pit strategy got us to the front, and we just tried to run away and hide. I think we executed well on pit lane, and the team worked together really, really well."

It's some consolation that the ESM PatrÂ¢n team isn't racing the whole season, and the No. 31 car is, "So it was a good points day for Dane and me," said Curran. Co-driver Scott Pruett signed on only for Daytona and Sebring.

In the GT Le Mans class, it was déjÃ  vu, too, as the Chevrolet Corvette C7.R team, which also won Daytona, took the victory at Sebring in the No. 4 car, driven by Oliver Gavin, Tommy Milner and Marcel Fassler.

The Corvette's team car, No. 3, didn't fare as well, finishing 36 laps down after a crash when driver Jan Magnussen hit the No. 911 Porsche 911 RSR of Kevin Estre in Turn 1, sending both cars into the fence. It was likely the most serious wreck of the day, but both drivers walked away.

Today, said Gavin, "showed the class and strength of Corvette Racing, dealing with all the different conditions thrown at us. It doesn't get any better than to win the first two races, but it's a long championship season."

Second in GTLM was the pole-winning No. 25 BMW Team RLL M6 GTLM of Bill Auberlen, Bruno Spengler and Dirk Werner, and third was the No. 912 Porsche 911 RSR of Earl Bamber, Michael Christensen and Fred Makowiecki.

In Prototype Challenge, the CORE autosport ORECA-Chevrolet of Colin Braun, Jon Bennett and Mark Wilkins won the class, followed by the No. 52 PR1/Mathiasen car with Tom Kimber-Smith, Robert Alon and Jose Gutierrez and in third, the No. 8 Starworks car with Alex Popow, Renger van der Zande, and David Heinemeier Hansson.

"This race is not easy to win – every time you think a race is going to be a walk in the park, it isn't," said Braun.

It was the first race for the Scuderia Corsa Ferrari 488 GT3, "and to come away with a win is great in the car's debut," Segal said. It was also significant for another reason: With Nielsen's victory, it is the first class win for a woman at Sebring since 2006, when Liz Halliday won in the P2 class.

Before the halfway mark, weather was a major factor for the teams. The day started with clear skies, but weather front crossing from the west to the east hit the historic Sebring International Raceway around noon, with everything from a drizzle to a downpour, and causing IMSA to stop the race for two hours and 15 minutes due to track conditions and lightning.

The race resumed at 4:08 p.m., and intermittent rain was a factor, but it did not match the earlier storms.

The heralded Sebring debut of the two Ford GT cars, competing in the GT Le Mans class, was in the end disappointing, but far better than their showing in Daytona. The No. 67 car ran well all day and finished fifth, and even led for a while with IndyCar champion Scott Dixon driving.

The No. 66 didn't fare was well after losing laps while fixing crash damage, and it finished eighth in class. Daytona and Sebring were the only two endurance races the team has for practice before they ship out to France, hoping to win the class at the 24 Hours of Le Mans, on the 50th anniversary of Ford's overall victory there.

Next up for the IMSA WeatherTech SportsCar Championship: The Bubba Burger Sports Car Grand Prix at Long Beach on April 16.

Scott Sharp
It's just an amazing day. Honestly, this day was so tumultuous, so up and down with all the weather. It caused havoc for all of us. We all persevered through it all. The team made some great strategy calls. We rolled the dice. I have to take my hat off to the Oak guys. At the end, both Ed and I didn't think we had a car that could win. I knew it was a top three car, but I didn't think we were going to be able to do it. Coming out 4th, I thought 3rd was probably the best we were going to get here. Pipo showed us we had more pace in the car than we thought we did.

Ed Brown
Man, what a day. The weather was crazy and we were really unsure of our car. But the team really pushed. It was crazy how the day changed. We went up and down and we sorted back. At that last yellow, I thought we'd get third, and that's a good day's work. Pipo drove the wheels off the car for the last 20 minutes. He's amazing. The team was great, and so was the strategy that Oak called. We rolled the ball. Pipo was out there for an hour and a half on slicks when everybody else was on rains. He was running better laps than those guys. It's pretty crazy. What a great way to start the year. It kind of spoils you because you win the first two biggest races in the US.

Johannes van Overbeek
Wow. The 36 Hours of Florida. ESM Patron has successfully won overall at both Daytona and Sebring. It was certainly our objective coming here, but so many things can happen. We had the red flag, crazy weather, but everything ran flawlessly. Thanks to Patron for allowing us to be here, and hats off to Pipo for driving one hell of a last stint.

Pipo Derani
What a tough race this was. Starting on the dry with a lot of sun, and suddenly a red flag because of a lot of rain. It was just too complicated and hard to believe we did it. We had some contact, some spins, and moving our way back to the front was just unbelievable. In the end, I knew we had a great car, and new tires. But with only 10 to 15 minutes to go and still be in 4th was difficult to believe that we were going to make it. God had an eye on me and everything I executed was perfect. I can't believe it all. It happened like that. I was so focused to bring the car home. The adrenaline was so high I couldn't think about anything else.

Hear from the four class winners (Prototype, Prototype Challenge, GT Le Mans and GT Daytona) at the 12 Hours of Sebring