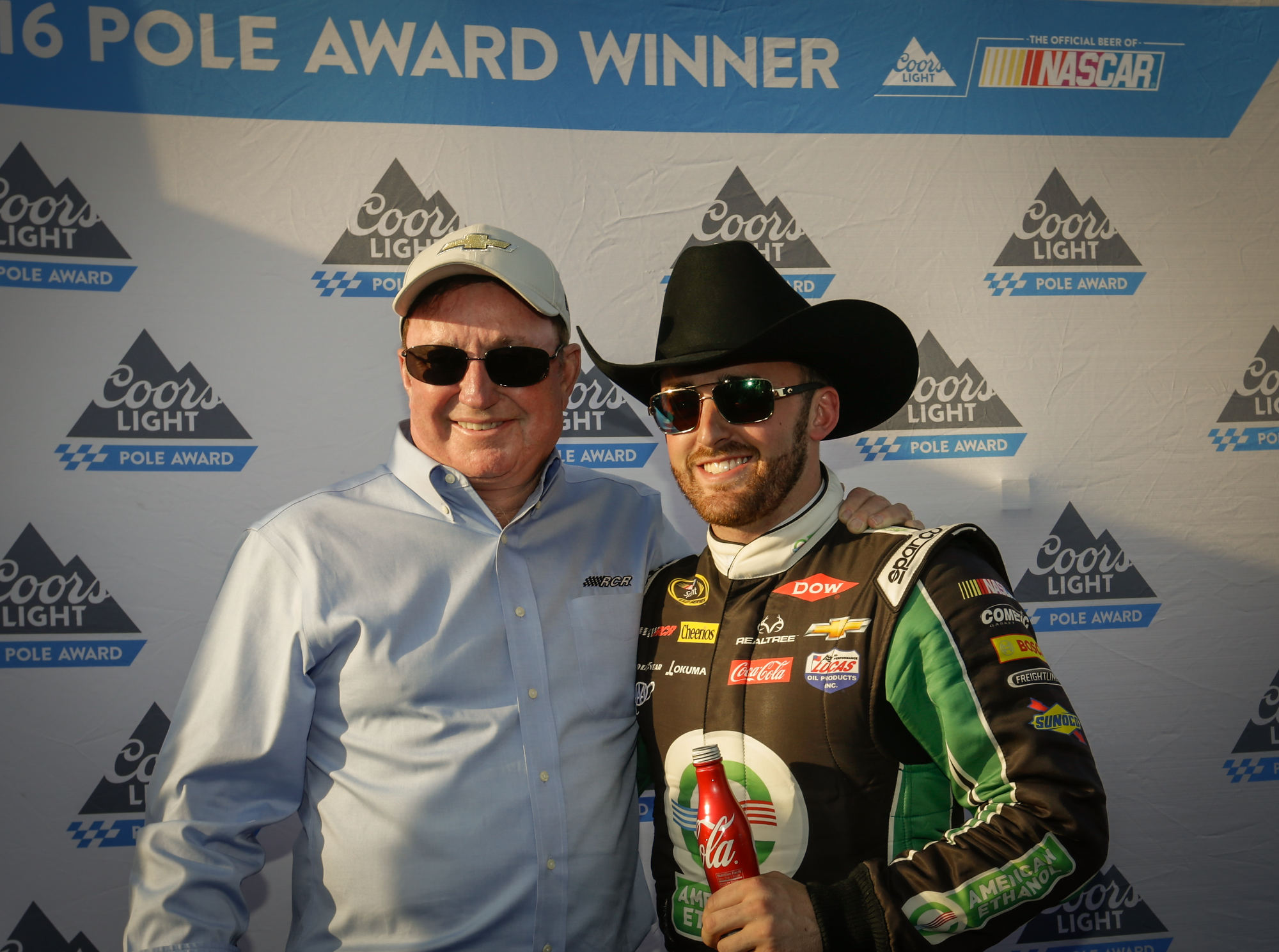 Kevin Harvick, who was last week’s race winner at the Phoenix stop on the West Coast Swing, was second quick in his No. 4 Jimmy John’s Chevrolet SS, putting Team Chevy on the front row for Sunday’s 200 lap, 400-mile race.

In the knock-out style format, Ryan Newman was the third fastest qualifier in his No. 31 Caterpillar Chevrolet SS. Chase Elliott was the fastest qualifying rookie with an eighth place effort in the No. 3 NAPA Auto Parts Chevy SS. Jamie McMurray was 10th in the order in his No. 1 McDonald’s Chevy SS.

All the action from Auto Club Speedway can be seen when the Auto Club 400 begins at 3:30 p.m. ET on Sunday March 20. Live coverage will be available on FOX, MRN Radio, Sirius NASCAR Radio Channel 90 and NASCAR.com.

[adinserter name="GOOGLE AD"]TELL US ABOUT THAT RUN:
"This means the world to me to get another pole. I had a pole and it was looming, it was Daytona, that one for kind of one for the guys. This one is too, I feel like I gave them a little bit more effort here. It’s a driver’s track at Fontana. You really can study and find different lines and move around and find speed. It makes our whole team feel really good going into Sunday. It feels like a career day for me to win a pole somewhere else other than Daytona."

BASED ON PRACTICE AND QUALIFYING HOW CONFIDENT WERE YOU THAT YOU WOULD BE ABLE TO SIT ON THE POLE TODAY?
"Well, actually after our first run I tried to save a little bit, but I didn’t want to save that much. Well, actually, my engineer told me we wanted to be from 13th to 24th in the first round, we were 13th. The car just didn’t feel as good as it had in practice. It felt a little tighter. We freed up the car a little bit and the second run went pretty well, still a little snug. Going into the third round I had never veered from our plan. Our line was the same the entire time and looking at where guys were gaining and losing to me. I was really good through (Turns) 3 and 4 and guys would gain a little bit on me into (Turn) 1. So, the final run I just kept my same game plan tried to stay really smooth on the throttle pedal and it worked out."

HOW CONFIDENT ARE YOU THAT YOU CAN TURN THAT POLE INTO A WIN?
"Well, obviously you see right there that we have a car that has some speed to it. Now we’ve got to see how far we can go with our car as far as lap speed into a run. I’m very confident in my guys that they will give me something to work with, they already have and the speed is there. Just focus on running that wall because that is where the race is going to be at I think in the long run, everybody is going to be running right by the wall. We will practice a lot up there and see if we can get our car to work on the bottom for a few laps then move all the way up."

FOR THE RACE YOU WILL CHANGE THE SET-UP OR KEEP IT LIKE IT IS?
"The core stuff will stay the same we will just try to make our car run lap times longer. We might not bust off that fast lap we just kind of want to stay consistent throughout a run. We will do whatever we can to just make our car hold on for a long period of time. We won’t change anything really core wise, but small things here and there adjustment wise."

TALK ABOUT YOUR SEASON TO THIS POINT AND ALSO LOOKING FORWARD WHO DO YOU THINK MAY HAVE THE BEST ADVANTAGE OVERALL WITH THIS NEW PACKAGE?
"I just think that we’ve done a good job as a group to make our team better. We still have work to do. This is the start of what we need to be doing as a group, as a company at RCR. I feel like our company has everything that all the other companies have and we have the drivers also. This is a start. We still have a lot of work to go so we will keep our head down. It definitely feels good to have a small moral victory right here. By the way Auto Club Speedway has the coolest pole trophy. I got a sweet door smasher. It was very cool to do that and I enjoyed it.

"Sorry I didn’t answer the end of your question. Who is the best right now as far as the package goes… I don’t know I think every team has shown a little bit of strength at certain tracks. Some weeks I say one team is good the next weekend another team is good. I think it’s been pretty even truthfully overall. As companies come and go, every manufacturer has won, it’s pretty tight out there. I think this package has done a good job to make the racing better."

DID YOU EXPECT YOU WERE GOING TO BE DOING SO WELL WITH THE NEW RULES PACKAGE?
"No, I just went to work. I figure everybody was going to have the same stuff as I’ve got and I’ve got to go out there and get better as a driver. We went to work. I have always had this drive as a driver to want to get better and to work hard. I think the right group of people is around me supporting me, showing me the right things to get better, pointing me in the right direction each time I come off the track somebody is talking to me on improving. Also, my engineers are doing a good job of not being satisfied with just good. Good isn’t good enough. That is making me a better driver. I enjoy the encouragement and the push from those guys."

HOW CLOSE DO YOU FEEL TO YOUR FIRST CUP WIN?
"I feel like we just got to keep doing our job and that day is going to come. The effort is being put in right now by all. I just want to keep working hard and have those opportunities. When that first one gets behind me you might see a totally different guy out there. I definitely know that. I feel like I’m not going to lose the fire, I’m just going to want everything. I’ve won an Xfinity Series, I’ve won a Truck Series, when you get that first one behind you everything just starts coming easier for you. Guys respect you, they know when you are coming, they know that you are there. We’ve got to break through that wall. We broke through a wall today by getting a pole, so we have a few more barriers we need to break down and then I feel like we will be one of the elite teams in NASCAR."

HOW DO YOU WORK THE STRATEGY OF TRYING TO BE FAST IN THAT FIRST ROUND, BUT NOT TOO FAST?
"It’s tough. You’ve just got to know where to give up the speed, I guess. There are small areas around the track that you can gain speed by being a little harder on the tires. For instance coming to the green a lot of these poles are won on your out lap coming to the green. For instance the first one I tried not to really scrub my tires that first one coming to the green and tried not to heat them up too much. Just certain areas of the track, it starts from when you leave pit road. You have to focus from there on and each run you can change a couple of things to gain or lose, just trying to keep some of that meat on the tires so they grip up for that last run."

HOW IS THE XFINITY CAR? COULD THIS BE A WEEKEND SWEEP FOR YOU?
"We have still got a little work to do over there. I think we’ve made it better from the last two weeks speed wise. I think the top of the leader board still shows the Gibbs cars have been tough. I thought Harvick had a good late run in that practice. There is still going to be a lot of strong competitors. We need to get a little bit better, but my confidence is up. My confidence is high, so we will work hard all day tomorrow."