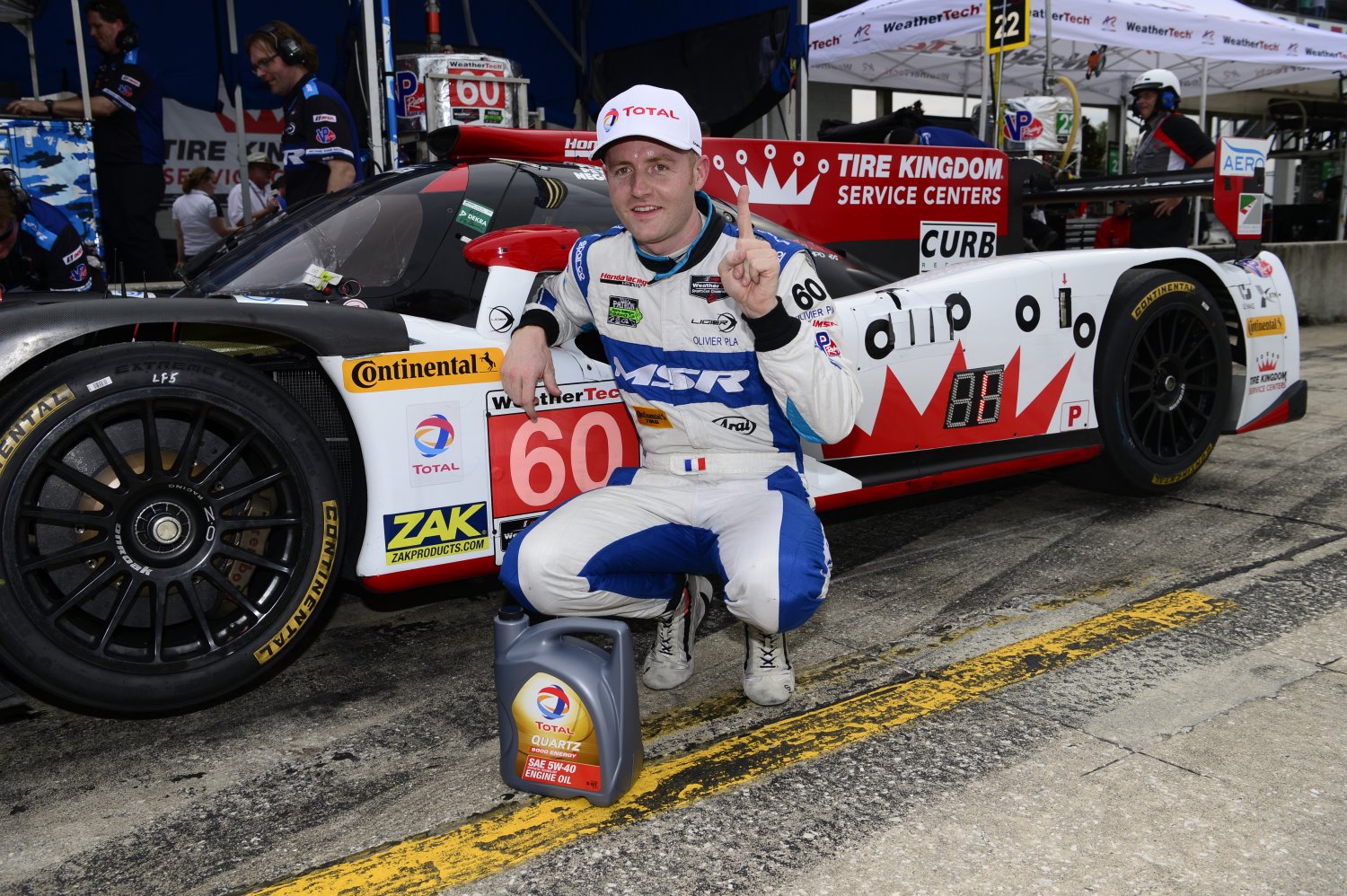 SEBRING, Fla. – For the second year in a row — albeit in a different car, and for a different team — Olivier Pla was the top qualifier Friday ahead of Saturday’s 64th Annual Mobil 1 Twelve Hours of Sebring Fueled by Fresh From Florida.

With a lap of 121.061 mph, Pla drove the No. 60 Michael Shank Racing Tire Kingdom Ligier JS P2 Honda to a 0.174-second advantage over runner-up Pipo Derani, in the Rolex 24 At Daytona-winning No. 2 Tequila Patron ESM Ligier JS P2 Honda.

Qualifying third was the fastest Daytona Prototype, the No. 31 Whelen Action Express Corvette DP, driven by Dane Cameron to a best lap of 120.275 mph. Fourth was Cameron’s teammate, Christian Fittipaldi in the No. 5 Mustang Sampling Corvette DP at 119.995 mph. Fifth was the faster of the two Mazda Prototypes, the No. 55 driven by Tristan Nunez.

Pla’s pole was especially remarkable since the car was crashed in night practice Thursday evening, and the team worked until 3 a.m. to repair it.

"It was tough for many ways," Pla said. "First, because yesterday the crew had to repair the car overnight. Things were a little bit crazy.

[adinserter name="GOOGLE AD"]"I think I love this track. I know this one is difficult but the team gave me a great car. We changed the setup because yesterday we were a little bit struggling and today it paid off, so I have to give them a huge thanks."

"This was a great effort from the entire team. The guys had to rebuild the car after a crash [in practice] last night, and I had to extract the maximum from myself and the car. It was tough, but we did it together. We made one small setup change from this morning, and it paid off big for us today. The weather for tomorrow is uncertain [rain is in the forecast], so the race will have its own challenges. We’ll be ready."

In the tough GT Le Mans class, many of the competitors feel that the two BMW Team RLL BMW M6 GTLMs have the edge, and qualifying did nothing to discourage that notion: Bill Auberlen in the No. 25 car nipped the No. 100 team car, driven by John Edwards — Auberlen’s best lap was 113.714 mph, compared to Edwards’ 113.532. It was, said Auberlen, "a picture-perfect day."

"We went out and did the practice before qualifying and came upon a setup that was quite good," Auberlen said. "We were making slight tweaks, it’s not big tweaks anymore. We just had to do the same thing again during qualifying – just put a good lap together. I didn’t do anything crazy it was just enough out of control and it was enough for first."

In Prototype Challenge, seven cars took time. Colin Braun destroyed the competition, as he has all during practice, in the No. 54 CORE autosport ORECA FLM09/Chevrolet, with a fast lap of 117.170 mph. He was close to a full mile per hour faster than second-place Tom Kimber-Smith 116.226 mph in the No. 52 PR1/Mathiasen entry.

Nineteen of the 20 GT Daytona cars took time — the No. 6 Stevenson Motorsports Audi had gearbox problems and will start from the rear. With practically the whole GTD field new this year thanks to the off-season adoption of the global GT3 rules, it was a tight battle up front, won by the No. 63 Scuderia Corsa Ferrari 488 GT3, thanks to Jeff Segal’s best lap of 110.045 mph.

The Ferrari 488 was delivered late to the teams, and Segal made a point of thanking his crew.

"It’s been a lot of hard work from the team," Segal said. "We had a productive test and left with a lot of confidence. There is still a lot left with a 12-hour race tomorrow. It’s a little more special this weekend with Ferrari’s 60th anniversary of their first win here."

Second in GTD was the No. 33 ViperExchange.com Dodge Viper GT3-R with Jeroen Bleekemolen behind the wheel, followed by the No. 96 Turner Motorsport BMW M6 GT3 driven by Jens Klingmann. Fourth and fifth were the two Alex Job Racing Porsche 911 GT3 Rs.

The weather forecast for Saturday shows a good chance of rain, which can certainly color the outcome of an endurance race like it did in the 2015 season-ender, the Petit Le Mans at Road Atlanta, where drenching rain favored the full-bodied cars, and a Porsche GT Le Mans entry one. The Sebring forecast doesn’t appear to be that wet, but it could make for a very interesting race.

Live television coverage of the 64th Mobil 1 Twelve Hours of Sebring Fueled by Fresh from Florida begins at 10:30 a.m. ET on FS1 and the Fox Sports GO app. Television coverage shifts to FS2 from Noon to 7 p.m.; continues on IMSA.com and the IMSA mobile app from 7-10 p.m., and concludes on FS2 from 10-11 p.m.