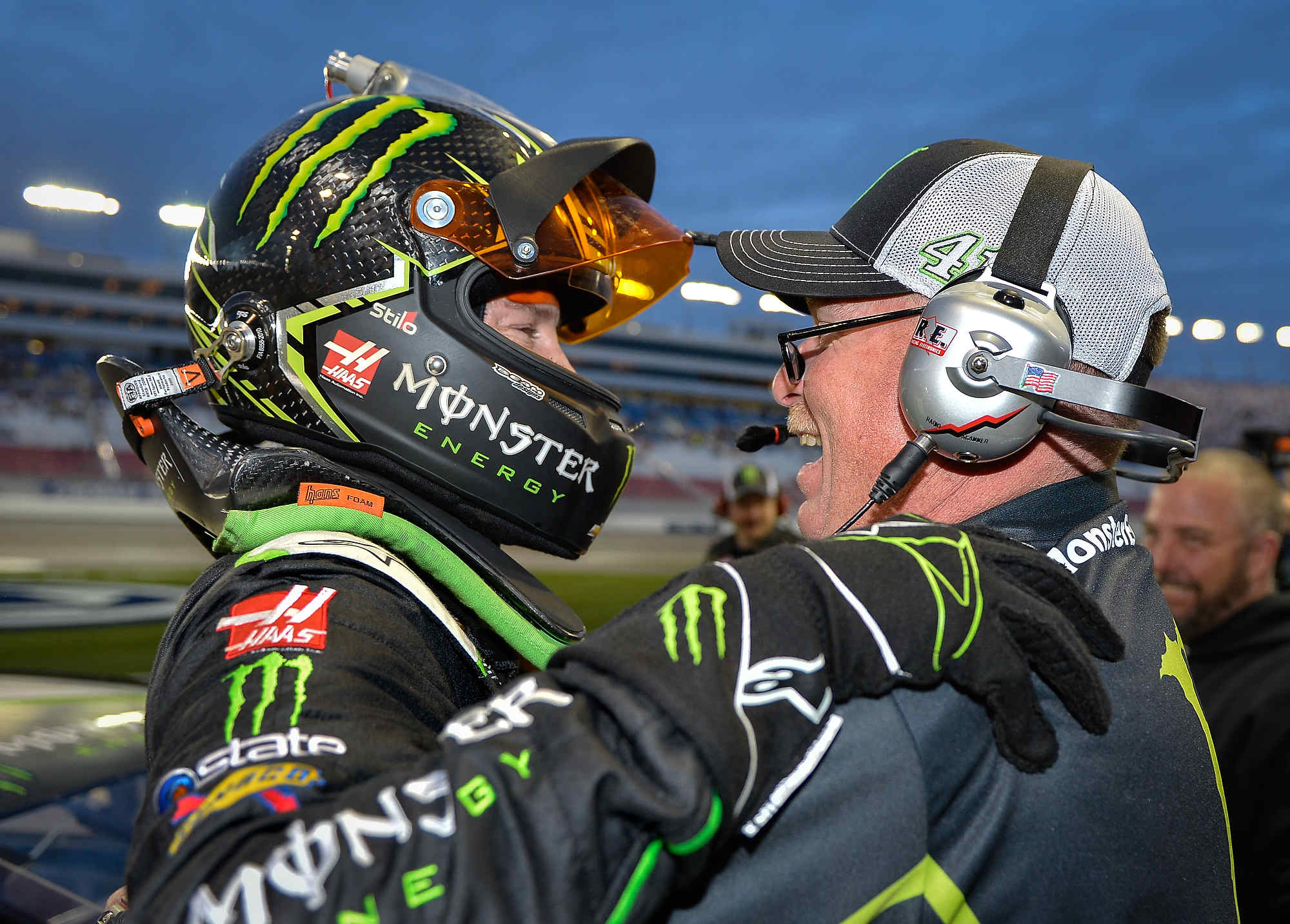 Busch pushed the Stewart-Haas Racing No. 41 Chevrolet to a fast lap of 196.328 mph, snagging the first starting spot for Sunday's Kobalt 400 (3:30 p.m. ET, FOX, PRN, SiriusXM NASCAR Radio). The pole position was Busch's second of the season, second at the 1.5-mile Sin City track and 21st of his Sprint Cup career.

"Man, I wasn't going to lift for anything," Busch said. "I was giving it all I had. I'm really proud of the team to help me get to that third round. I was overdriving the car and I needed to settle in and (crew chief) Tony Gibson made a great adjustment in that last round. I was hoping to put on a show for the home crowd, get the pole, but now we've got to go to work tomorrow. I hope we can get the car dialed in for long run speed for Sunday."

Joey Logano qualified for the second starting spot with a best lap of 195.851 mph in the Team Penske No. 22 Ford. Matt Kenseth qualified third in the Joe Gibbs Racing No. 20 Toyota. Brad Keselowski, Logano's Penske teammate, secured the fourth starting spot with Austin Dillon completing the top five in the Richard Childress Racing No. 3 Chevrolet.

Kevin Harvick, the defending race winner, was sixth-fastest in the Stewart-Haas Racing No. 4 Chevy. Four-time Vegas winner Jimmie Johnson, who prevailed last week at Atlanta, landed the 11th starting spot in the Hendrick Motorsports No. 48 Chevrolet.

Carl Edwards failed to advance out of the second of three rounds of elimination-style qualifying after hitting the wall in Turn 2. His Joe Gibbs Racing crew unloaded a reserve car to prepare for Sunday's 400-miler, the third premier-series race of the season.

"It hit hard, bounced up the race track and man, that was it," Edwards said after emerging unhurt.

The crash was to Brian Vickers' detriment. The fill-in driver for the injured Tony Stewart in the Stewart-Haas Racing No. 14 Chevy had a fast lap scrubbed off when the red flag flew for Edwards' incident early in the 10-minute segment. Stewart, back at the track for the second straight week as he recovers from a broken vertebra, was seen with crew chief Mike Bugarewicz arguing the team's case to NASCAR officials on pit road.

The opening 20-minute qualifying session was also marked by a pair of incidents. Jamie McMurray tagged the outside wall at Turn 4's exit with his Chip Ganassi Racing No. 1 Chevrolet. And Keselowski's crew was forced to change a tire on the Team Penske No. 2 Ford after a piece of stray metal caused a flat. The team was allowed to make the adjustment between rounds without penalty.

Busch, a Las Vegas native, also earned the designation of fastest qualifier with a best lap of 196.378 mph in the opening session, a shade better than his pole-winning lap. Busch's speed eclipsed the former track record of 194.678 mph set by Jeff Gordon at the 1.5-mile venue last March.

WAS THAT FAST LAP A LUDICROUS SPEED LAP?
“It was insanely fast. It’s amazing all the detail that goes into qualifying with finding that perfect lap three times out there. My second outing we were way tight and I didn’t know where it came from. (Tony) Gibson, (crew chief) and crew went to town. They just adjusted on it. We gambled and we made that last session, which was great. That was icing on the cake to be able to go out into the third round. I was first or 12th it didn’t matter. Thanks to Haas Automation, Monster Energy, two poles in a row, this is great. This is how you work through an off season and show up to qualify, now we just need to find that speed on the long run. Really proud of everybody at SHR."

[adinserter name="GOOGLE AD"]DID IT HELP THAT YOU GUYS WENT AND LOOKED AT THE VIDEO?
“Team communication all the way around. They can hear it in my voice on times when I’m confused by something at this time now they are like ‘okay this is where you need to try to do something different.’ It’s just team work that is what it is. You have to have offense, defense, special teams and I’ve got a great group."

HOW SPECIAL IS IT TO COME BACK THIS YEAR AND GET THE POLE?
“Man, I wasn’t going to lift for anything. I was giving it all I had. I’m really proud of the team to help me get to that third round. I was over driving the car and I needed to settle in and Tony Gibson (crew chief) made a great adjustment in that last round. I was hoping to put on a show for the home crowd, get the pole, but now we’ve got to go to work tomorrow. I hope we can get the car dialed in for long run speed for Sunday."

HOW IMPORTANT IS TRACK POSITION?
“It’s going to be neat to have that pit stall at the end and just kind of roll off the jack and hopefully beat everybody off pit road if they have done a better job through the race to get ahead of us. We hope to protect our track position all day."