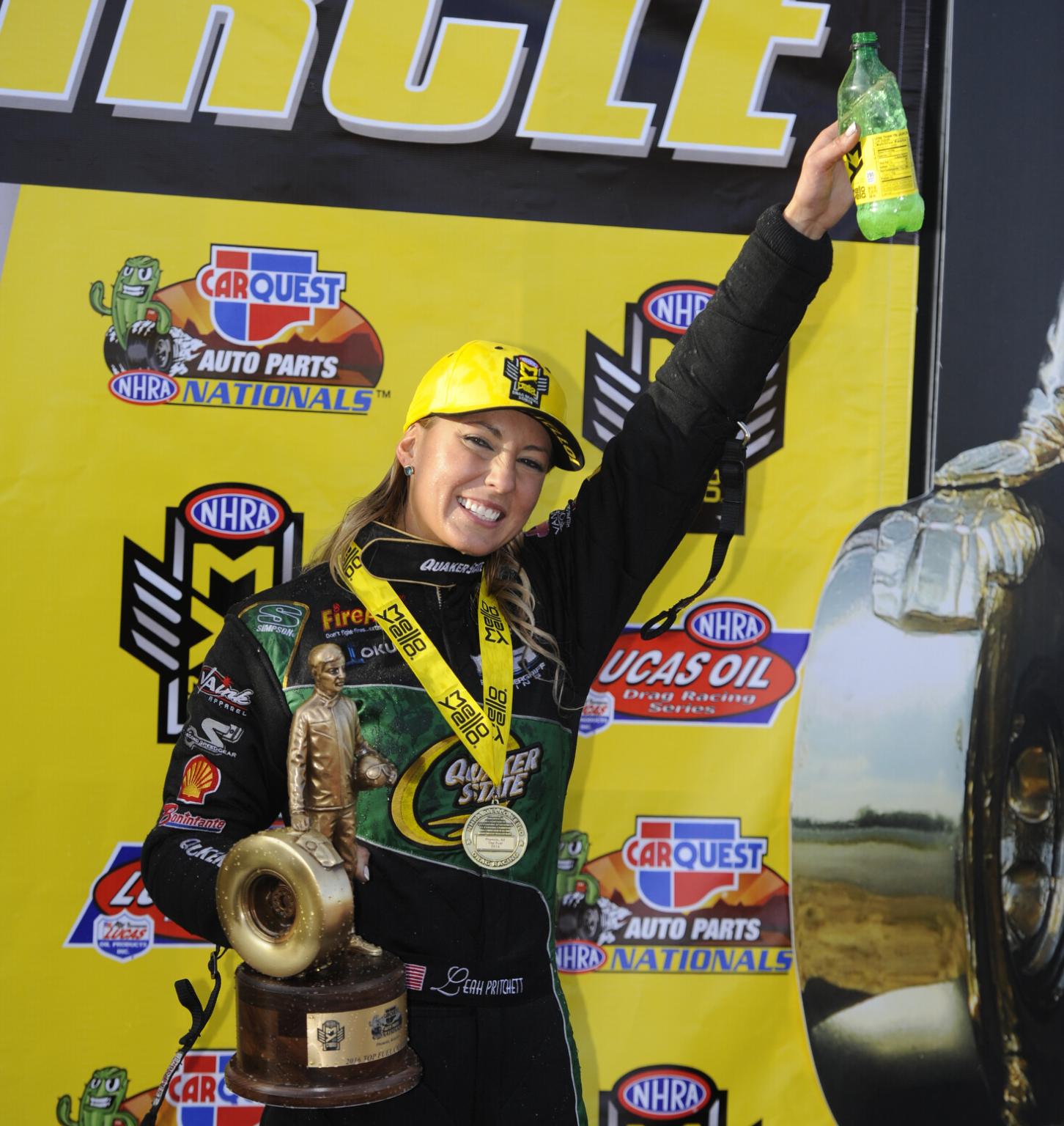 Pritchett used a quicker reaction time and a performance of 3.775 seconds at 323.12 mph in her Quaker State dragster to finish in front of Brittany Force's 3.774 at 321.35 in her Monster Energy dragster. It was the first all-female Top Fuel final since Shirley Muldowney defeated Lucille Lee in 1982 in Columbus, Ohio. It is only the fourth time two women have decided a pro class victory in the Mello Yello Series. Angelle Sampey and Karen Stoffer have met twice in finals in Pro Stock Motorcycle, most recently at Norwalk last season.

[adinserter name="GOOGLE AD"] Pritchett outran J.R. Todd, Clay Millican and Antron Brown in the first three rounds before defeating Force in the final. She is the 16th woman to win a Mello Yello Series race and the eighth female to win in the Top Fuel category.

"It is the happiest day of my life, besides getting married of course," said Pritchett, who posted a runner-up finish in her only other Top Fuel final, last season at Atlanta. "This is what dreams are made of.

"I feel like I just won the Super Bowl, even though it's only the second race and it's not the U.S. Nationals, for me it's an incredible personal and professional victory to be able to compete with the team that I'm with."

Pritchett moved to fifth in the points standings with the win. Event top qualifier Doug Kalitta, who lost a close race to Force in the semis, is the points leader, eight ahead of Winternationals winner Steve Torrence, who was upset in the opening round.

Wilkerson made it past Robert Hight in semis and also knocked off Chad Head in the opening round and took out series points leader and event top qualifier Ron Capps in the second round.

"I am just happy to be here," said Wilkerson, who moves to fifth in the points order with the win. "We're very excited about what happened here today. That's the best run we had all weekend [in the final]."

Line beat Chris McGaha for the Pro Stock victory with a 6.666 at 205.16 in his Summit Racing Equipment Chevrolet Camaro, while McGaha's Camaro posted a 6.671 at 208.75 in the runner-up effort. It was Line's second consecutive final round appearance of the season and the two-time world champ takes over the series points lead.

Line defeated Matt Hartford and Jeg Coughlin in the first two rounds and then was able to gain back team bragging rights by outrunning teammate Greg Anderson in the semis. Line lost to Anderson in the Pomona final two weeks ago.

"It was a fun day, a great way to start the year," said Line of his second Phoenix victory in four final round appearances at this event. "We are off to a much better start this year."