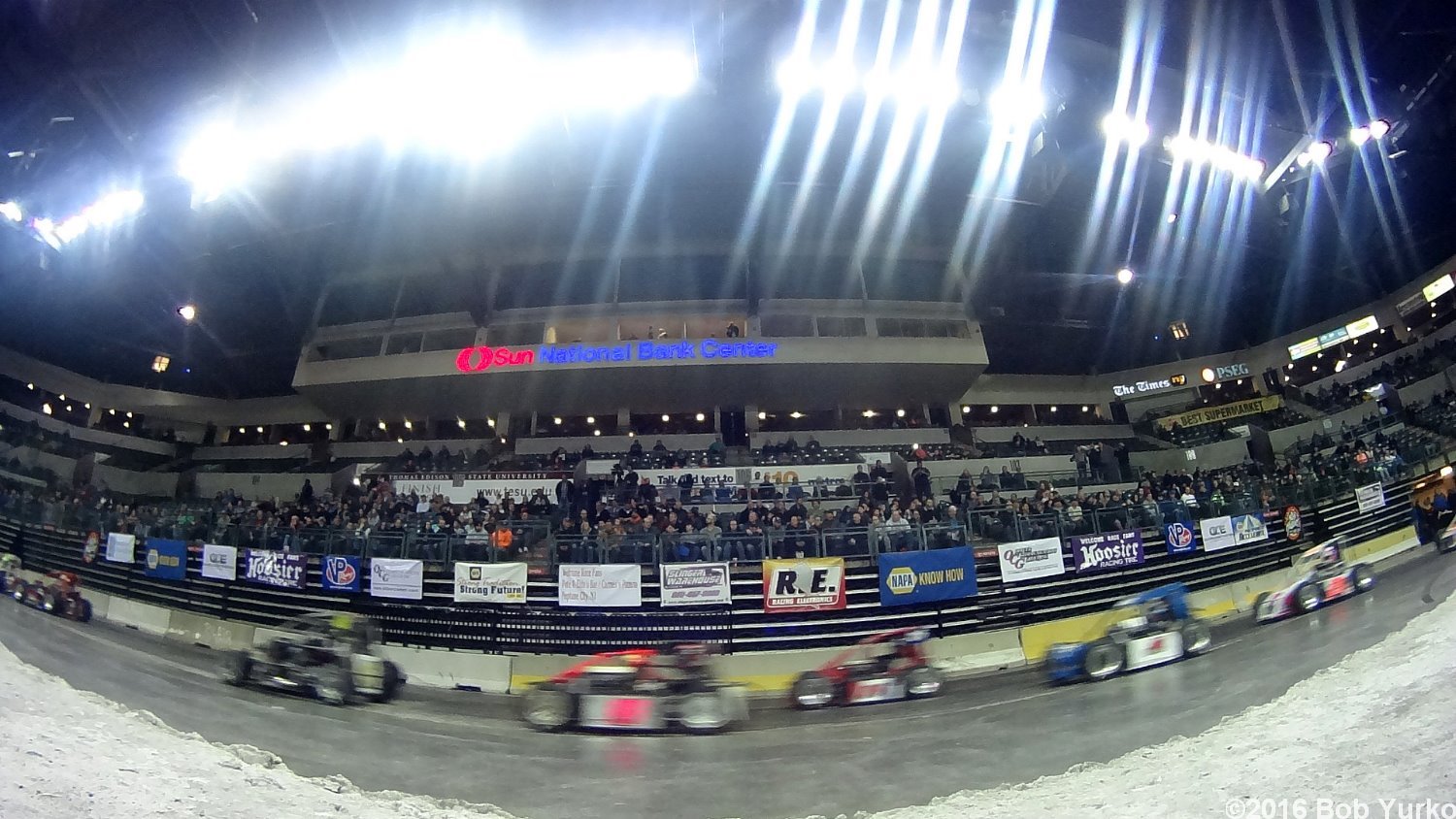 Erick Rudolph wrapped a near-perfect weekend Saturday night at Sun National Bank Center in Trenton, N.J., when he won the 40-lap Battle Of Trenton TQ Midget Indoor race. The victory was his second of the three race Len Sammons Motorsports Productions VP Racing Series 2016 season and he earned his second straight Series title with the win.

"The car was good, as it always seems to be," Rudolph said. "I got a break or two in lapped traffic and was able to get good restarts."

Tony DiMattia, driving one of the four 600 Micro Sprint cars that qualified for the 26-car feature, moved by Jimmy Blewett off the final turn on the last lap to finish a shocking second; Blewett settled for third.

"I dropped back a little at the start because things happen in the early laps in these races," DiMattia, who started 13th, said. "Then the car just started coming in."
The finish was so close that DiMattia had to be told by his crew after the race that he had edged Blewett for the second spot.

The revision came when apparent second finisher Tony DiMattia was disqualified for a motor infraction discovered during a routine post-race inspection.

The post-race disqualification elevates Jimmy Blewett to the runner-up spot in the official finish and Scott Kreutter is now credited with a third place result. Kreutter was acknowledged as the race’s Hard Charger, an award sponsored by Dr. William Lowe. Kreutter started 20th in the 26-car field.

Each of the other drivers moves up one spot in the official finish with DiMattia disqualified and placed 26th and last in the running order.

An eight-car, five-lap Dash that determined the order of the first four rows for the 40-lap headliner was won by Susice over Rudolph and Blewett.

Five 10-lap TQ Midget heat races with the top two finishers in each transferring to the A-Main were won by Zane Zeiner over Andrew Krause, by Andy Jankowiak ahead of Matt Roselli, by Emerling over Bobby Holmes, by Justin Bonsignore ahead of Earl Paules and by DiMattia ahead of John Ivy.

Krause's second place finish in heat one was particularly noteworthy in that he started from the rear of the field. Holmes' runnerup finish in heat three was remarkable in that he gained the spot over Joey Payne on a daring inside turn three pass on the final lap, and Ivy's second spot result was worthy of note in that it was his first successful qualifying effort after previous difficulties in Atlantic City.

Mike Lichty won the D-Main for the TQs, and Ryan Tidman the C-Main. The B-Main which secured starting spots for the first four cars in the A-Main was won by Joey Payne.

Jesse Hartman started on the pole in the 20-lap Slingshot feature and stayed there throughout the race. It was a remarkable race in that Anthony Raisner challenged Hartman for the final ten laps as lapped traffic interfered with the leaders' pace. But Hartman held, to win a race that took just four minutes and three seconds to run.

Rudolph was named the LSMP Slingshot champion, based on points accrued in the Allentown, Atlantic City and Trenton Slingshot races.

LSMP will release its 2017 Indoor Series schedule soon. The traditional end of January Boardwalk Hall Atlantic City race will anchor the slate with events at Allentown, Pa. and Trenton, N.J.