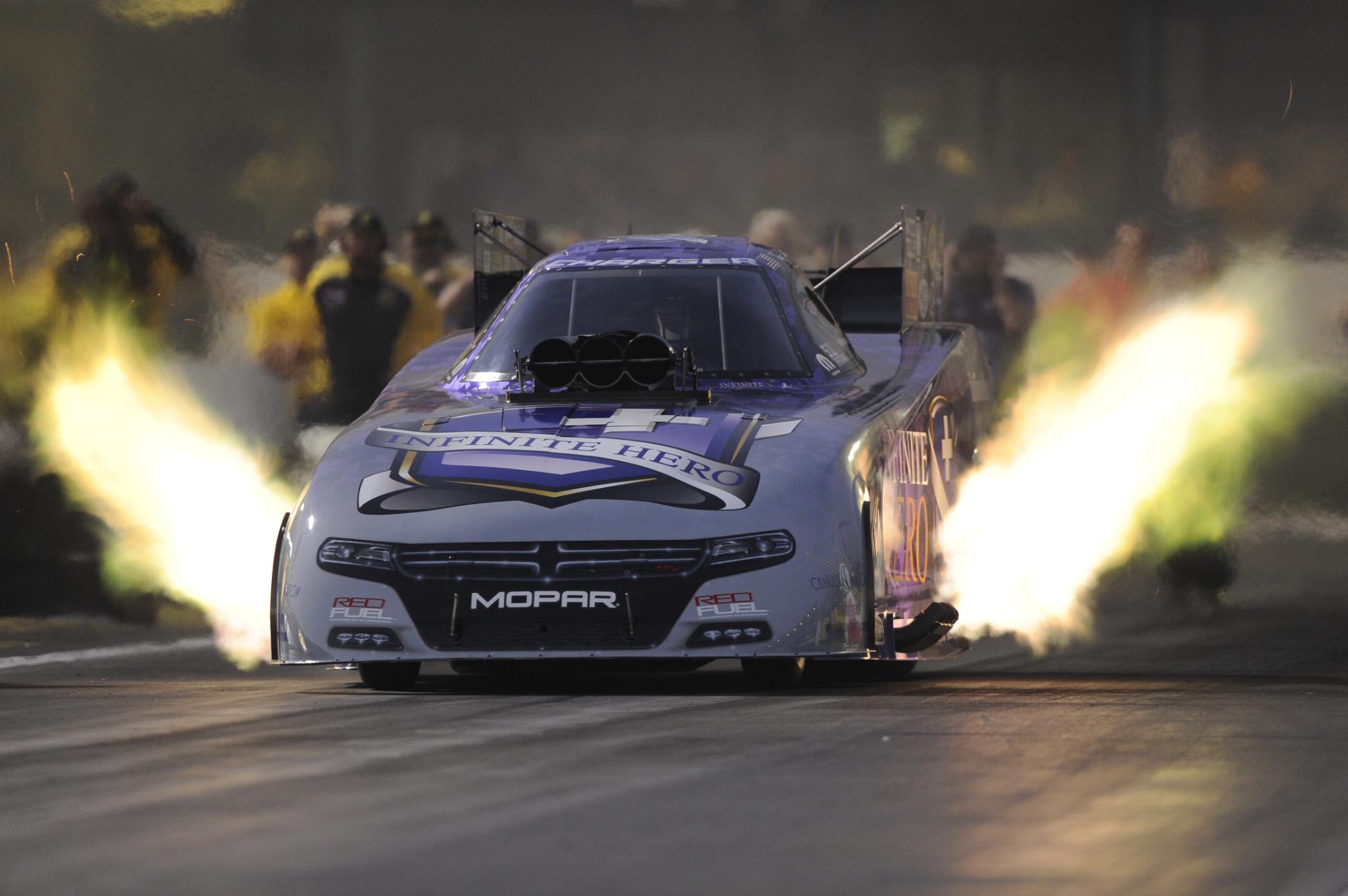 Jack Beckman picked up right where he left off last season by racing to the No. 1 qualifying position in Funny Car Saturday at the Circle K NHRA Winternationals at Auto Club Raceway at Pomona.

Beckman, who failed to qualify at this event one year ago but then rallied to post seven wins and set the national record four times en route to challenging for the Funny Car world championship, continued to prove he has the quickest Funny Car in the pits. In the final qualifying pair he clocked a 3.888-second run at 326.16 mph in his Infinite Hero Foundation Dodge Charger R/T to take his first No. 1 at the Winternationals and 16th of his career. He will open eliminations against John Hale.

"As a hometown guy it's tough to come out to the first race of the year because there's a little extra pressure to do well and some stress if you don't, but we are beyond that," Beckman said. "It's clear that [crew chiefs] Jimmy [Prock], John [Medlen] and Chris [Cunningham] are getting a handle on this car. When you see them getting that close you know great things are in store for this team."

[adinserter name="GOOGLE AD"]Beckman's teammate Ron Capps is second in his NAPA Auto Parts Dodge Charger with a 3.902 at 324.51 and Friday leader Robert Hight qualified third with a 3.913 at 322.04 in his Auto Club Chevy Camaro. Hight has an intriguing matchup as he will face No. 14 qualifier Tommy Johnson Jr., whose Make-A-Wish Dodge Charger was the talk of pre-season testing but has struggled this weekend, posting a best of 4.256 at 225.22.

In Top Fuel, Torrence powered to his sixth career No. 1 qualifying position and his first ever at Pomona, clocking a 3.703 at 328.06 in his Capco Contractors dragster. He will open eliminations against nitro journeyman Steve Faria.

"We weren't holding anything back," Torrence said. "The conditions were the best we've seen this weekend so we said why not go for it. We've got a really good hot rod right now and I just want to do my job and hopefully we can walk away from here tomorrow with one of those little gold men."

Anderson earned his 81st career No. 1 qualifying effort in Pro Stock with a performance of 6.585 at 209.62 in his Summit Racing Equipment Chevy Camaro. It is Anderson's sixth No. 1 at the Winternationals and he will go for his sixth win at this event tomorrow when he faces Matt Hartford in the opening round.

"When you come to the Winternationals you are scared to death about the competition," Anderson said. "This year with all the changes we were incredibly scared not knowing where everybody was. It's been a learning curve for everyone and a steep one. To be where we are at right now versus the first time we put an engine on the dyno, we've come a long way. Feel fantastic. I knew when we changed the rules and I might've shed a tear or two. Right now I am able to forget about it and move on and embrace the challenge and learn to like EFI. I hate to say it, but I am learning to like it."