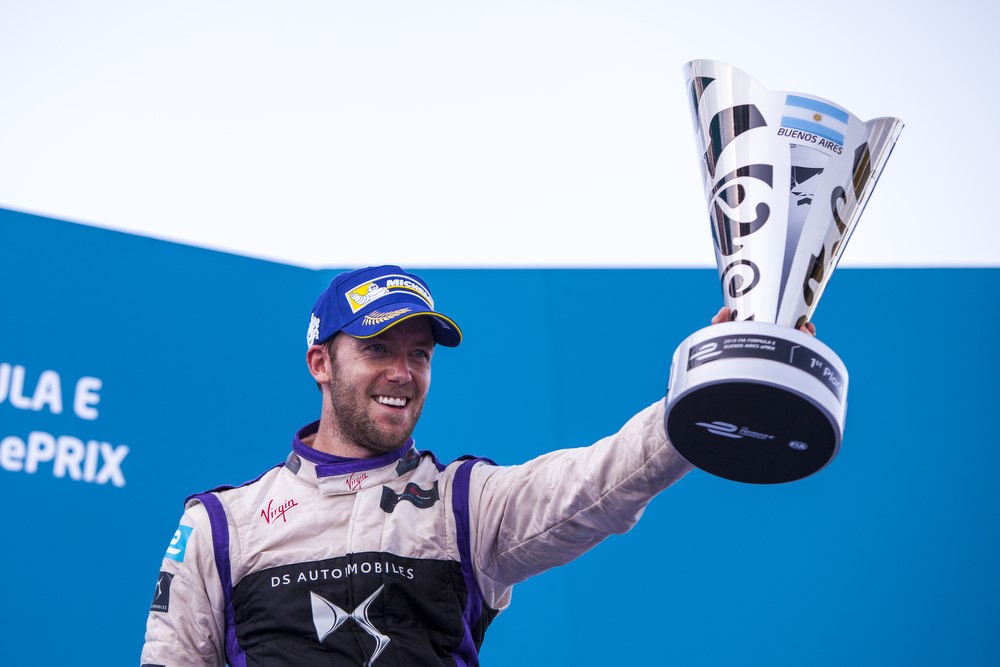 Sam Bird produced a brilliant performance to hold off the charge of Sebastien Buemi and claim the first Formula E win for the DS Virgin alliance.

Bird started the race from pole and controlled the pack from the front, just using enough energy to keep Nico Prost (Renault e.dams) and then Team Aguri’s Antonio Felix da Costa at bay. While the Brit was untroubled at the front, from the back of the grid Buemi was giving his all to try to work his way up the order.

The Renault e.dams driver pulled off an audacious four-wide move on the opening lap to ensure he vaulted from 18th to 15th in one fell swoop. From there on he meticulously carved his way through the pack, picking off his rivals one by one, so that he was into fifth place when the unfortunate da Costa’s car ground to a halt.

The Qualcomm Safety Car was deployed and bunched up the field, and meant Buemi was now a realistic contender for victory. With Renault e.dams team-mate Prost running slowly as he entered the pits for the mandatory car swap, Buemi jumped into third, behind Bird and title rival Lucas di Grassi (Abt Schaeffler).

[adinserter name="GOOGLE AD"]Di Grassi knew his best chance of victory was to attack Bird right after the restart and set about chasing down the Brit. But in his effort to exert pressure he made a small but critical mistake. The loss of momentum allowed Buemi to get a run, draw alongside and steal away second place.

This initially afforded Bird some respite, but with just two laps to go, Buemi homed in on the leader. Bird took the law of defensive driving to its limits, but not beyond, and managed to keep Buemi behind. Following a difficult start to the season, during which the DS Virgin car demonstrated pace but not consistency, it was a very welcome result.

Bird said: “As everybody knows we merged with a great manufacturer, DS, for this season and the hard work at the DS Virgin Racing team has produced a really good car today. This is for the boys and the ladies who have worked tirelessly since Punta [del Este] to give me a better race car."

Buemi’s second place means he extends his championship lead, but the way in which he was able to fight from the back demonstrated that victory would surely have been his had he not made the mistake in qualifying.

Buemi said: “To be honest I’m a bit sorry for my team because I think today I had a great car and didn’t get the most out of it. But the race itself was great, it was hard because I think apart from da Costa who stopped, I had to overtake all the other guys. It’s good to be here and finish second. I was a bit lucky with the safety car, in fact a lot. Without that it would’ve been a bit more difficult."

In front of 17,000 passionate fans, di Grassi was pleased to finish third, keeping up his record of taking a podium position in every race this season and ensuring that he’s just four points adrift of Buemi in the drivers’ standings. However, he felt it was the team’s weakest performance of the season and urged the team to take strides ahead of the next race, which takes place in Mexico City on March 12.

[adinserter name="GOOGLE AD"]Di Grassi said: “We didn’t have a good car here; I think it was our worst race in terms of pure pace. Qualifying was not so good and the race also. To close the gap on them I had to use more energy so I had to save it in the end. I think all the teams did a step forward after Punta testing and we didn’t. Renault did a big step and it was shown today that with a track you can overtake you can start at the back, even if he was lucky with the safety car. They are very strong so if we want to fight for the championship, we have to work much harder."

Stephane Sarrazin continued his strong form in qualifying with a solid run to fourth for Venturi, to equal his best Formula E result to date. Front-row starter Nico Prost finished fifth on the road, fighting back from eighth after a quick spin.

Loic Duval was sixth, capping a great performance from the Dragon Racing driver from a disappointing 12th on the grid. His team-mate Jerome D’Ambrosio was less fortunate and was involved in a first-lap incident with Salvador Duran (Team Aguri), which caused the rear wheel guard to rub against his right-rear tire. After having to make an unscheduled pitstop he was running in last, but used this to manage his energy so that he could set the Visa Fastest Lap and claim two bonus points.

On his return to the series after his injury-enforced break, Nick Heidfeld produced a solid drive to take seventh place. Meanwhile his Mahindra team performed heroics to repair Bruno Senna’s damaged car from qualifying. The Brazilian repaid their efforts by claiming the final point for 10th.

Robin Frijns continued his run of scoring points in every race for Andretti with eighth place, while Oliver Turvey came home ninth for NEXTEV TCR. Bird’s DS Virgin team-mate Jean-Eric Vergne just missed out on the points in 11th. The Frenchman was suffering from chronic food poisoning and was forced to miss both free practice sessions. Like Bird and di Grassi he was the winner of FanBoost, and he used his additional energy to help him climb the order but fell just short of a top-10 finish.