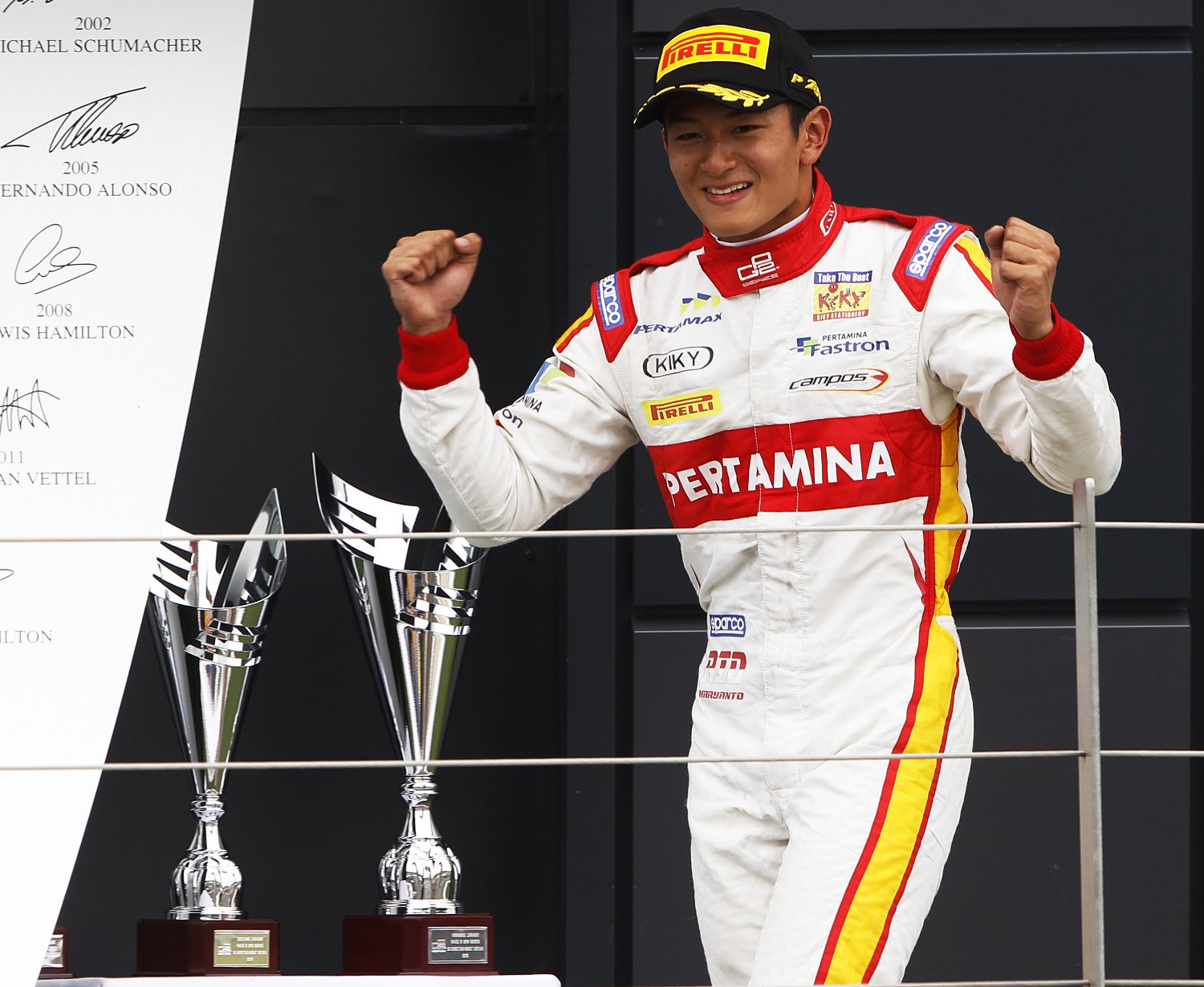 UPDATE Manager Piers Hunnisett has been working hard behind the scenes to secure the amount required to see Haryanto through to the end of the year, which is close to being in place according to Autosport.

"At the moment I'm quite confident things are going to turn out well," said Haryanto. "I've obviously been focusing a lot on doing the best job I can and getting the results I wanted, that I don't get distracted by things going on behind me.

"What happens now is all down to my management, and from what I've been told by my management, everything seems quite good. I just have to keep on pushing, to keep doing the best I can and get the best results for the team."

Asked by Autosport whether Hunnisett had expressed confidence regarding a drive for the second half of the season, Haryanto replied: "That's what I've been told. I'm happy. I now just have to focus on my job, and that's it."

Contacted by Autosport with regard to Haryanto's position, Hunnisett said: "The situation has taken a positive turn over the last couple of weeks. There are just a few things that need finalizing, but it is now looking good for Rio to continue with Manor for the rest of the season."

01/30/16(GMM) The long race for a seat at Manor is entering its final days, according to the Jakarta Post.

The Indonesian newspaper is closely following the fortunes of Rio Haryanto, a local driver who finished the 2015 GP2 season in fourth place.

He is reportedly on pole for a seat at Manor thanks to his backing by the Indonesian government, including the state-owned oil company Pertamina.

The latest report suggests Haryanto's wait for news has entered its final week.

"I really hope for the best that my dream will come true," he said during a press conference at the youth and sports ministry building in Jakarta.

The Jakarta Post said Haryanto has $5.6 million in Pertamina sponsorship, plus another $7.2 million from the youth and sports ministry.

It would appear to make him the favorite for a Manor seat, among other candidates including Alexander Rossi, Will Stevens, Mercedes' Pascal Wehrlein and Kevin Magnussen.

"We would like to express our gratitude to the government – Pertamina and state-owned enterprises – which has been very supportive of Rio reaching F1," said Indah Pennywati, Haryanto's mother.

"We are looking forward to good news from Manor Racing regarding Rio's participation in the event by next week," added Pennywati, who is involved with her son's management.

A spokesman for the youth and sports ministry said a down-payment to Manor is due shortly.

"Therefore, this week will be a critical time for Rio in entering F1," he said.

Rio Haryanto's prospects of making his Formula 1 debut with Manor in 2016 have taken a step forward after the Indonesian government agreed to make up his funding shortfall, GPUpdate.net was told.

A letter which circulated last year, released by Minister for Youth and Sports Imam Nahrawi, revealed Manor had requested that Haryanto bring â‚¬15 million worth of sponsorship in order to secure a 2016 seat.

Haryanto had received a guarantee of â‚¬5.2 million from state-owned oil and gas corporation Pertamina, which has acted as his primary sponsor throughout his junior racing career to date.

In a meeting held in Indonesia's capital, Jakarta, on Friday, it was agreed that the government, ostensibly through the Ministry of Youth and Sports, will fund the remaining â‚¬9.8 million required.

"Yes, it is clear now, that Rio does not have any obstacle to join Formula 1 after being provided financial support from the government and Pertamina," a government spokesperson told GPUpdate.net.

Haryanto, 23, has held links with Manor since its Virgin Racing guise, and received a Formula 1 test at the end of 2010 after finishing fifth in the GP3 Series, before enjoying two further test days with Marussia in 2012.

Haryanto has spent the last four years racing in the GP2 Series, in 2015 placing fourth with three victories, and also sampling Formula 1 machinery again as he appeared for Manor in the Abu Dhabi tyre test.

Manor is yet to confirm either of its drivers for the 2016 campaign as it prepares to debut a new car for the first time since 2014, which will be equipped with current-year Mercedes power units.

It now rests on Manor to rubber-stamp any potential deal for Haryanto.

(GMM) Indonesian GP2 driver Rio Haryanto does not yet have his F1 race debut for 2016 in the bag.

Earlier, it was reported that the Indonesian government would put up the EUR 15 million demanded by British backmarker Manor for a place at the newly Mercedes-powered team.

But the Jakarta Post claims that only Pertamina, the state-owned oil company, is definitely pledging EUR 5m for Haryanto, with the 22-year-old still needing the raise the additional 10m.

"I have checked the regulations from the development finance comptroller and the city budget cannot be used for commercial purposes like formula one," said Jakarta governor Basuki 'Ahok' Tjahaja Purnama.

So it now emerges that sports minister Imam Nahrawi is lobbying his government enterprises counterpart Rini Soemarno as well as businesspeople in an effort to raise the rest of Haryanto's funding.

12/12/15 (GMM) Rio Haryanto, a 22-year-old who finished this year's GP2 championship in fourth place, appears to have leapt into pole position to race for the F1 team Manor in 2015.

The promise has even emerged in the form of a letter of guarantee to Manor owner Stephen Fitzpatrick.

Before the letter emerged, minister Nahrawi met with Haryanto and his parents at his Jakarta office, CNN Indonesia claims.

"It would be great for Indonesia," Haryanto's manager Piers Hunnisett said. "Now we will work hard and hopefully Rio really can race in F1 next year."

Haryanto drove for Manor in the post-season F1 test in Abu Dhabi recently.

"After a very competitive season in GP2, I can't wait to show how much I have developed to become a more complete driver," he said at the time.

Will Stevens, Roberto Merhi and Alexander Rossi raced for the former Marussia team in 2015, while Mercedes junior Pascal Wehrlein has been linked with a seat for 2016.