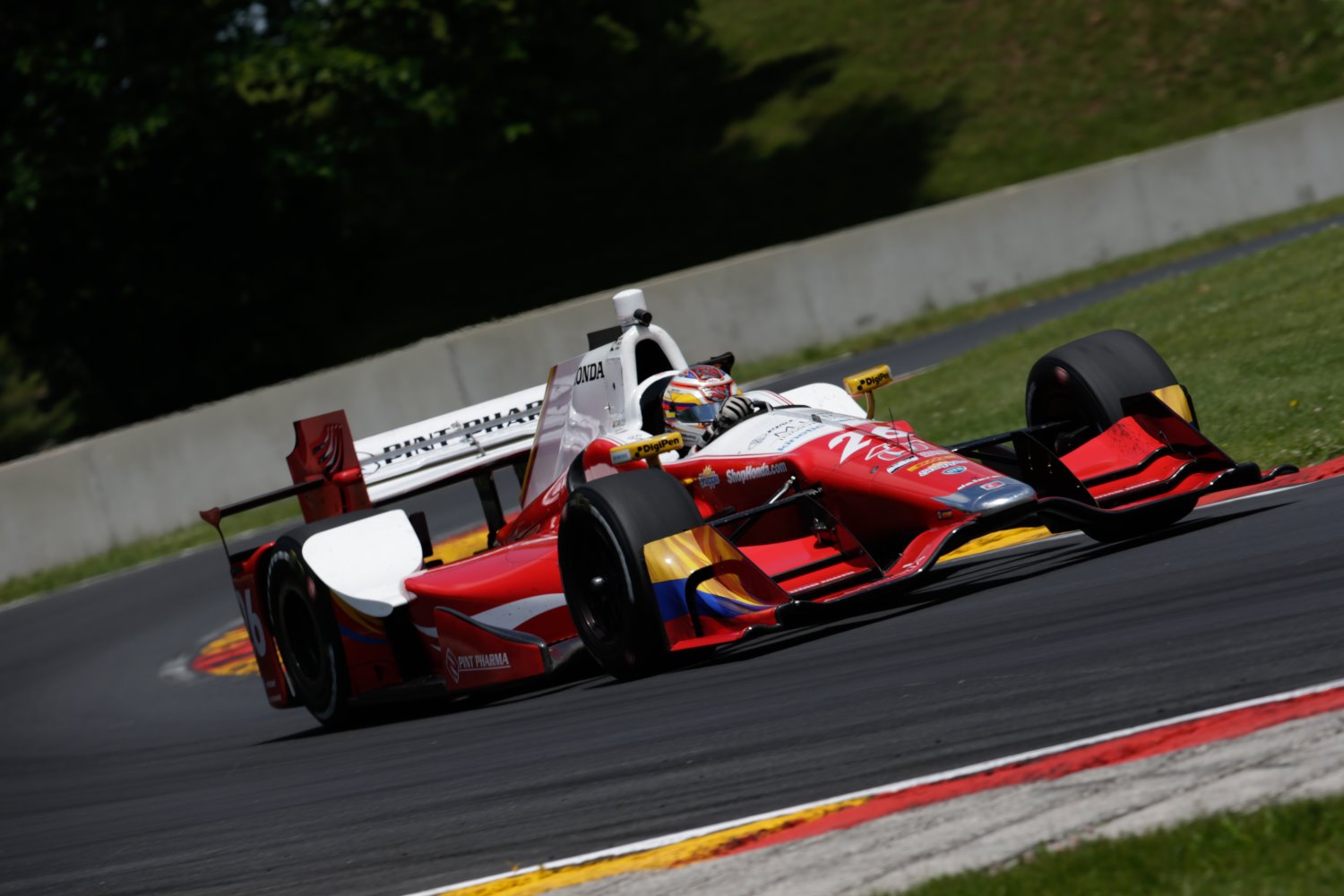 A perfect day weather-wise in Wisconsin's Kettle Moraine country and 15,000 to 20,000 fans showed up to watch the IndyCars practice – that's a crowd bigger than every oval track race day crowd on the circuit, sans the Indy 500.

Everyone in the paddock is ecstatic to be back here at Road America. The confusion is why were they away for so many years? Derrick Walker told us that getting the race back on the calendar was one of the easiest negotiations he ever had. When he sat down with track president George Bruggenthies, Walker asked him "this is such a great track how come we are not here"? Bruggenthies responded, "we want you here." From there the deal was easy.

Amongst the joyous to be back at Road America were the four Team Penske drivers:

JUAN PABLO MONTOYA (No. 2 DeVilbiss Team Chevrolet): “I came here last year to test. It’s been a while since I’ve been here (Montoya’s last Indy car race at Road America was in 2000). It’s going to be tough because the tires are wearing a lot since we haven’t run a lot here. It’s going to be tough with two practice sessions with little track time before qualifying."

HELIO CASTRONEVES (No. 3 Hitachi Team Penske Chevrolet): (On the track’s best passing zones): “The end of the straightaways, Turn 1, Turn 5, maybe (Turn) 12. Those are the best places to pass." (On good places for fans to watch): “I think there are good places to watch all over and that’s why it’s cool to be here. We’re going to have so many fans around the track and wherever they’re going to be, they will have a great time. “

WILL POWER (No. 12 Verizon Team Penske Chevrolet): “It’s a cool, old-school track. It’s very fast, it’s narrow. It’s just one of those old-school tracks like Spa or Nurburgring. I’m really stoked to be back here."

SIMON PAGENAUD (No. 22 Menards Team Penske Chevrolet): “Turn 5 is an impressive corner. We brake so deep and it’s a good passing zone. Also, the kink. The speed we go through in these corners is amazing to see."

We hear tire wear could end up being an issue this weekend. Will Power said if you use the curbs too much the Firestone tires are down to the chords in 8 or 9 laps and a stint of fuel in 12 laps. So if drivers are not careful to protect their tires this 50-lap race could be a 4-stopper.

I stood in the braking zone for Turn 5 and was amazed how short the braking zones because of the high downforce and carbon fiber brakes have become and asked how hard it will be to pass here on Sunday. Both Will Power and Graham Rahal felt the Push-To Pass works really well on the long straights here and they should be able to pass.

Will Power said "I think it will be tough to pass. The braking zones are unbelievably short. It's just tough to get close, it is. Even in the old cars, it was tough. It's a narrow place, lower grip.

"You can definitely make some hay with 'push to pass'. Actually, I think they should have a non-reactive 'push to pass' system where the car in front can't react and you'll see a lot of passing.

Graham Rahal said "I would say I used 'push to pass' on the test a couple times. I think 'push to pass' worked like 3/10ths on one straightaway. That's a lot. That's more than anywhere else.

"I actually don't think it will be hard to pass because you can force somebody into a mistake here pretty easy. I mean, you're seeing brake zones are short, they're compact. If you lock up, you're going straight off. That's why you're seeing so many cars go off.

"If you're behind, you just hound the guy, try to force him into mistakes. I think you can get around people. We'll see."

The result of low TV ratings for IndyCar on NBCSN is weighing heavily on the Andretti team. Both the Alexander Rossi #98 and the Carlos Munoz #26 have empty sidepods. Imagine that – the 1st and 2nd place Indy 500 finishers do not have full year sponsorship because IndyCar refuses to put all the races on Network TV. They like collecting the nice check from NBCSN so they can apply it to the IndyCar welfare program (Leader Circle Program).

Michael Andretti, Paul Tracy and Juan Montoya met with the media and fans today to talk about IndyCar past and present. Some highlights I noted: