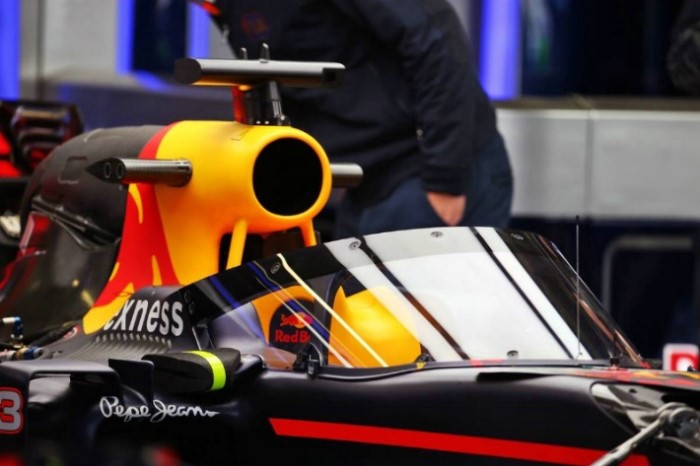 UPDATE I went looking for Jeff Horton Saturday morning in the Indy paddock found him in his office. I was directed to the back room where he was not knowing that he had a prototype of the windscreen sitting on the table. When he saw me he scrambled to cover it up. I do not think what I saw was the final version by any means, but an example of the shape.

Of course I was not allowed to take any photos. What I did see was a single piece unit make of some sort of clear advanced material like on a fighter jet. Horton said PPG was making several prototypes for them and they plan to track test the chosen one later this year with the goal of introducing it for 2017 retrofitted to the existing car.

Unlike the one Red Bull showed in F1 (see image below) that had reinforcement struts in it that block the driver's visibility, the IndyCar one is planned to be a one-piece clear unit.

Horton said PPG has the technology to make the windscreen strong enough, and optically perfect for the drivers despite the tight radius of the curved surfaces. There is no plan for a windshield wiper. "PPG said they have coatings so good the drivers won't even know it's raining," said Horton.

They looked at a full canopy but it has too many issues – both air-conditioning issues and driver extraction issues. Mark Cipolloni reporting from Indy

05/28/16 I was coming into the track at an hour when I normally would be eating breakfast. I was trying to catch up with Jeff Horton, the director of engineering for the Indy Racing League. He occupies an office in the far reaches of Gasoline Alley and a well placed source had told me I might get a chance to see a canopy designed for IndyCars made of glass that one could peer through without any distortion.

The new concept has been shown to half a dozen drivers or so to get their comments. Ultimately, I missed seeing what is more accurately described as a windscreen due to my credential-carrying status as a journalist. But Horton was available and we talked about the new safety project that includes Dr. Terry Trammell, longtime medical director for the IRL, as well as others recruited by Horton. PPG, long involved in Indy racing, is the manufacturer for the project.

To be made by a PPG department that specializes in military and transportation glass, the windscreen will begin at the cockpit opening and reach as far back as the steering wheel at a height of one inch above the driver’s helmeted head. The cockpit will remain open in the sense of the fan’s view and, perhaps more importantly, the driver will be able to get in and out.

“It’s actually a small piece of glass," said Horton, who pointed out the windscreens have been used in various forms throughout the history of the Speedway.

With this modern version, the driver might still be vulnerable to something falling from directly overhead, but the goal is to prevent any object a car might drive into from reaching the driver’s head. Horton said the windscreen would have prevented Wilson’s fatal accident by deflecting an errant nosecone. It would likely not have helped in Dan Wheldon’s fatal accident in Las Vegas in the IndyCar season finale in 2011, he acknowledged.

“Our scenarios are all that the driver ran into a piece (of debris)," said Horton. “We don’t think there’s much of a chance that a piece will fall out of the sky and hit somebody. We’re working off the deflection concept. It will allow full egress by the driver without any help. That’s where you get the windscreen concept."

Testing and development will intensify this summer and the object is to begin work on a final design once the season is over.

“We’ve got several designs. We’ll pick one," said Horton. “We need to get it back to PPG for load analysis. That will help us design the thickness (of the glass) and the final design." There will also be a load analysis done in conjunction with Dallara to determine how a car with a windscreen handles impact during crashes.

What about a driver’s vision? “The driver does look through it," said Horton, who said the products produce by PPG have resolved the problem of distortion. “The angle you can look through it from is unbelievable," said Horton. “They can handle an angle up to 35-degree angles with a complex curve (without distortion)."

Fans who are worried about seeing the driver or yet another modification to open wheel racing may not be enthusiastic about endorsing the windscreen approach. In Formula 1, where Wilson’s accident helped raise more consciousness about canopies that has been present since Felipe Massa was struck in the helmet by an errant spring in 2009, the idea of a canopy continues to draw criticism.

You could probably write a book on how much resistance all manner of safety devices once received that are now accepted as crucial to racing safety. In fact, I am in the process of writing a book on the HANS Device and how difficult it was for inventor Bob Hubbard and business partner Jim Downing to introduce it to motor racing, where it has saved hundreds of lives. It took them ten years to persuade major sanctioning bodies to mandate the HANS, which is now headed toward universal use in all levels of racing.

In the case of a windscreen in IndyCar, it may not be a cure-all protection for drivers in open cockpits. (Even closed cars can get upside down in ways that result in fatal accidents such as the 2001 crash in an Audi prototype that claimed the life of Michele Alboreto.)

If vetted with lab testing and proven to be acceptable in racing circumstances through testing, why not take an additional step needed to protect drivers?

A windscreen may not solve all problems of exposure for drivers in the name of maintaining tradition, if not the ghost of history. But it can provide better protection from a wide variety of unexpected events. Jonathan Ingram/RacinToday