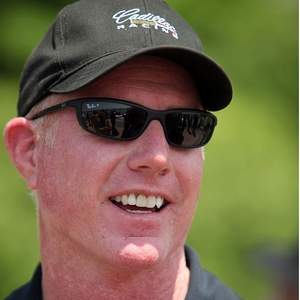 O'Connell collected double wins at Canadian Tire Motorsport Park and Miller Motorsports Park while fighting one of the most diverse GT divisions in the 26-year history of the Pirelli World Challenge.

Taking on teams from Ferrari, Porsche, Nissan, McLaren, Audi, Acura, Bentley, AMG/Mercedes, Aston-Martin, Dodge and Lamborghini, the four-time LeMans champion battled right down to the final lap of the season to gain a 61-point margin over Olivier Beretta in a wild, drama-filled season finale at Mazda Raceway Laguna Seca.

O'Connell describes the competition level in the GT category as "some of the toughest racing on the planet in 2015" in this very interesting one-on-one interview last week at the Cadillac Racing headquarters in Hudson, Mich.

O'Connell: "It was a huge undertaking with a new Cadillac. The amount of man hours put into building the ATS VR was ridiculous. You always visualize in your mind how things will go for the season. But if you asked most people, they would have told you that we didn't have any chance of winning the GT championship. We would be happy just to get on the podium in 2015 with the new car. But the chassis from the get-go had a very athletic feel and it really came down to the GM and Cadillac horsepower and powertrain. And it wasn't easy. We broke a lot of equipment early in the process. Some of our results early in the season proved that I am Irish, because if we had to run 10 or 20 minutes longer, we wouldn't have made it. But the very first race with that car (at COTA), we finished third. So I was optimistic that if we could keep things together, that we might have a chance for another championship."

Question: The competition level in the Pirelli World Challenge GT class really jumped up in 2015 with the likes of drivers like Beretta, Dalziel, Davison, Estre and others and some factory efforts too. What did you expect from those drivers and teams?

O'Connell: "It was cool this year. In the previous three championships, there were always two or three guys who were tough and they had their act together. They were driving well and their teams were strong. I'd say, this year, the Pirelli World Challenge had some of the best racing on the planet. You had a factory driver in the McLaren, Ryan Dalziel in the Porsche, factory driver in the Bentley, factory driver in the Ferrari, factory driver in the Nissan and the Lamborghini and the list goes on and on. But I was stoked about it. I always had great admiration for the series but the series now should be a destination point for a driver's career. Sure, when we start out, we all want to race in F-1 or IndyCar. But very few have that road open up for them. But now the Pirelli World Challenge is a place to be. And to be the best, you want to race against the best. The series was awesome in 2015."

Question: You had some difficult times at the beginning of the 2015 PWC series too after getting crashed at Long Beach and a fire at Barber. How did the team rebound at Canadian Tire Motorsport Park in May?

O'Connell: "I felt good at Long Beach even though the lead only lasted about 75 seconds before I got torpedoed. But that was a critical moment for me mentally. I thought, ‘Okay, I've got these guys now.' Before the Barber race, we had to do an engine change and we started last and we worked our way back up to fourth or fifth. We had a crazy, good race and my confidence with the new car was getting better and better. Of course, we then had the fire in the next race at Barber. I thought that it was game over. But the crew guys put in ridiculous hours to our test car, the mule car, getting it back in shape even though it wasn't as good of a car. But, it's funny. The crew guys call that car, ‘Lucky Penny,' because they found a penny by it when they were building it. And her first two races were at Mosport (CTMP) and it's a track I love. And there was so much pressure on Cadillac Racing there to come back and perform well. You always have defining moments in a season and to come from the fire at Barber and then win two races that weekend, that was our defining moment, for sure."

Question: When you got the new Cadillac after the fire, were there things that developed to turn that car into a title contender or even a championship-winning car?

[adinserter name="GOOGLE AD"]O'Connell: "Actually, the car was the same after the fire as it was at Long Beach. There was no real development, to be honest. The strength of the previous three championships was the data. You run, you record and you learn. As the season moved on, you become more intimate with the car. What she liked and what she didn't like. My engineer, John Lankes, did an amazing job this year. He knows that little window I like the car to be in. And more times than not, we were finding that window to be a consistent front runner."

Question: You began closing in on the point lead in mid-season, and then, at Utah, you scored another double win weekend. Was that track similar to CTMP for you or was there an element that worked well for your Cadillac?

O'Connell: "The basis of that question is brilliant because it really shows what is great about GT3 racing. There are tracks that suit the Ferrari, that suit the Porsche, that suit the Lamborghini, that suit the Bentley and then suit the Cadillac. And there are a lot of similarities between Mosport and Utah. So I went there thinking we could do well. That combination of turns two, three and four are fantastic and I love that place. Yes, I was very optimistic and motivated going into the Utah race. We won pole and executed the race well. We began to think, ‘Okay, can we catch these guys in the points?' And we felt we could if we executed properly. And Utah was the beginning of the run to the title there."

Question: And, of course, then there was the crazy weekend at Mazda Raceway Laguna Seca when you were leading the points. What was your mindset going into the weekend and then during the race?

O'Connell: "At Sonoma, the Ferrari finished in front of us and then we go to Monterey and they get some weight taken off. Boy, I really had to be ready for the finale. And my qualifying lap at Laguna Seca might have been one of my best qualifying laps in my career. Certainly it was my best at that track over the years. In the race, I got a great start and mathematically, Olivier (Beretta), had a bad qualifying so he was going to have to work through the field. The Ferraris were wicked fast there and I was able to jump into second off the start. I was able to hold off one of the Ferraris for a little bit and the Cadillac felt good. I was surprised that the Porsche with Ryan (Dalziel) wasn't as quick as I thought and I was pulling away from him. I was pleased with hitting my marks. But I knew Olivier would be coming. And in my head, I'm thinking mathematically that he has to win the race to take the championship. So, I'm thinking he not only has to get by me but he has to get up close to the other Ferraris.

"Then, only if there are team orders and they make a switch, is he going to have a chance. I'm not sure if that other team was willing to do that. Funny thing is that racing at the highest levels often becomes a chest match. So when you come out of corner, you check your mirrors and look to see where the other guys are on the track. Then you think if you need to worry about it and defend. And the previous corner to the ‘Corkscrew,' it was a no-brainer. He wasn't close enough. So I didn't take a line to defend at that point. And he came from a long way back to attempt that pass in the ‘Corkscrew.' And maybe he thought in his mind, ‘that the only way I can win the championship was to take Johnny out. Then hopefully disable his car and I would go on to win.' Luckily, our car was stout enough to restart and get back in the race. It was high drama, to say the least. It was a well-deserved championship. You don't want to coast to a title. For yourself and your team, you want to work hard for that coveted championship. And, of course, the fans want it to be exciting right to the end. And, of all four of the Pirelli World Challenge championship, this one, by far, is the most significant. For me personally, it means the most."

Question: With all of your titles and LeMans wins, where does this championship rank in your career?

O'Connell: "It's funny because a lot of drivers would trade a championship for a win at LeMans. Well, I can honestly say that the 2015 Pirelli World Challenge GT championship was the biggest accomplishment of my career. With the competition level and the team's comeback from the fire at Barber, this was a career year."

Question: And what about a fifth straight championship?

O'Connell: "Wow, that's tough to think about right now. But Cadillac Racing is one of the best teams in motorsports and I'm already training for 2016. With the level of competition in the Pirelli World Challenge, it will be a tough task. But that's why we get buckled in the car and go racing. I'm excited for 2016."