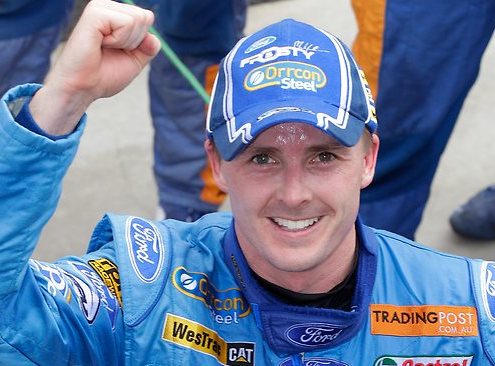 It's taken him 13 years but Mark Winterbottom has finally realized a lifelong dream by winning his first V8 Supercars Championship.

Fittingly, the boy from Western Sydney clinched the title on his home turf when he finished third in today's second race at the Coates Hire Sydney 500 at Sydney Olympic Park.

It gave him an unassailable 220-point lead over nearest rival Craig Lowndes with just one race remaining tomorrow when the man known as `Frosty' will be officially crowned as the 2015 Champion.

"It's awesome boys, I've got a few tears under this visor, I'm speechless," Winterbottom said as he crossed the line. "I'm so proud of the boys … I wish my mum was here."

[adinserter name="GOOGLE AD"]Winterbottom lost his mother June to cancer in 2011 and today carried her image on his helmet as his wife Renee and sons Oliver and Austin watched on from the garage.

After running every season since 2004, Winterbottom has finished in the top five each year since 2006. One second place finish and five thirds has seen him labeled the bridesmaid. Now, he will take the number one into 2016.

"That's awesome. I'm numb, I'll take it all in tomorrow night I'm sure. Just over the moon. We've fought a long time for this, I've been at the team a long time. Thanks to the Ford fans that stuck by – we've had promise, finally we've got the number one on the door."

The Championship win is Prodrive's first, and team boss Tim Edwards was proud to finally clinch the major trophy.

"I can breathe now I don't think I took a breath for the last half hour … unbelievable," Edwards said. "It's fantastic, Mark's been with me just about the whole way through it – it's great to have achieved it together."

Red Bull's Jamie Whincup won the race, but hands over the #1 his Red Bull Commodore has run since 2012.

"Fantastic day, the car had good pace, we started in the right spot – but the day's about Mark, I don't want to take any shine off him," Whincup said.

"He's had a great year, he's been solid. Plenty of critics said he couldn't do it …but I'll happily hand over the number one come tomorrow afternoon."

Whincup led the race from start to finish, which was punctuated by a safety car period after Winterbottom's teammate Steve Owen stalled on track after a sink sensor failure.

David Reynolds, running second, had a score with smoke spotted coming from his front left, but held on to finish second by 1.82 seconds.

Lowndes raced hard, but finishing seventh was not enough to keep Frosty from the top honor.

Owen's issue means Red Bull has snatched the lead of the Teams' Championship, with 16 points over Prodrive.

The V8 Supercars will contest a final 250km race tomorrow on the Sydney streets.