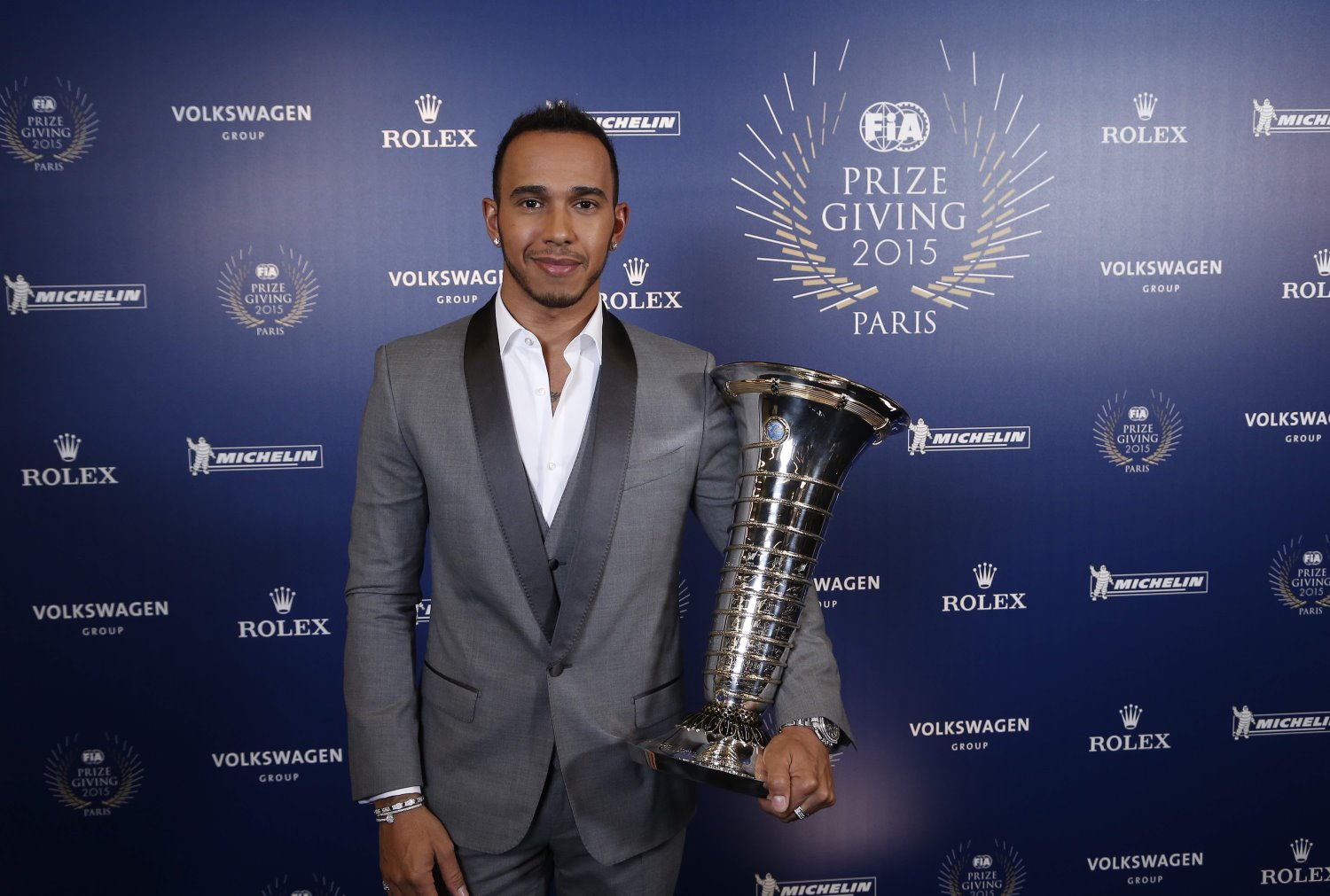 The winners of this year's FIA Championships have been honored in a glittering 2015 FIA Prize-Giving ceremony at the famed Lido theatre in Paris.

In the shadow of the Arc de Triomphe, the most significant triumphs of the motor sport year took center stage at the iconic home of cabaret on the Champs-Elysees.

While the gala evening was naturally somewhat restrained in light of the shocking events in Paris three short weeks ago, the evening was still a celebratory and quintessentially French affair, while giving the year's biggest winners their due.

At the head of the list of Champions sits 2015 FIA Formula One World Champion, Lewis Hamilton who in accepting the Drivers' Championship trophy for the third time took his place among the legends of the sport.

Hamilton's 2015 triumph writes his name in the history books alongside iconic names such as Sir Jack Brabham, Sir Jackie Stewart, Niki Lauda, Nelson Piquet and his boyhood hero, Ayrton Senna. On his way to the title, the Briton climbed to third on the lists of both all-time wins and pole positions, and matched the record for the highest number of podiums in a season.

"It's pretty much impossible to put into words what it means to be a three-time world champion," said Hamilton.

"It is a dream, it's an incredible feeling and I'm very proud of my family for everything they did to get me here today.

[adinserter name="GOOGLE AD"]"I remember how hard my Dad and my Mum worked to make sacrifices for me. It's been a long, long journey – I've been racing for 22 years.

"This year, winning the race in Austin and sealing the championship there was one of the most special races – there's a huge sense of pride in what I have achieved."

This year's FIA World Rally Champion, Sebastien Ogier, is another driver in the process of immortalizing himself as one of the greats of his discipline.

Alongside his long-time co-driver Julien Ingrassia, Ogier claimed his third consecutive World Championship title with Volkswagen Motorsport. The victory places him fourth on the list of all-time Champions in the WRC, and in seven short seasons Ogier has the second-highest number of event wins of all time, only beaten by nine-time Champion Sebastien Loeb.

Conversely, the winning crew of the 2015 FIA World Endurance Championship are all first-time World Champions.

Mark Webber, the battle-hardened Formula One veteran taking on a new challenge, Brendon Hartley, the young and raw talent, matured by endurance racing and Timo Bernhard, the experienced Le Mans winner. The trio proved to be a formidable combination, and after finishing second at the 24 Hours of Le Mans, they took four consecutive race wins to seal the title in a dramatic season finale in Bahrain.

In the FIA World Touring Car Championship and the FIA World Rallycross Championship, drivers Jose Maria Lopez and Petter Solberg both defended their respective titles from last season. However, they did so in dramatically different fashion.

Lopez always looked like a title favorite, from the start of the championship to the end, taking ten race victories out of 24 to clinch the title with a round to spare. Solberg, though, endured a difficult middle part of the season before finishing with four podiums in the last five rounds to confirm his Championship at the finale in Argentina.

Another highlight of the evening was the crowning of the very first FIA Formula E Champion, Nelson Piquet Jr, who endured a thrilling battle in the final round at London earlier this year to win by one point from Sebastien Buemi.

CIK-FIA World Karting Champions Karol Basz (KF), Jorrit Pex (KZ) and 14 year-old Logan Sargeant (KF Junior) also received their awards; one of the biggest reactions of the night was saved for Sargeant when he told the crowd of the eight long years that had gone into his World Championship.

Winning drivers and co-drivers for all of the FIA Regional rally championships were celebrated, as were the FIA Formula 4 champions from all around the world. The FIA GT World Cup winning driver (Maro Engel) and manufacturer (Mercedes-Benz) picked up their trophies, while Richard Lietz and Porsche took the titles in the FIA World Endurance Championship GT category.

[adinserter name="GOOGLE AD"]A number of special Formula One awards were presented to those achieving excellence at the pinnacle of the sport. Broadcaster Canal Latin America was awarded the F1 Television Trophy, CIE was presented with the Best Promoter Award for the incredible Mexican Grand Prix event, and the FIA's German ASN, DMSB, won the Bernie Ecclestone award with German drivers having scored most points during the FIA Formula One World Championship.