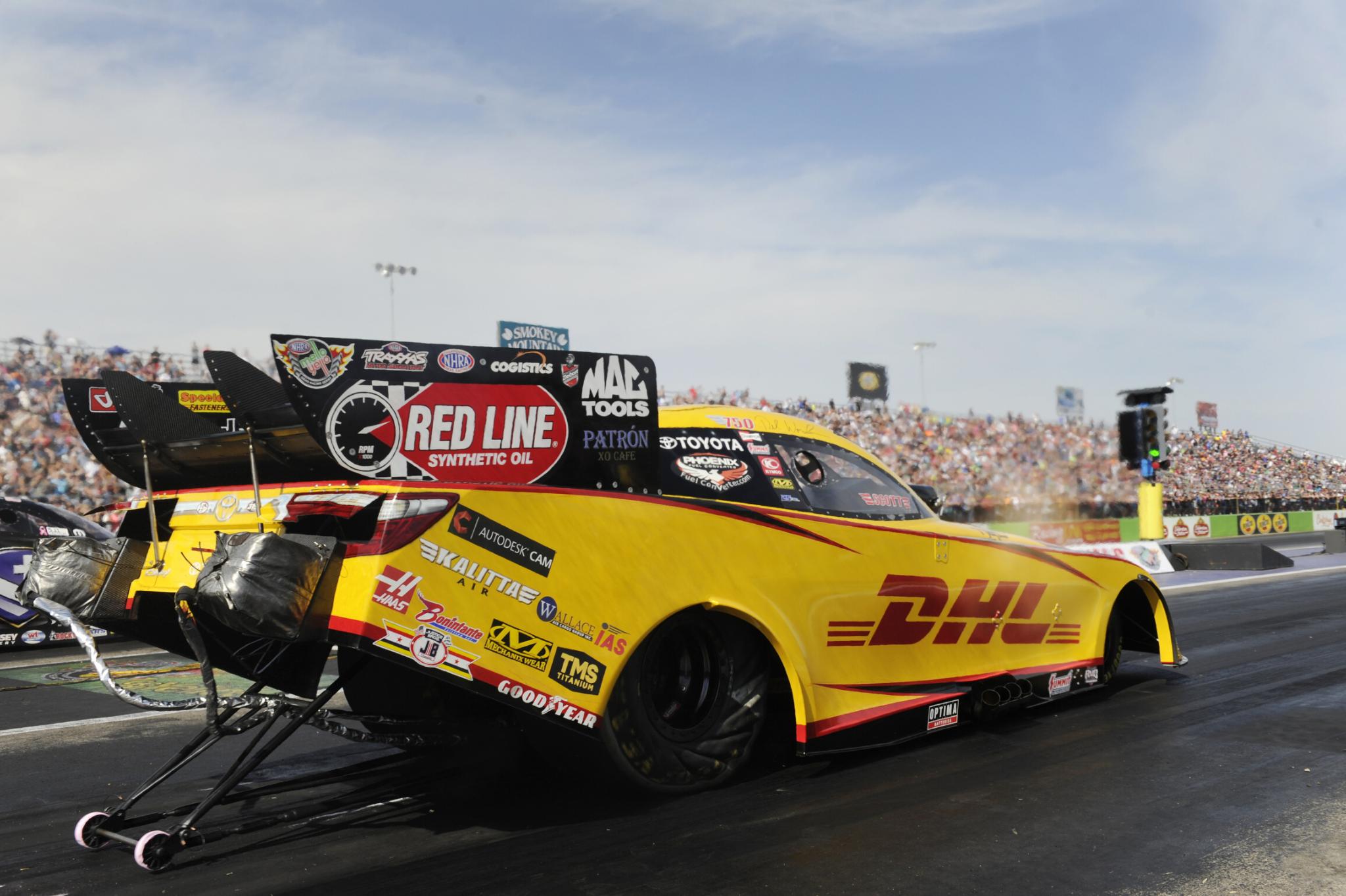 Current Funny Car points leader Del Worsham held on to the No. 1 qualifying position on Saturday at the AAA Texas NHRA Fall Nationals.

Dave Connolly (Top Fuel), Drew Skillman (Pro Stock) and Jerry Savoie (Pro Stock Motorcycle) will also start as No. 1 seeds at the 22nd of 24 events in the 2015 NHRA Mello Yello Drag Racing Series season and the fourth of six races in the NHRA Mello Yello Countdown to the Championship.

Worsham's track record 3.917-second pass at 323.58 mph on Friday night in his DHL Toyota Camry was enough to carry him to the No. 1 spot heading into Sunday's eliminations. This is Worsham's first No. 1 qualifier of the season and 17th of his career (10th in FC.) He is looking for his third victory at the Texas Motorplex, located just outside Dallas. Worsham will face John Hale in Sunday's opening round.

"That was a great run," said Worsham, who opened the Countdown to the Championship with back-to-back wins at Charlotte and St. Louis. "Really, all weekend we've run well. Coming here and getting down the track all four runs definitely helped up the confidence. We're looking good. We pretty much accomplished everything we needed to accomplish. As far as qualifying goes and getting ready, I'm feeling good about the car."

Title contender Jack Beckman raced his Infinite Hero Foundation Dodge Charger R/T to the No. 2 spot with a 3.919 at 323.97 on Friday. Beckman, looking for his first win in Dallas, will face Tony Pedregon in the first round.

Defending world champ Matt Hagan is the third seed with a 3.921 at 323.42 in his Pennzoil Dodge Charger R/T and will race Blake Alexander. Robert Hight qualified fourth while Ron Capps is fifth.

Connolly powered his C&J Energy Services dragster to a 3.744 at 329.18, both track records, during Friday's night session to earn his first career No. 1 qualifier in Top Fuel. Connolly, who won this race last year in Pro Stock and is in his first season in Top Fuel, earned his ninth No. 1 qualifier overall.

"When I was up here yesterday, I didn't want to say anything about it and jinx anything," said Connolly, who will go up against Jenna Haddock to open eliminations. "We had some overcast weather today, and the track has been incredible all weekend. Billy [Torrence] came close on the first run. We were fortunate to hang on to it. We were a little aggressive in Q3 and had a big motor explosion, so we made a planned early shutoff in Q4 and ran good up to that point. We're really looking forward to tomorrow."

Billy Torrence powered his Capco Contractors dragster to the second starting spot following a 3.746 at 327.27. Torrence, who hails from nearby Kilgore, Texas, will face Kebin Kinsley.

Brittany Force, who entered the event third in points, qualified third with a 3.749 at 326.71 in her Monster Energy dragster and will race Terry McMillen to open eliminations. Shawn Langdon qualified fourth while Steve Torrence and Richie Crampton will start fifth and sixth respectively.

Points leader Antron Brown is the seventh seed while defending event winner Tony Schumacher, who is second in points, will begin race day as the No. 8 qualifier.

Skillman pushed his Ray Skillman Chevy Camaro to the No. 1 qualifier with a 6.471 at 213.47, achieved during the first session of the day. Skillman, who claimed his first win at St. Louis last month, will race Deric Kramer in Sunday's first round.

Jason Line powered his Summit Racing Equipment Chevy Camaro to the second starting position with a 6.471 at 213.40. Line, a two-time winner at Dallas, will face Alan Prusiensky.

Bo Butner earned the No. 3 position with a 6.475 at 213.23 in his Butner Auto Chevy Camaro and will go up against John Gaydosh in the first round. Defending world champ and current points leader Erica Enders will start fourth while Greg Anderson, who is second in points, will race as the No. 5 seed.

Savoie rode his Savoie's Alligator Farm Suzuki to the No. 1 qualifier in Pro Stock Motorcycle and the quickest pass in Suzuki history with a 6.765 at 197.74 during the final session. This is Savoie's second No. 1 qualifier of the season, first at Dallas and third of his career. Savoie, who is looking for his third win of the season, will face Scotty Pollacheck in the opening round.

Eddie Krawiec, who is second in points and has one career win at the Texas Motorplex, qualified second with a 6.816 at 195.00 on his Screamin' Eagle Vance & Hines Harley-Davidson. He will meet Angie Smith in round one.

Chip Ellis qualified third on his Junior Pippin Trucking Buell with a 6.824 at 195.17 and will battle Michael Ray in the opening round. Steve Johnson and Karen Stoffer will start as the No. 4 and 5 seeds respectively.

Current points leader Andrew Hines will race from the No. 6 starting position.

Eliminations for the AAA Texas NHRA Fall Nationals are scheduled for 11 a.m. on Sunday.