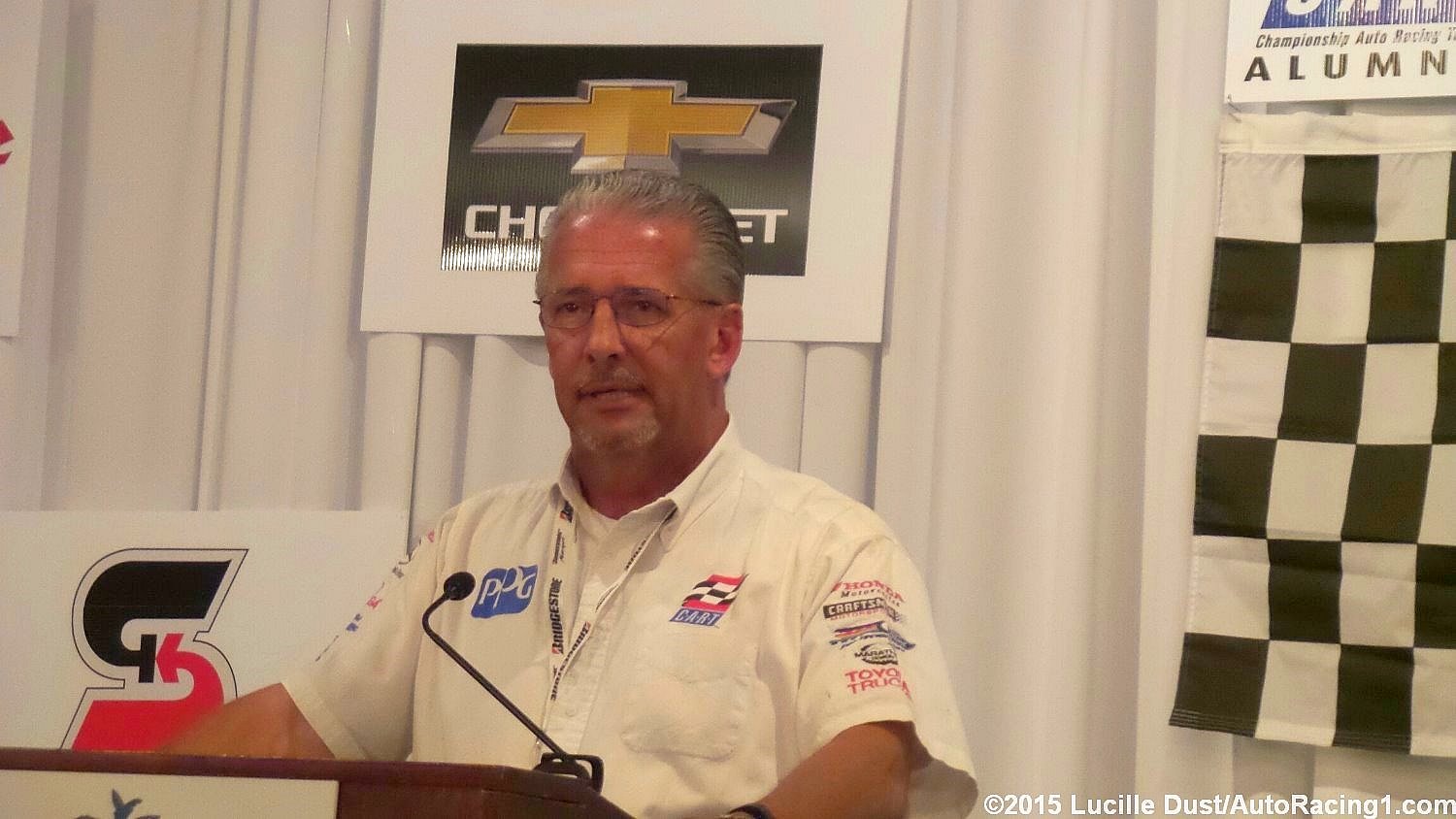 The greatest era in the history of IndyCar Racing was the CART/Champ Car era from 1979 until 2007. IndyCar racing was before, and has been ever since, a series trying to find its direction.

As the 2nd evening of the CART reunion was winding down, Paul Leyton, President & Treasurer of CART Reunions, sat down with me to review the inaugural gathering of former officials and key members.

AR1: What to do think of the success of the reunion?

Paul: On behalf of the committee, we are extremely pleased with the inaugural event. The turnout has been very good for event number one. Seeing the smiles on faces and the reactions of the people. A very minimal amount of complaints about the organization of the event, to the decorations, to the food. I honestly don't think we could be any happier for an inaugural event.

AR1: How do you think you will run another reunion?

Paul: That remains to be seen. One of the key elements was that the organization was named CART reunions, plural, .org. It is not our intention to be a one and done. It is definitely our intention to do more events. Asking as to the structure, to whether or not we will do another reunion in Indianapolis next year or if we plan it biannually. We organized this to the best of our ability and our best guess. We are awaiting feedback from the surveys the attendees have filled out. Given the success and the reaction to the first one, I think you will see another event relatively soon, next year possibly at this time.

But, it was the first time this was done, I don't think we will have any trouble garnering support for another event soon. We will go from there.

[adinserter name="GOOGLE AD"]AR1: Do you think with all the good feedback from all that attended this year, we will double the attendees for next time?

Paul: I certainly hope so. The one area of disappointment is there was a bit of confusion out there first as to whether or not we were allowing or wanting or accepting registrations from team members. Some of the wording on the original publication was a little confusing. And we have learned our lesson. We are a young group in terms of you have to learn from your mistakes. And I would actually classify that as a mistake. We did not word that correctly. We will make it clear from the onset, if we do this again, that every member of the CART family, no matter what level you worked, is welcome. This is something that is extremely important. Any source that can help me get this word out will be greatly appreciated. There are many people from the CART family now working in IndyCar. They are not excluded because they are IndyCar. They were a member of our family. I don't care if they are team members, team managers, or they own a team. If they were a member of the CART family, they are more than welcome to come to our events. I wanted to make that distinction very clear.

AR1: Can you explain the CART Alumni Foundation?

Paul: The CART Alumni Foundation has been formed so that when we have an event like this, we would able to make a little bit of a profit, whatever we define a little bit of profit as, to be able to give something back to the racing community. Be it a racing charity, a racing family in need, be it the need for equipment, especially in the area of safety. We don't want to sponsor scoreboards. Something that would benefit the racing community as a whole. If we can give something back, we will.

The foundation is completely separate from the organizing committee for the distinct purpose that they don't know how the event was setup and who was solicited for money. We don't want there to be any bias in any way. There will be a representative from the organizing committee in a non-voting position on that committee to answer questions or to offer some guidance. We will tell them what we have available to donate and the foundation committee will sort this out themselves and make a recommendation to us. I am sure it will be a well thought out decision based on the people that have been selected. We will approve it and then disburse the money.

Some of the profit from this event will be donated to the Justin Wilson Children's Fund.

AR1: Would drivers also be invited to these events?

Paul: Absolutely, the only drivers we had here tonight were Pancho Carter, Tom Bagley and Wally Dallenbach. Yes, there were drivers invited. I think we needed to get one event under our belt. And they needed to see that this was not just a little party. They are also a part of the family and most of the drivers that we would seek to attend would be from the CART era though 2008. I don't care if somebody from beyond that attends, they are all racers. And that is one of the things we wanted to emphasize. This organization does not want to operate with boundaries. If there is a driver that only raced after 2008 and really wanted to attend, we would not close our doors to them.

AR1: With the running of the 100th Indy 500 in May, would the CART Alumni be planning an event for May?

Paul: To say that there is no possibility is wrong. We are not in a position to say tonight. But that is an IndyCar event and this is CART. We would not want to do anything to diminish their 100th running and distract from that in any way. We would discuss with them if we wanted to plan something. But the last thing in the world we want to do is ruin someone else's special time.

AR1: Would there be the possibility of combining the CART reunion with another event, like the Dan Wheldon karting event?

Paul: There are all sorts of possibilities. I can't answer to anything specific at this time. We needed to get through these 2 days, which I think we have done OK on. Then the organizing committee will meet this coming week to do shakedown. Then we are going to take a couple of weeks off. We had a lot of long conference calls on Tuesday nights. Everyone on the organizing committee deserves a few weeks off. As we move into the winter, we will start talking about what we want to do next.

I would like to say thank you to all of our sponsors. We very much appreciate their generosity. Honda, Chevrolet, Firestone Racing, Performance Tire Service Company, Safety-Kleen, Target Chip Ganassi Racing, Team Penske, The Craig Company LLC and The Palms Banquet and Conference Center. A special thank you to Autoracing1.com for offering the attendees a discount and for your presence at the event. I hope that anyone that did not attend this year, reads about it on AR1 and will consider attending next time. Lucille Dust reporting for AutoRacing1.com