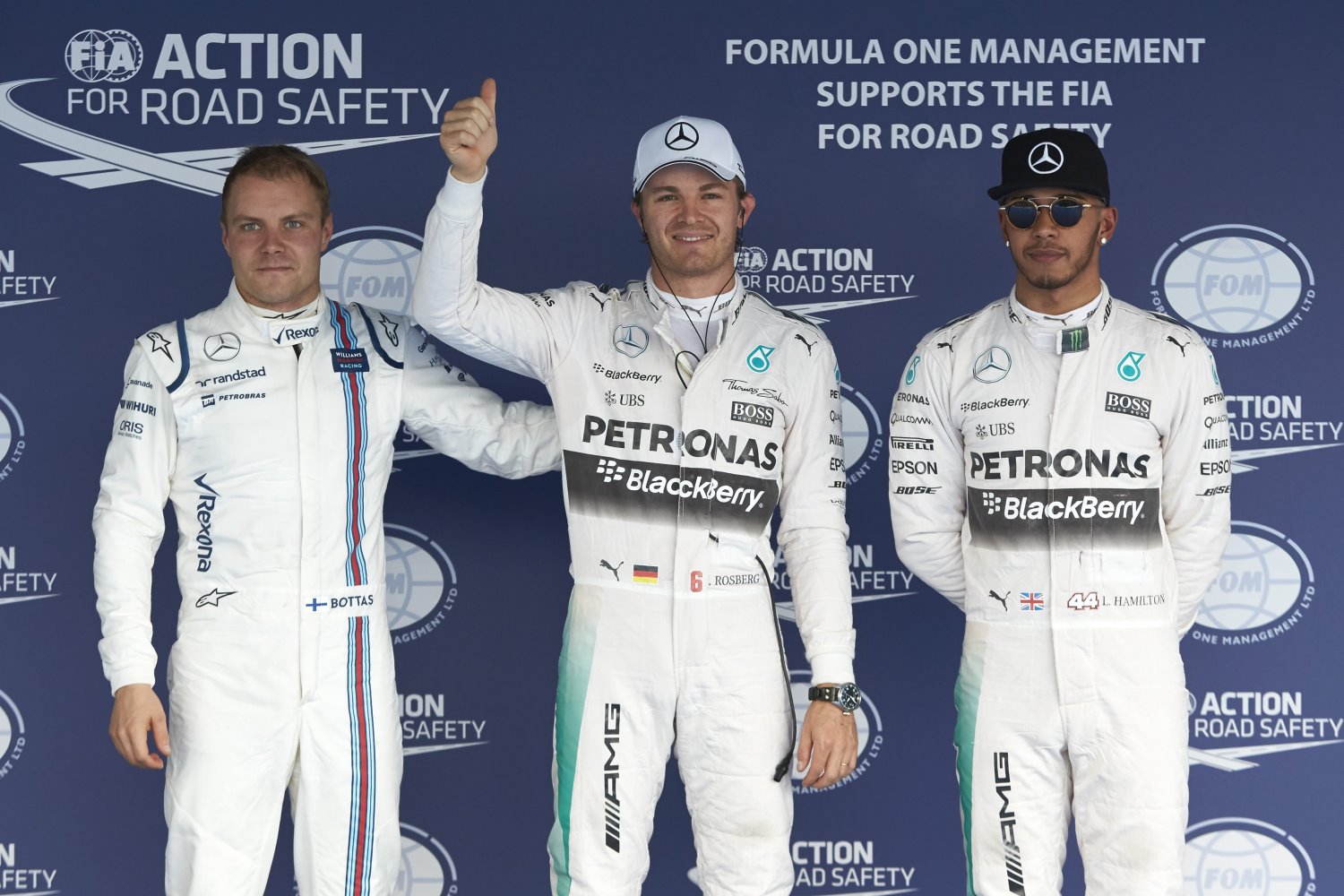 Nico, you were fastest in Q1 and Q3, fastest after the first run in Q3, on pole by a decent margin. Are you pleased with that?
Nico ROSBERG: Yeah, for sure, I’m very happy. It’s been a difficult weekend actually, because of the little running that we got; we didn’t get much practice. Qualifying worked out really well; found a good balance on my car, thanks to my engineers as well. We had to guess a bit where is it going to be and it all worked out well. I felt comfortable, so got some really good laps in and I’m very happy with that.

Very well done. Lewis, obviously you were trailing your team-mate after the first part of Q3 and then you didn’t go for the extra lap at the end. Why not? And I saw you looking around the Ferrari afterwards, did you learn anything from it?
Lewis HAMILTON: No. I did go for my second lap; I just didn't finish it. I made a mistake at Turn 13 I think it is. Yeah, a difficult weekend I think for everyone. Nico did a great job on his lap. I wasn’t quite perfectly happy with the balance that I had. But overall really happy. I think it’s great for the team and yeah, as you say last year this is not such a bad race for P2.

OK, thank you for that. Valtteri, you matched your result of last year, do you feel you have the measure of Ferrari this weekend?
Valtteri BOTTAS: Well, it seems like it, at least today. We were quite competitive. It's good to be third; it’s a good place to start here. Obviously it has been a tricky weekend for everyone but I really think we managed to use Practice 3, well, part of it, what we had, pretty well. I managed to get some good laps in qualifying, consistently, and I pleased with the laps and what we did as a team.

[adinserter name="GOOGLE AD"]Well done. Coming back to you Nico, obviously you’re going for the Constructors’ Championship tomorrow, trying to clinch it here for the second year in a row, but have you personally got a plan for worked out for Turn One. Lewis referenced it I his answer, after what happened here last year.
NR: No, not yet. I haven’t thought about that yet. At the moment just enjoying being on pole and I’ll dig into that this evening or tomorrow morning to work out a plan for that. Of course the Constructors’ Championship is a really important target for us this weekend – it would be amazing to clinch it for the second time so early on in the season – so we’re out to do that, but at the same time, of course, I’m out here to try to reduce the gap to Lewis in terms of points.

Nico, you mentioned in your first answer about the lack of running this weekend, the really unusual situation. We had it in Japan but even worse here because of the curtailed Free Practice 3 after Carlos Sainz’s accident. So what have you been able to find out in terms of long runs with this much softer tires than last year here in Russia and how much guesswork is going to be involved in strategy and race performance tomorrow?
NR: Well, we tried to prepare as best we could. So this morning we did do some high fuel running, everybody did. So we do have an idea of how it’s going to be tomorrow, so it’s not completely just guessing. No, we’re quite comfortable that we know what to expect and strategy-wise we think we have got a good strategy, so it should be fine.

Lewis, I wonder if you could give us your view on what happened this morning – the accident of Sainz and going under the barriers? Your thoughts on that speaking on behalf of the drivers?
LH: To be honest I don’t know anything about it, so I couldn’t really comment. I’m just glad he’s OK.

Q: OK, well I’ll throw a question maybe you can answer. You obviously mentioned the fact you are quite happy to start in second place, based on what happened here last year. So, obviously today didn’t work out for you in the single laps but from the little that you’ve been able to learn from the high-fuel running, do you think you’ll be able to challenge for the win tomorrow.
LH: I wasn’t saying I was happy, I mean I have no choice of being second right now, obviously Nico did a better job in qualifying but I feel there’s still all to play for, as you’ve seen in many other races where I’ve started second. I think it’s exciting. It makes the race ever more exciting and, as I’ve said, Turn One, it’s a long, long way down to Turn One. Probably one of the longest ones of the whole year so it should create opportunities. But there are other opportunities throughout the race as well.

[adinserter name="GOOGLE AD"]Q: Coming to you Valtteri, obviously both these gentlemen managed to get through Q1 without using a set of Supersoft tires, just showing the performance that they have. A lot of your competitors struggled, it seemed, to get temperature into the tires today as the temperatures actually came down during the course of the qualifying session. Is that something you struggled with – and can you articulate what it was like to use these tires here today?
VB: Yeah. We already saw last year it’s quite tricky to get tires to work in the first timed lap, and that’s why you could saw many people doing many laps and longer running in qualifying than normal. What we did in the practice and in Q1 also, we just tried to learn more about the tires so we’re sure we’re making the right decision what we’re going to do in Q3 in terms of tire temperatures, pressures and how many laps we do. So I think everyone struggled with it today – but we got it right. We got the max out of the car and the tires.

Q: (Andrea Cremonesi, La Gazzetta dello Sport) Question for all of you about the accident of this morning, car that went through the barrier. Would like to know if you’re worried about it: the dynamic of the accident. The car was inside of the barrier.

We’ve already asked Lewis that question so we’ll start with Nico.
NR: I haven’t seen it so difficult to comment. Of course we always need to push to improve things. Apparently it’s not good, not ideal, so let’s see if we can make progress on that.

Valtteri?
VB: I haven’t seen it either, so can’t really say that much. Like Nico, we always need to keep pushing on the safety.

Q: (Livio Oricchio – Globoesporte.com) Nico, in the last race you were very conservative at the start and maybe that was one of the reasons you lost the victory. How do you plan your start tomorrow?
NR: On the one side I don’t agree with your opinion – but that’s OK. On the second, just work on it tonight and tomorrow. Work on the start, get everything right there, look at last year’s start, learn from that. That’s it.

Q: (Andrea Cremonesi – La Gazzetta dello Sport) To both of the Mercedes drivers: you were very aggressive – Hamilton was very aggressive – here last year and you were very aggressive also in Japan. I would like to continue on this matter, to know that if, as you have this goal tomorrow [the Constructors’ Championship] does it change you approach for the first corner?
LH: You said I was aggressive here last year? Here? I don’t remember being aggressive. But whatever I did last year it worked so I plan to stay the same really.
Q: I think the point of the question is that you have had a few starts where you have been quite close, not least the last one in Japan and as you’ve got the Constructors’ possibly tomorrow, is it going to change your thinking going into the first corner. For both of you.
NR: No. Nothing changes anything. It’s one way and that’s it.

Q: (Livio Oricchio – Globoesporte.com) In Q1, only Lewis and Nico were on soft tires, all the others were on supersoft tires. Is this some kind of reference that we can expect in the race?
NR: Looks like we were especially quick on the soft which is always a good thing of course in the race, because everybody has to use them once so that can only help us.

Q: You’re expecting this to be a one-stop race tomorrow then?
NR: I don’t know about the strategy yet. That’s look into that this evening.
LH: Yeah, very strange coming into the weekend – people were making assumptions that we would have a repeat of Singapore. Obviously I had no idea what it’s going to be like and to think that now we have it the other way round it’s very, very strange. I don’t have answer for it but the car felt good otherwise on the tires today. I don’t know how it will be for the race. I think from our short long run, the seven laps that we might have got, we have to take information from that, but it didn’t feel bad.

Q: (Heikki Kulta – Turun Sanomat) Valtteri you were a very consistent third in every session; was this your strongest qualifying hour of the season?
VB: Well, I think compared to the number of laps I’ve got and everyone has yesterday and today it was not bad from my side. I felt very good. I could have been feeling very good in the car all weekend and managed to do multiple laps in a very consistent way without any mistakes. Yeah, I can be happy for the session but it’s difficult to say if it’s the best or one of the best.