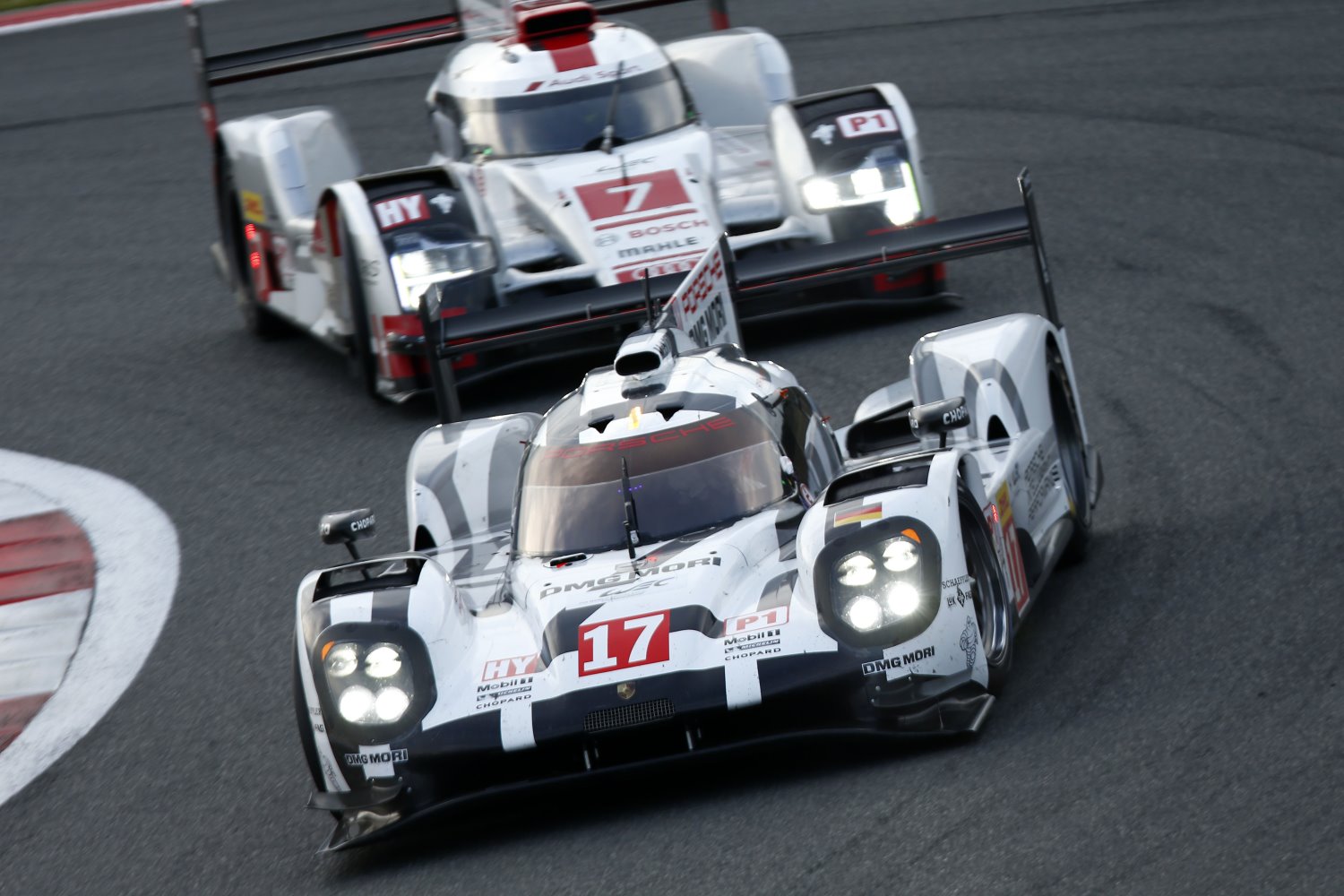 Through the sixth round of the 2015 FIA World Endurance Championship no car other than a Porsche 919 Hybrid made it onto the front row of the grid. On the Fuji Speedway in the Japanese Alps Timo Bernhard (DE)/Brendon Hartley (NZ)/Mark Webber (AU) will start from pole position. The sister car of Romain Dumas (FR)/Neel Jani (CH)/Marc Lieb (DE) qualified second for Sunday's six-hour race.

Each trio now has three pole positions to its tally in 2015. In the WEC the average of the best laps of two drivers counts for the grid position. In Fuji Bernhard/Webber (1:22.763 minutes) and Dumas/Lieb (1:23.071 min) were the qualifying drivers.

With this race on the challenging 4.549 km long circuit at the foot of Mount Fuji the championship enters its critical phase and Porsche is fighting for both titles. In the manufacturers' standings Porsche leads with 220 points, followed by Audi (186) and Toyota (101). In the drivers' championship an Audi trio is leading. Bernhard/Hartley/Webber (103 points) are ten points behind and Dumas/Jani/Lieb are in third place (77.5 points). Further excitement is in the air with a change of weather conditions being the forecast for race day.

[adinserter name="GOOGLE AD"]Quotes after qualifying:
Fritz Enzinger, Vice President LMP1: "The sixth pole position in the sixth race, plus having P2 for the sixth time as well – you cannot ask for more in qualifying. Tomorrow we want to get both crews onto the podium. It is our target to extend the lead in the manufacturers' championship and improve the situation in the drivers' standings. For the race some unpredictable factors will come into play. First, because of the weather, and second, because Audi has become stronger. Excitement is guaranteed."

Andreas Seidl, Team Principal: "It is great we have managed to continue our string of successes in qualifying, especially because Audi was very fast here, which we had expected after they had been good in the practice sessions. We have continuously improved our cars and all our drivers again showed excellent performances. For tomorrow we expect very close racing. It is going to be a real challenge for us – not only because of the competition, but also due to the weather. For the first part of the race at least rain is predicted."

Alexander Hitzinger, Technical Director: "As expected, Audi came closer. One of the reasons is that aerodynamic downforce counts less on this particular circuit, which means that tire management plays a bigger role."

Drivers Porsche 919 Hybrid number 17
Timo Bernhard (34, Germany): "We are very happy with our pole position. Mark did a super lap and mine was also good. I lost a little bit of time in sector one. It wasn't much, but the competition is very close here. The sister car, as well as the Audi, was very strong."

Mark Webber (39, Australian): "P1 and P2 is another great team result. Normally qualifying has been a very strong point for us, but today we had a lot of pressure from the number 7 Audi. It was a big effort from us today. Timo did a very good lap and it was great to see Marc getting the sister car on the front row in the very last minute."

Drivers Porsche 919 Hybrid number 18
Romain Dumas (37, France): "P2 was the maximum we could achieve today. My lap was good, so I cannot complain. Perhaps I lost a little bit when braking into turn one, as the brakes were colder than expected."

Marc Lieb (35, Germany): "We wanted to save tires for the race, that's why I took the used ones from Romain first. But the competition was too strong. In the end I had only one lap left with a new set of tires and that had to be perfect. I managed to improve, but had a lot of traffic, otherwise I could have gone faster."