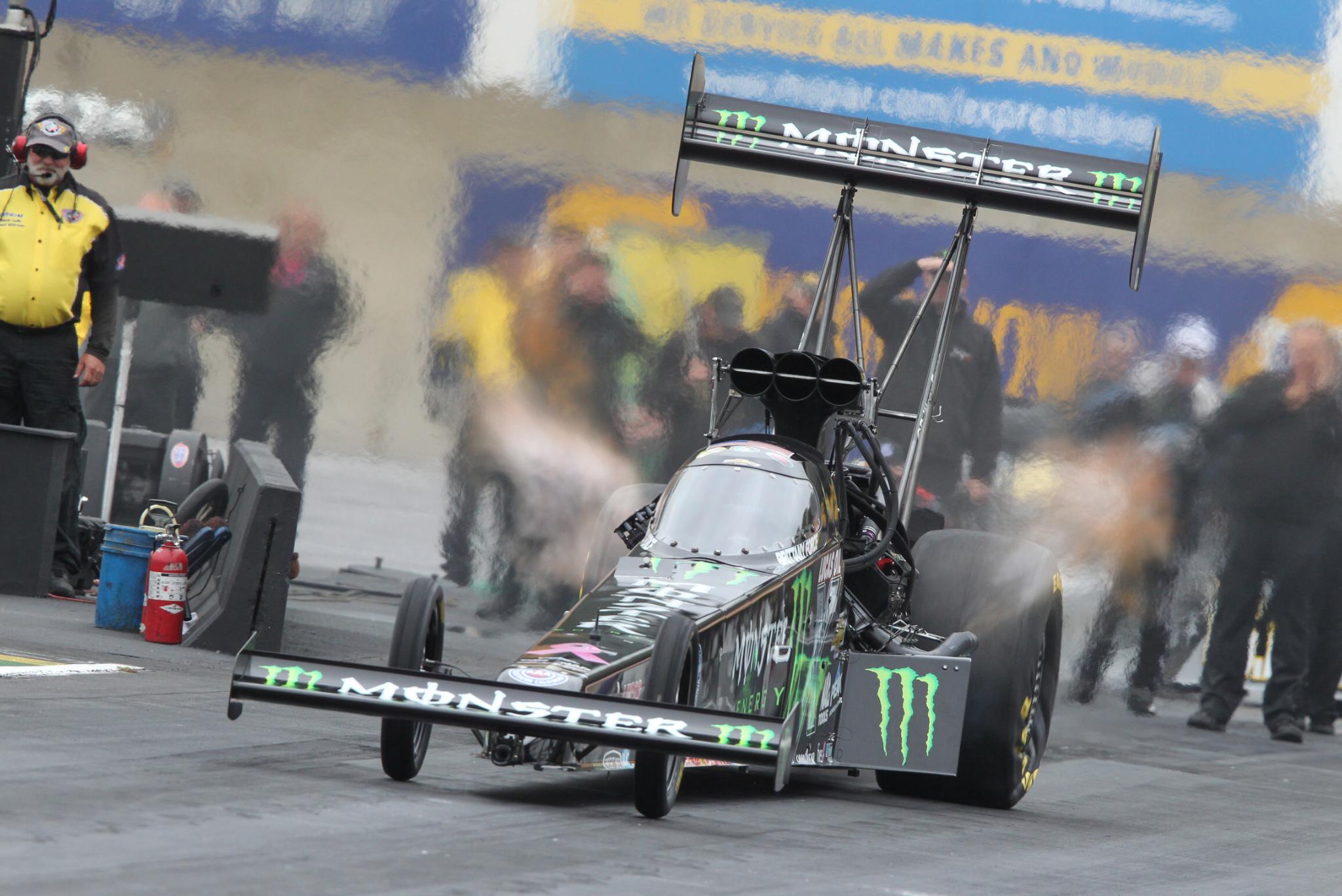 Brittany Force ran career-best numbers to claim the No. 1 qualifier in Top Fuel at the NHRA Keystone Nationals.

NHRA officials were forced to cancel the second session of qualifying on Saturday due to persistent showers. Sunday’s eliminations are still scheduled for 11 a.m.

Force recorded a 3.725-second pass at 331.53 mph in her Monster Energy dragster. The run gives Force her first No. 1 qualifying effort of the season and fourth of her career. She will race fellow Countdown contender Dave Connolly in the first round. Force, who reached the finals last season at Maple Grove Raceway, is searching for her first career victory.

"It’s definitely tough going into tomorrow with one run," said Force, who entered this weekend fourth in points. "We put down an awesome run that I wasn’t expecting. We drove right through the conditions and put an awesome number on the run. I thought we were going to struggle. Our last record was here to so we obviously like Reading."

Leah Pritchett drove her Sparkling Ice dragster to the No. 2 qualifying position following a 3.787 at 320.74. She will face Shawn Langdon in round one. Clay Millican qualified third in the Parts Plus/Great Clips dragster and will matchup with Countdown contender and current points leader Antron Brown. Countdown contenders Tony Schumacher and Richie Crampton will start as the No. 4 and No. 5 seeds.

In Funny Car, Hight drove his Auto Club Chevy Camaro SS to a 3.922 at 329.34, both track records. Hight, the 2009 world champ, earned his first No. 1 qualifier of the season, first at Maple Grove Raceway and 47th of his career. He will open eliminations against John Hale.

"You don’t get a lot of chances to run under conditions like this," said Hight, the 2011 Reading winner. "It was kind of like the perfect storm. We hit everything just right. It’s what you have to do to have a run like that."

Ron Capps drove his NAPA Auto Parts Dodge Charger R/T to the No. 2 qualifying position after a 4.218 at 318.17. Capps, who is searching for his first Reading win in his illustrious career, battles Paul Lee in the first round.

Skillman claimed the No. 1 qualifier in Pro Stock following his 6.509 at 213.13 in a Chevy Camaro. The run gives him his second career No. 1 qualifying effort of his career. Skillman, who earned his first career win at the most recent event in St. Louis, races V Gaines in the first round.

"As long as we have a little sun to put a little heat in the track, we will be fine," said Skillman about conditions for tomorrow. "They will be able to work on the track tomorrow and we will be fine. They [NHRA Safety Safari] fought it all day long. It’s just the conditions we’re in."

Chris McGaha qualified in the second position with a 6.514 at 213.03 in the Harlow Sammons Racing Chevy Camaro. McGaha, a two-time season winner, faces Val Smeland in the first round.

In Pro Stock Motorcycle, Krawiec earned his fourth No. 1 qualifier of the season after riding his Screamin’ Eagle Vance & Hines Harley-Davidson to a 6.802 at 193.60. Krawiec, a three-time world champ, now has 27 career top qualifying efforts and two at Reading. He will race Brian Pretzel in the first round.