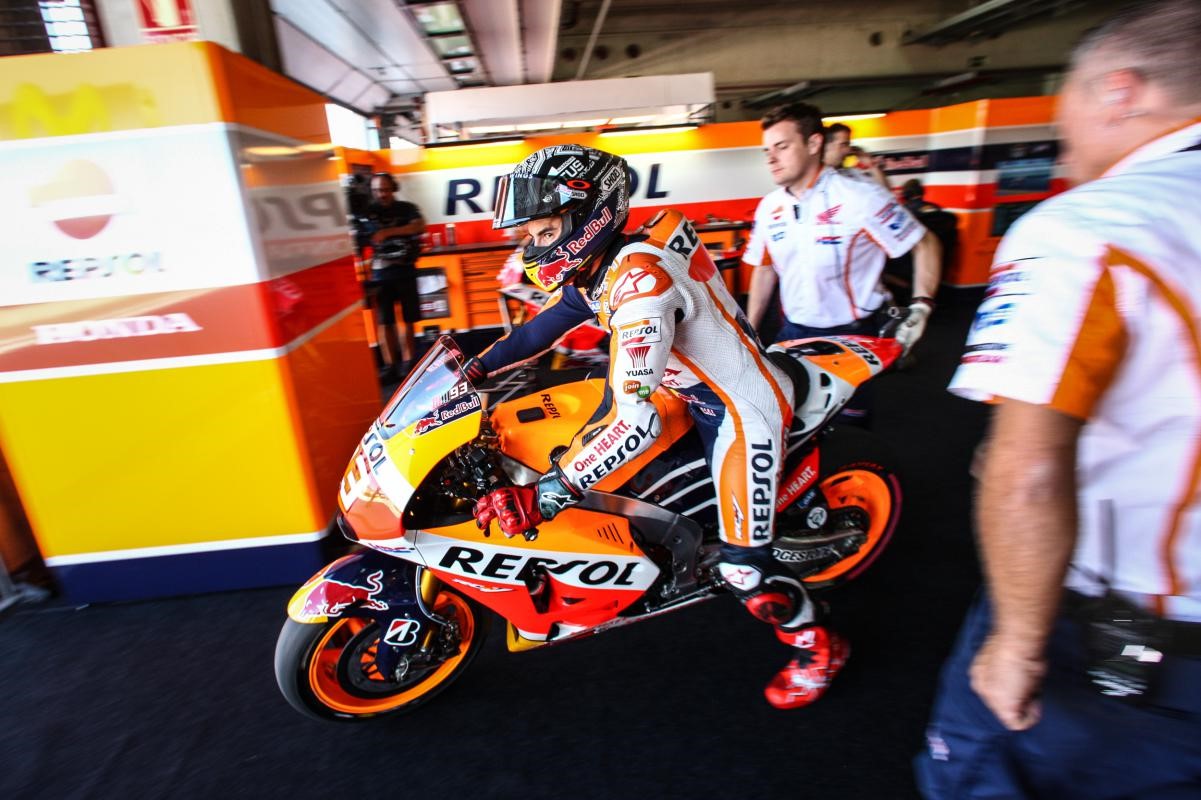 Repsol Honda's Marquez set the fastest ever lap by a MotoGP bike around the 5km MotorLand Aragon circuit as he claimed his 29th premier class pole position in a thrilling Q2 session. The Spaniard made the most of ideal conditions (Track temp. 38ËšC) at the Gran Premio Movistar de Aragon to set a 1'46.635 on his first run to completely annihilate his own 2014 Pole Record (1'47.187) in the process by over half a second. The reigning MotoGP World Champion utilized a two-stop strategy and appeared to be going even quicker on his third run before he lost the front at turn 2, walking away unhurt.

Movistar Yamaha's Jorge Lorenzo, who had earlier topped FP3 after dominating on Friday, was the only rider to get within 0.5s of Marquez. Lorenzo finished 0.108s off the pace of Marquez as he attempts to close the 23-point gap in the standings to his teammate Valentino Rossi. Lorenzo was the only other rider to break the 1'47 barrier as he claimed his 11th front row start of the season and 6th in a row.

Ducati Team's Andrea Iannone pulled off the surprise of the day to complete the front row despite riding through the pain barrier. The Italian re-dislocated his left shoulder in a training accident after Misano but managed to set a time good enough to secure his fourth front row start of the season and first since Mugello. Incredibly though, he was over half a second off the pace off Marquez as 0.543s separated the top three riders.

Monster Yamaha Tech 3's Pol Espargaro (+0.699s) put in a sensational lap to start from the front of the second row in fourth as the leading Satellite rider. This equaled the Spaniards best qualifying performance of the season at Jerez.

Repsol Honda's Dani Pedrosa (+0.722s) had topped the earlier FP4 session but will start Sunday's race from fifth. Pedrosa had found himself on the provisional front row after the first run but could only improve by three-hundredths of a second on his second run and will have to start from the middle of the second row.

Movistar Yamaha's championship leader Rossi (+0.857s) was staring down the barrel of a third row start before he managed to respond on his final lap to set a time good enough for sixth. The nine-time World Champion found himself 0.749s off the pace off his closest rival Lorenzo in what was his worst qualifying performance since Indianapolis.

Team Suzuki Ecstar's Aleix Espargaro made use of the minor engine upgrade brought by his team to Aragon to set the seventh fastest time in his best qualifying performance since the Sachsenring.

LCR Honda's Cal Crutchlow will start from the middle of the third row as he lost out to Espargaro by just 0.001s. The British rider improved from 13th on the combined timesheets on Friday to finish in tenth ahead of Danilo Petrucci on the Octo Pramac Racing Ducati. Petrucci earlier had made it through from Q1 with his teammate Yonny Hernandez at the expense of Andrea Dovizioso on the Factory Ducati who will be forced to start from 13th.

Monster Yamaha Tech 3's Bradley Smith recovered from an earlier crash at turn 5 in FP3 to complete the top ten, while Hernandez and the second Suzuki GSX-RR of Maverick Vinales round out the fourth row.

EG 0,0 Marc VDS's Scott Redding will start form 14th, while Eugene Laverty (Aspar MotoGP Team) is the leading Open class rider in 15th in his best qualifying performance since Argentina. His teammate Nicky Hayden qualified in 15th despite riding with a broken thumb while Australian Jack Miller will start from the middle of row seven in 20th.