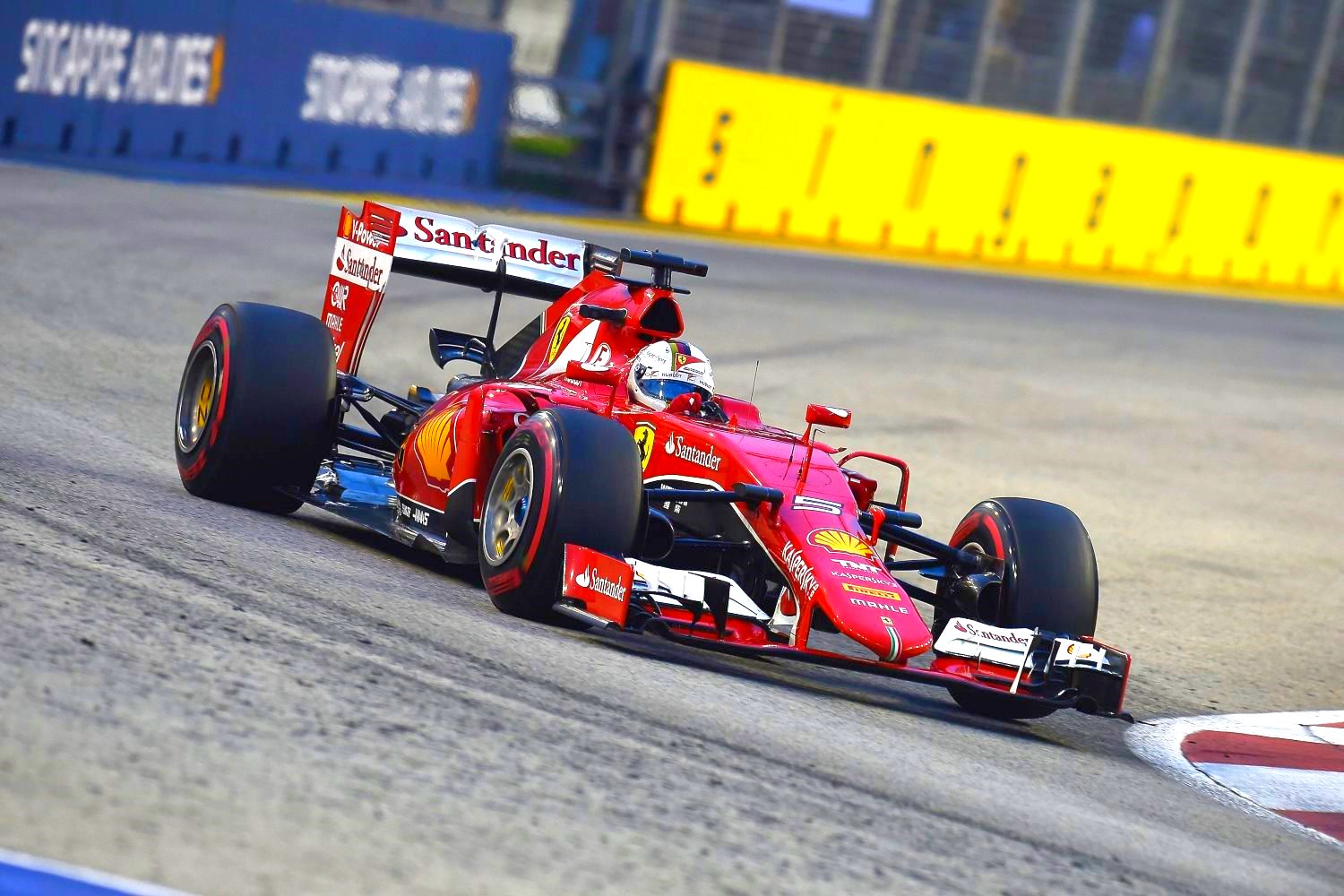 Ferrari's Sebastian Vettel controlled the pace of the race from the start, pulling away from Red Bull's Daniel Ricciardo at will, and waltzed to his third win of the year in the Singapore Grand Prix.

Kimi Raikkonen came home third for Ferrari ahead of the Mercedes of Nico Rosberg and the Williams of Valtteri Bottas.

It was the 42nd F1 win for Vettel, putting him ahead of the late Ayrton Senna in third on the all-time win list.

The former champion produced a perfect drive to lead from start-to-finish despite the appearance of the safety car on two occasions – including one to slow the field after a person managed to get on the course and briefly walk down the track.

[adinserter name="GOOGLE AD"]Vettel held a slender lead over Ricciardo's Red Bull right to the flag, crossing the line just 1.4s ahead of the Australian, but it was 3.4 sec. before Vettel slowed at the flag to celebrate.

Hamilton, meanwhile, saw his disappointing weekend come to a frustrating conclusion after his Mercedes developed technical issues on lap 23 while running fourth. Dropping him down the order, despite soldiering on for another ten laps, he was eventually forced to call it quits on lap 32 for his first DNF since the 2014 Belgian Grand Prix.

Rosberg is now 41 points behind Hamilton with Vettel breathing down his back just 8 points back.

Vettel made a good getaway at the start to take the lead ahead of Ricciardo. Raikkonen held his starting position to sit in third ahead of Red Bull’s Daniil Kvyat, while Hamilton and Rosberg kept held fifth and sixth position, ahead of the Williams of Valtteri Bottas.

There was trouble for Max Verstappen though. The Toro Rosso driver, who was starting eighth, stalled on the grid and the rest of the field swarmed past him as the grand prix got underway. Verstappen was wheeled back to the pit lane where his car was restarted and he re-joined a lap down.

Vettel meanwhile was flying. By the end of lap two the Ferrari driver was a 4.4s ahead of Ricciardo and after four laps he’d stretched the advantage to 5.2 seconds before Vettel went into cruise mode.

That is when the lap times began to stabilize, with Ricciardo's race engineer Simon Rennie telling the Red Bull driver that "Vettel has calmed down a bit". Ricciardo began to chip away at the gap and took a second out the German over the next handful of laps.

On lap 13, however, the Virtual Safety Car was deployed when Williams' Felipe Massa and Force India Nico Hulkenberg collided and Hulkenberg was pitched into the wall and out of the race.

Hulkenberg was later penalized with a three-place grid drop at next weekend’s Japanese Grand Prix for causing the collision.

When the action resumed Ricciardo kept pace with Vettel and on lap 22 the Australian was 0.8s behind the lead, with Vettel appearing to hold back a bit. Raikkonen was another 0.9s back but Hamilton was beginning to lose touch with the podium positions, slipping to over 2.0s down on the leaders.

On lap 27 Hamilton began complaining of a loss of power and the Briton was swiftly passed by Rosberg and Kvyat.

The team told Hamilton that his throttle was failing to open completely but that there was no electrical problem. Hamilton responded that he could not feel any pedal issue and as the investigation went on Hamilton fell to P11 by lap 30.

Hamilton's race finally came to an end on lap 33. The championship leader had been complaining that the issue was worsening and then informed his team that the brakes were becoming too cold to continue. The team told him to retire the car.

"For me it felt like I was driving at my best in the race. I think I had the pace to win. I did everything. I was on the prime keeping up easily with the guys at the front on the option. My pace was really good when I started to lose power. I felt like the team was working as hard as they could and these kinds of things just happen.

[adinserter name="GOOGLE AD"]"It's unfortunate for the team as I was feeling real good out there, so optimistic. But it was better to retire and save the engine. We will work really hard on figuring out what it was but I am not worried about losing this engine. Our reliability is really high as we had an amazing season so far. It's still a long way to go and I know I lost some points today, but I was fast and on form and I will make sure I bring that out to Suzuka to fight back!"

On lap 37 the Safety Car was deployed again because of a spectator walking on the track, which is certain to draw a fine for the race promoter from the FIA.

All of the field to made another pit stop and when the order sorted itself out under the Safety Car Vettel still led from Ricciardo and Raikkonen but Rosberg was now fourth ahead of Bottas with Kvyat sixth. Perez was now seventh in the sole remaining Force India, with Grosjean eighth ahead of teammate Pastor Maldonado.

When the action resumed, Vettel this time showed Ricciardo who was boss and powered away, with the German rapidly building a two-second gap to Ricciardo in one lap. Further back Button tangled with Maldonado as they battled for P9 and the Briton clipped the back of the Lotus, losing his front wing in the process. He pitted for a new wing and re-joined in P14.

Toro Rosso's drivers, meanwhile, were charging, with Verstappen passing Maldonado for P9 and with Sainz repeating the moved almost immediately afterwards. Verstappen then set the fastest lap of the race so far on lap 43 of the 61 scheduled.

The Dutch teenager then passed Grosjean for P8 on lap 47 with an excellent move into Turn 16. Sainz followed but his move was riskier and both drivers went over the curbs on the exit, with Grosjean complaining that he had been forced wide and had “no place to go". The move stood, however, and Sainz held ninth.

Verstappen's next target was Perez in seventh but he could find no way past the Mexican. His race ended in somewhat controversial circumstances when his engineer told him to swap places with Sainz in the closing laps. Verstappen refused and held station to claim eighth ahead of his teammate.

At the front the order also remained unchanged, with Vettel taking his 42nd career win.

American Alexander Rossi drove a great race in his debut to come home 14th, but most importantly, beating his more experienced teammate Will Stevens.

An elated Maurizio Arrivabene said, "This is a fantastic win! It's fantastic for Seb, who yesterday put in an awesome qualifying lap, something which reminded me of the great champions of the past. But this result is also fantastic for the whole team, for all the guys here in the Singapore garage, and also for those who work back at Maranello.

"Kimi's third place today clearly shows how important and effective was the development work we carried out on our car. Today we have both drivers on the podium and we're happy with that. And yet, I was not sure that we could make it until we crossed the finish line.

"A race win is something you build step by step, from the start onwards: and on a track like this, full of unpredictables, and with two safety car periods, the real problem was keeping concentration. Now I don't want to make predictions for the championship: there are still may points at stake, and obviously we'll do all that's in our power to stay in front. But always with great humility and a huge respect for other contenders."

A happy Sebastian Vettel said after the race, "It was an incredible race today, in fact all in all an incredible weekend and it is difficult for me now to sum it up.

"The race was intense and long, I had some pressure from Daniel behind me, we were the quickest two cars out there today, but I was able to control the pace and look after the tires, which ran ok for the whole weekend. The car felt fantastic, I could control the gap until the end. Today we are in paradise, but we know we're still a long way to go.

"It has been a surprise that Mercedes hasn't been on the pace this weekend, we don't know why, but to be honest we don't really care. I am very happy for the team today, there has been a lot of work going in since the day I joined in. For the next races we will keep pushing 100 percent, we'll give our maximum, like always. As long as there is a chance we have to go for it, we have to do everything we can. Mercedes are the ones to beat, the best way to do it is looking after ourselves and doing the best we can."

Next up is Japan in one week.