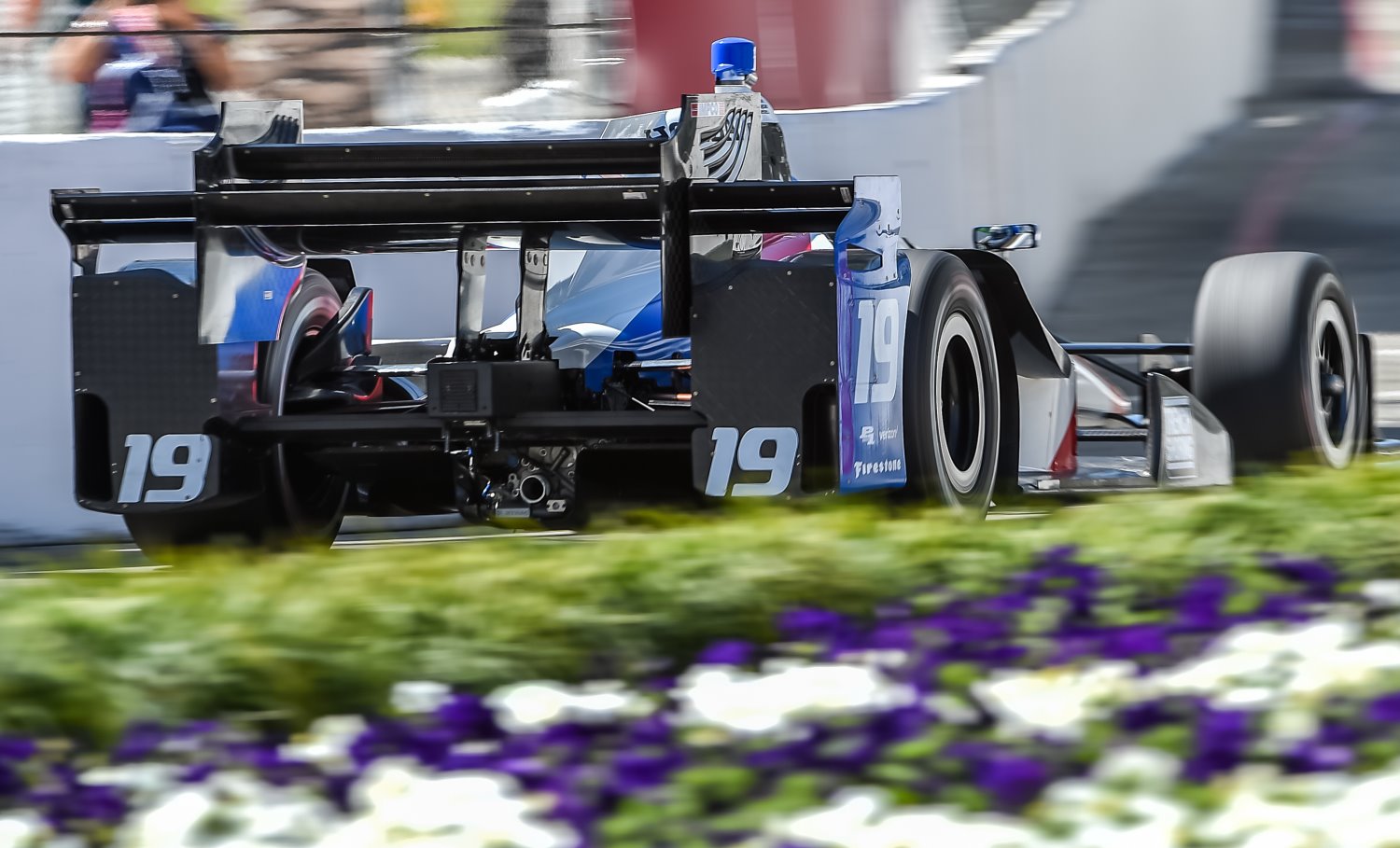 UPDATE Further to what we reported Saturday with regard to common bodykits in 2017 comes this USA Today report by Brant James/USA Today – Officials from IndyCar and manufacturers Chevrolet and Honda are discussing potential 2017 changes for the controversial aerodynamic body kits introduced last season.

IndyCar chairman Mark Miles told USA TODAY Sports on Saturday at the Grand Prix of Long Beach that a uniform kit to be used by both manufacturers is among numerous options under consideration. He hopes to have a plan for next season finalized by the end of May to provide the manufacturers ample design time and maximize developmental expenditures.

“I don’t think aero kits go away," Miles said. “We’ve got them. We’ve learned a lot. Both companies have learned a lot. I think the questions are more from conforming them in some way to continuing the competition between them, what’s the right mode to be in. We’re looking at possibilities from continuing with some shaping of the extent of the competition between them to every other possibility."

Honda Performance Development president Art St. Cyr told USA TODAY Sports in an email that “a variety of options have been presented, and all are worthy of consideration and additional discussion."

On the Michael Shank rumor, he told AR1 he is busy with his other racing and is not sure he will do the Indy 500. He said he has no chassis but could get his hands on one if needed. At the Racer party Saturday night Katherine Legge did not sound hopeful the Indy 500 ride will happen.

A bit quiet Saturday in Long Beach on the rumor mill side, but here is what we heard today. Word is that the Indy 500 seats are, for all intents and purposes, all sold and over 300,000 people are expected for the 100th running of the 500. The question now is whether IndyCar can sustain that momentum for the rest of 2016 and 2017.

We have it on good word that there are serious discussions going on about starting some sort of IndyCar playoff or knockout system to determine the champion. Last year the championship came down to the last race and a playoff system would not have made it any better. However, most sports have a playoff system and fans seem to like them.

We hear that a major campaign is underway in the paddock to do away with the aero kits for 2017. The general mood in the paddock is that the aero kits will be gone after this year. Too expensive and they create a 2-class series. We spoke to Michael Andretti about this and he said, "I told Derrick Walker this is what was going to happen. And the way the rules are our disadvantage is locked in because we are not allowed the make changes to try and catch up."

He went on to tell us that the question is what does everyone run in 2017? If they go back to the Dallara kit there is the issue of the hole in the floor that was added to help stop the car catching flight. The old Dallara aero kit would not have a good balance if you add the hole without making other changes. He said there is also talk of removing the appendages behind the rear wheels (we call them Butt Bumpers) and what would that do to the balance? It's quite possible a whole new aero kit will be needed. While that will be more cost for the teams at least that will be it (no development needed to outdo the others) and all the teams will be on equal footing.

We have further information that it appears very likely the third driver for the KVSH team at the Indy 500 will be Stefan Wilson. We hear they are close to an announcement.

Why was Watkins Glen president Michael Printup in Phoenix for a meeting the weekend of the IndyCar race two weeks ago? With Watkins Glen recently resurfaced and upgraded we hear he may have been there to meet with IndyCar officials about an IndyCar return to this e upstate New York road course circuit.

It would make sense if they agree to keep the date the same from year to year so they can buildup a consistent customer base. If you recall it failed last time because they moved the race to a different date each year.

If they run the race in September they could get a good turnout from the two colleges in nearby Ithaca, NY – Cornell University and Ithaca College. As with the Boston race where we will see thousands of students at the race for a big party, Watkins Glen can do the same with the right promotion.

We ran into Derrick Walker who is now doing some work for the SCCA Pro Series and will have a big role with the Formula 4 series that is coming.

We have yet to find anyone who disagrees with the next generation IndyCar being something like the car to the left – bigger tires, almost no wings and more underbody downforce. It's clean looking and does not have all those ugly aero appendages the current IndyCar (and F1 car) has that make the cars look repugnant.

We hear Mark Miles has a group working on preparing a Request for Proposal (RFP) for the next IndyCar TV deal. If he can't do a deal that puts all IndyCar races on network TV this series will never grow.

Michael Shank was in the paddock with his IMSA team and told racer.com that he has been approached by a lot of people about putting together an effort for the 100th running of the Indy 500 this year. He would have to have an existing team field the car for them.

Next year's Long Beach GP will be early – April 7-9. It moves up a week earlier because Easter Sunday is April 16. Make your reservations. The Phoenix date, which was April 2 this year, is rumored to move to the end of April in 2017 because the NCAA Final Four is in Phoenix on Saturday, April 1 and Monday, April 3. The season opener in St. Petersburg will be March 9-12, 2017. That race is also set for March 8-11, 2018

We spoke with Sage Karam. He said he is bored and he hopes to get back in the car soon for Dreyer Reinbold in preparation for the 500. "I have not turned a wheel since Pocono," said Karam.

Get a load of this – we hear Interstate I-90 will be shut through the center of Boston for the Boston GP. The federal government agreed to shut an Interstate highway for an IndyCar race, a first. We hear there is a big traffic management plan in place and it all works. We shall see. Expect the complaints to be loud. Mark Cipolloni and Lucille Dust reporting from Long Beach