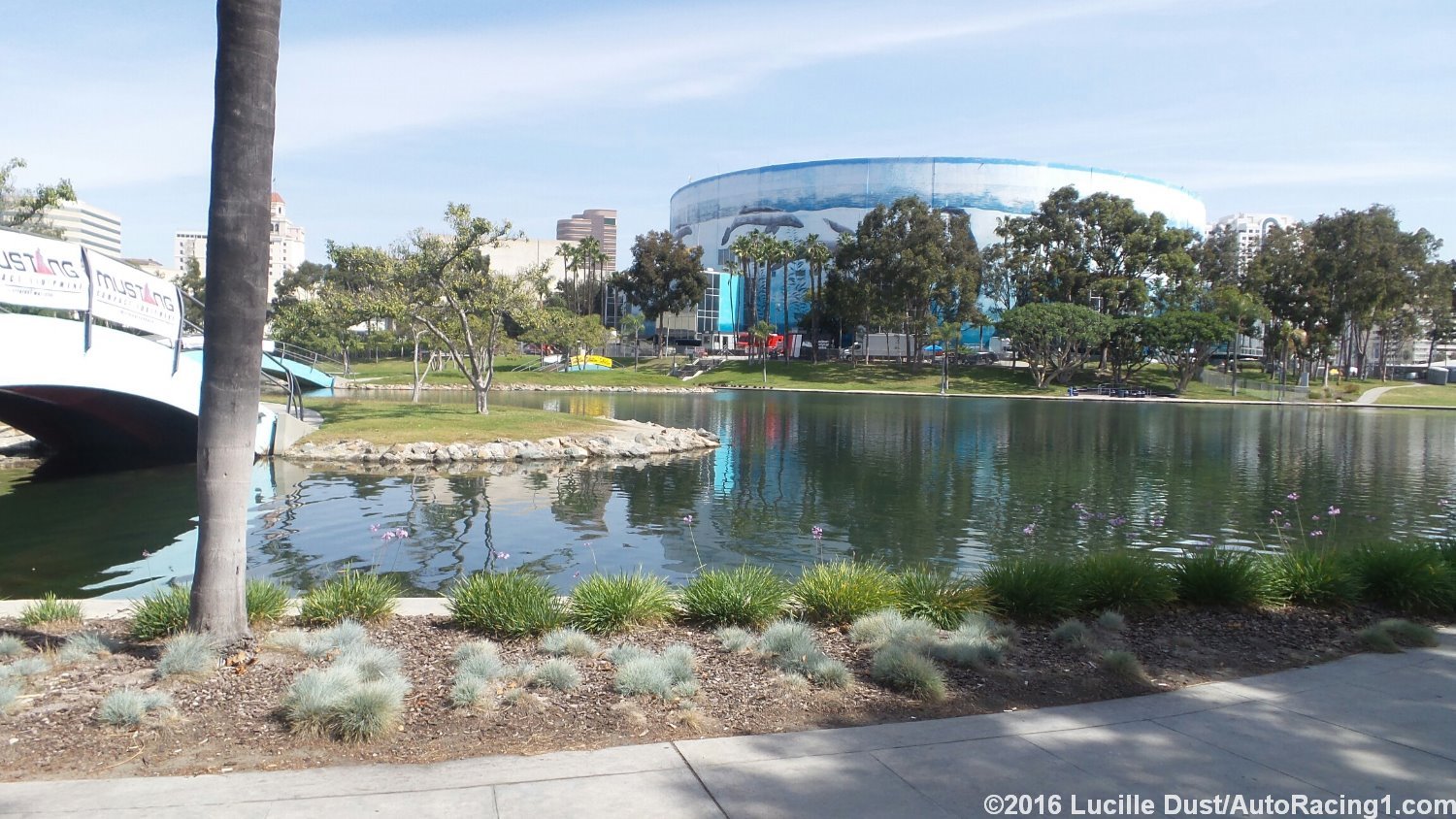 UPDATE We added the image (below) of what we think IndyCar will implement instead of a halo or full canopy – the Red Bull concept of a big windscreen.

The crowd Friday was big, but not the biggest we have ever seen at Long Beach. With that said, it was bigger than any race-day 'oval' track crowd on the IndyCar schedule except the Indy 500, so what does that tell you. We talked to GP President Jim Michaelian who could not quote exact figures yet, but would only say with a smile on his face, "did you see that crowd out there?"

Speaking of big events, we are led to believe a very large crowd is expected for the Grand Prix of Boston despite zero partnership from the city of Boston. How is it that Bernie Ecclestone gets cities to pay $25 to $50M per year to support an event and IndyCar can't get them to cough up even $5M? The answer? The TV numbers. 50 million people watch an F1 race worldwide and that is great publicity for the city. IndyCar put the Boston GP on NBC Sports Network and they might get 0.5M to watch…i.e. little value to the city so why should they help?

We hear that because of the huge crowd expected for the race (look for tens of thousands of college students to be there and consuming a lot of alcohol, listening to the concerts and watching fast cars and hot women) a lot of planning was done on crowd flow. We hear we will see the biggest pedestrian bridge we have ever seen at this race. We also hear there will be suites elevated above the track with cars going underneath, something we have not see for an IndyCar race before.

We hear the average speed around the Boston circuit is expected to be around 115 MPH, which is fairly quick considering the track has a slow 35 mph hairpin.

We ran into Dr. Steve Olvey who is consulting on the driver head protection concepts. He pointed out all the challenges with a canopy over the drivers head, so we are led to believe IndyCar will not go that way, at least not as a retrofit on this car. The Halo obstructs the driver's view on banked ovals so the only solution for now might be raising the windscreen in front of the driver, similar to what Red Bull came up for F1.

In our morning report we talked a little about aero kits and the differences between the Chevy and the Honda kits. In the video below I ask Honda IndyCar driver Graham Rahal his opinion around the entire IndyCar aero kit controversy. Rahal provides some pointed feedback that is sure to resonate (see video below)

On the domed skids, James Hinchcliffe's opinion is similar – "It's never been about manufacturer equivalency for me, it's been about putting on a good show, a good race. I think everybody agrees.

"It's physics. If you put downforce on the bottom of the car, you're going to be able to follow more closely and have better racing. For sure I think the sidewall extensions are going to have a positive effect on the racing.

"I think once we get to the race at Indy on Sunday… The decision has been made. Up to this point, it was up in the air what was going to happen. Now we know what's going to happen. By Sunday we'll have a race to talk about. I think everybody was just bored after Phoenix.

Asked what he thought about the handling of the car with the domed skids, Will Power said, "I just said the day was very windy, so with them on or off, it was difficult.

"I think the racing will be fine, I really do, because ever since we blocked off the rear bumpers, it's created a massive draft. No one will get away. I think it will be the same as last year, it really will.

Are either of you concerned that all the domed skid talk is overshadowing not the next couple races but the month of May itself?

Power responded, "Got to have something to talk about, man."

We have maintained for awhile that the Hondas are towing a parachute around the track on the short ovals, road courses and street circuits and that drag is contributing to the Honda cars being slower than the Chevys on the straights. The Chevys 'Butt Bumpers" are wide open in the back allowing air around the rear tires to flow through with little resistance. The Hondas are almost 100% closed and air has no way to escape causing extra drag.

Of course everyone is fairly tight lipped in the Honda camp but we finally got one of the engineers on a Honda team who has been in the wind tunnel with these cars, and seen how the air flows around the rear tires to give us a hint that our theory is correct. He would not answer anything specific about what I wanted to know, but he gave us this analogy – "when they made us close them off last year at Indy because the Chevys were getting airborne when they turned backward, we all went slower."

Team owner for Honda driver Alexander Rossi, Bryan Herta, said "it's not one thing. Just opening up the back may or may not help. We can run last year's body kit (if we tether them), which was open, but that might make less downforce so they may not benefit."

Herta's biggest grip is that the Honda teams are locked in and cannot catch up. "Chevy did a good job and my hat's off to them. However, the rules should be 100% spec or 100% open. The way it is now our disadvantage is locked in all season and even though we have ideas on how to make the car better we can't."

Whatever it is, the Honda teams think they are losing time to the Chevys on the straights.

You never know who you will see in Long Beach with the close proximity to Hollywood. Danny Sullivan was sighted today walking around the circuit. The 1985 Indy 500 winner has also won here at the beach. We asked if he would be driving in the final Toyota Pro Celebrity race this weekend and he quickly replied, "No, just here checking out the track." I am sure he will also be in Indy next month for the 100th running.

Conor Daly was confident and felt the Hondas were competitive at this track. "I am here to win this race", he stated after I asked how he felt about the track. "Tomorrow I want to be the highest Honda to Qualify for Sunday's race."

Taya Kyle called her ride today with Mario Andretti in the INDYCAR Experience two-seater on the 1.968-mile Long Beach street circuit “the experience of a lifetime."

The widow of Chris Kyle, the military hero whose life was depicted in the feature film “American Sniper," helped make for another’s lifetime experience when it was announced in Long Beach that Sonny Saghera, a captain for Heartland Fire & Rescue in Le Mesa, Calif., will be a member of the CK Crew that will participate in the TAG Heuer Pit Stop Challenge during Miller Lite Carb Day at Indianapolis Motor Speedway on May 27.

The CK Crew is the team of military veterans and first responders being assembled by PIRTEK Team Murray to compete in the pit stop challenge on the weekend of the 100th Running of the Indianapolis 500 presented by PennGrade Motor Oil. The honorary CK Crew will go up against the regular fulltime pit crews of other Verizon IndyCar Series teams, but Saghera is not concerned.

“I am looking forward to it," Saghera, 43, said. The pressure is not going to get to me. I work under pressure all the time; it’s nothing new to me. We train for situations to expect the unexpected. I am just looking forward to the overall experience of doing this.

PIRTEK Team Murray is entering rookie Matt Brabham in the Angie’s List Grand Prix of Indianapolis and the Indy 500. Brabham hopes to become the third third-generation driver to race in the “500," following his grandfather Sir Jack and father Geoff.

The team has partnered with the Chris Kyle Frog Foundation to bring a group of military veterans and their families to Indianapolis for race weekend and to compile the CK Crew. Warner Bros. Home Entertainment is also backing the project as it releases a commemorative Blu-ray disc edition of “American Sniper" in May.

Saghera is honored to be part of the initiative.

“It really didn’t sink in until I got here today," he said. “I did some research, I did some reading, but to actually now be here and be part of this and see what is going to be expected of me, it’s an unbelievable feeling.

Taya Kyle is also serving as honorary starter this weekend. She will wave the green flag to start the race April 17.

NFL Pro Bowler Terrell Owens stepped out of the INDYCAR Experience two-seater today, calling his thrill ride around the Long Beach circuit with Mario Andretti at the wheel "a roller-coaster ride."

Back when he was playing for the Cincinnati Bengals in 2010, Owens took a similar ride around the Kentucky Speedway 1.5-mile oval. But the experience on the street circuit at the Toyota Grand Prix of Long Beach was different … much different.

"I don't remember it being this awesome," Owens said. "Maybe it was because I was riding with Mario Andretti, the legend, but this was like the equivalent of a roller-coaster ride. This is much more fun."

During the high-speed ride, Owens even considered all the waivers he had signed in advance of the ride.

"I got in and I was like, 'So this is probably why I was signing all this stuff.' I think I signed my life away," he said. "It's unfathomable how fast we were going. It was an awesome ride. You talk about an adrenaline rush, that was it."

Owens spent the day at the track, reporting from the grand prix for the Rich Eisen Show. He taped a segment to air at 10 a.m. PT April 18 (on DirecTV) and spent time with Chip Ganassi Racing driver and Indianapolis 500 winner Tony Kanaan. Mark Cipolloni and Lucille Dust reporting from Long Beach